It’s here once again! That long-awaited, frightful week leading up to Halloween, and Runescape has come up with a holiday event that, in my opinion, is fairly good.

To start off, head over south of Falador (near Port Sarim) and you will see that a portal has appeared around the area. As you get closer to it, the brightness will start to diminish (a neat trick). If you don’t wish to walk around squinting in the dark, then enter the portal. 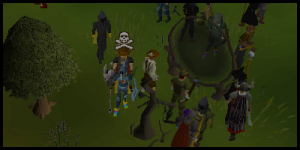 Once you get warped, you’ll realize you’re in a house of some sort. Keep walking and you’ll see the one and only Grim Reaper, sitting upon his throne. After talking to him, you’ll find out that he wants you to tidy things up around his house because his old servant “took a turn for the worse,” according to Runescape’s main article. You hesitantly offer him your services. 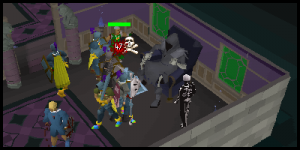 The first thing he asks you to do is to go out to the garden and find a skull, then return it to him. The garden however, is a maze of spider webs, some which you can get through and some which you cannot. You’ll have to figure out which spider webs are accessible to reach the skull. The maze itself, however, isn’t that large so it won’t take a very long time. 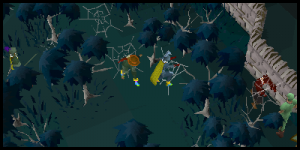 The second thing he asks you to do is go to the lounge, search for misplaced items, and return them to where they belong. A diary is on a table in the lounge, which you can use to find out which items go where. 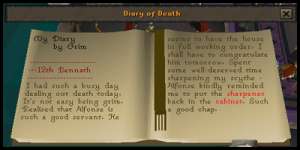 You’ll have to look through every searchable place/object to find each item you have to put back. After that it isn’t too hard to put everything where it belongs with the help of the diary. 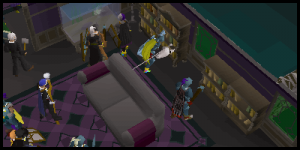 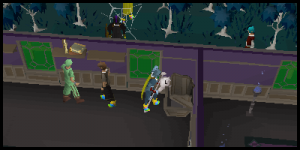 The last thing he asks you to do is to go upstairs and try out an obstacle course he made to make sure it works. This part reminds me of an agility course (except you don’t get agility experience). The first thing you do is slide down a slide (interesting cutscene for this part). 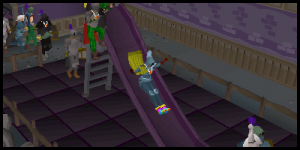 The second thing you do is jump across a bunch of gaps using spring boards. 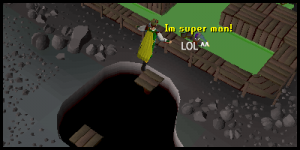 After you jump over the last one you’ll land in a little river of slime, which you must navigate. 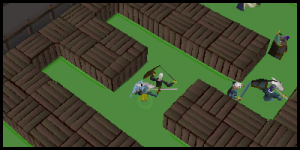 After you climb out of the slime river, you’ll have to go through an area of trapdoors. If you’re unlucky and fall through one of the trapdoors, you’ll have to do the whole course over again. 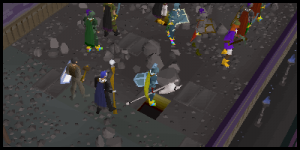 After you reach the end the first time, you find out you have to do the whole course one more time just to please the Grim Reaper. Being the obedient pixel person you are, you oblige. After completing the course a second time, the Grim Reaper, after some disgust, will give you your reward – a replica of his hood, coming with a zombie hand emote. With that, you’ve finished the 2007 Runescape Halloween Event. 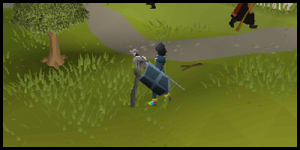 I personally thought this was a pretty good holiday event. It was a lot more fun than the Easter event (grabbing kebbits and bowling …not too entertaining). I liked the obstacle course the best, because this part made this Halloween event the first holiday event that I got agitated doing. I fell through the trapdoors twice so I had to do the obstacle course four times, but I still enjoyed it every time surprisingly. The garden maze was also nice seeing as it was somewhat of a challenge to try and find the right spider webs to go through. I would have liked if it were a little bit longer, but that’s only a minor thing. As for the reward, the hood looks decent and so does the emote. Overall, I’d say good work on Jagex’s part.