With Runescape growing in numbers every day, Jagex always has to do their duty of fixing the game and making it better! They recently released a handful of updates that would hopefully help new people and not annoy the many older players (which currently isn’t working; that town crier bell is getting to my head).

With this new trading interface, you are now able to view how many free inventory slots the other player has. It will also show you if an item has been modified, placing a large red exclamation point over the place where the item used to be. This should certainly help eliminate a lot of the scamming that goes on in-game. 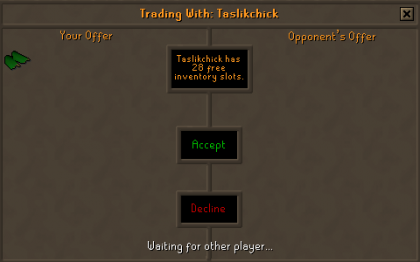 The “make-x” option has now been added to many cooking options, such as “the three p’s” as I call it: pies, pizzas, and potatoes. Other places include amulet stringing, potion making, glassmaking, gem cutting, orb attaching, leather making, and other crafting/different skill areas.

This has proven to be a nice change to members who were annoyed with the many warnings that popped up in places such as the Desert Pass. Places that used to have warnings will no longer display them unless you choose for them to do so. Newer players will still see the warnings, but older players won’t. There is also a new NPC dwindling around in Lumbridge known as Doomsayer, who will show and explain to you the new warning interface.

Possibly my most favorite update (sarcasm), town criers have now been added in Falador, Varrock, Draynor, East Ardougne, and Seer’s Village. They’re basically men waving an [annoying] bell who, if you speak to them, will tell you about the rules of Runescape and about player mods (if you don’t already know).

-You will now get a warning if you try taking a 2h weapon into a 1h duel.
-Kebabs no longer take away hp and will take away another skill.
-Magic logs now have a little green glow.

A new random event is here, and some have been removed. This one is known as a Surprise Exam, given by Mr. Mordaut. The Mysterious Old Man will teleport you to this eccentric classroom that is headed by a teacher known as Mr. Mordaut (a dragon).

You will be tested on your knowledge of basic patterns and puzzle solving. One of them is your simple “which one comes next” pattern, which is very easy.

The other puzzle that you might get is slightly harder. You are given fifteen objects and a vague clue. Using the clue, you must discern which three objects the clue is talking about.

If you complete them all correctly, you will be awarded with a Book of Knowledge that gives you experience in a skill of your choice (like the Genie Lamp).