Any gamer could tell you that Gears of War 2 is coming out this November, and they’d also tell you about how they’ve been wetting their pants over gameplay footage for the past few months. But a month and a half is a little long for the average gamer to sit and wait for the most anticipated sequel of the year (yes, even more than Call of Duty 5: World at War). And considering the original Gears of War was released in November 2006, one more month of waiting can feel like an eternity. But have no fear! For the Xbox 360 actually does have some other worthwhile games to checkout while you suffer your agonizing wait. This week, we’ll be looking at the newest “rhythm game” out on the market, which is sure to last you countless weeks, or dare I say months, of addictive gameplay.

Released on September 15th, 2008, Rock Band 2 is quickly becoming one of the most popular games on the market for now. And why shouldn’t it be? Over the last year, Rock Band developer Harmonix have fulfilled their promise of downloadable songs available every week since the original Rock Band launch. With a promise of over 150 more songs by the Christmas break, Rock Band 2 is sure to keep you busy well into the holiday season.

Before you even think about playing the game, you need a band. So get a couple friends and decide which instruments you want to play. I can’t stress this enough: Rock Band is a multiplayer game. You aren’t going to get the same experience if you’re playing by yourself. If friends aren’t your cup of tea, then go to the matchmaker and find band mates who are in the same situation. Once you’re ready, it’s time to create the character you will be using. Unlike Rock Band 1, in which you needed different characters for each instrument, Rock Band 2 allows one character to play all the instruments. Using the vastly improved character creation, you can make some pretty unique characters. Now comes the most important part: choosing your instrument. Whether it be guitar, bass, drums, or vocals, select the instrument and get ready to create a band. You can choose the name of your band, your motto, and create your very own band logo. 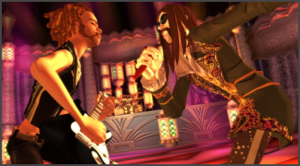 Now that all the customization is out of the way, it’s time to actually play. Rock Band 2 is no walk in the park though, so don’t throw yourself right into the Expert difficulty. The chart difficulty has been increased this time through, so you won’t be finding yourself getting 100% on every song like you did in Rock Band 1. Songs such as Painkiller (Judas Priest), Battery (Metallica), and Visions (Abnormality) will give you a run for your money. There are also a wide variety of different gigs this time, such as a video shoot or a charity concert. Gigs like these aren’t on the list for you to choose, rather they come up unexpectedly (much like in real life), and will allow you to choose to do the special gig for extra fans or money, or continue to do the set you intended to do. These special gigs give more variety and opportunities for more rewards. But beware, if you fail to meet the requirements of a special gig, you’ll find yourself losing not just fans and money, but your dignity as well (and that’s never good, is it?).

Now that you’ve tried out World Tour mode, gained millions of fans, bought your own private jet, and made millions of dollars, what else is there to do? This is where the new game types come in. The new Battle of the Bands feature is quite impressive on Harmonix’s part. Harmonix have pledged to keep Battle of the Bands updated with new challenges every week for a long time to come. Challenges are posted via Xbox Live onto the game every week (sometimes new challenges appear for a day and are replaced with new ones the next) and bands are given the opportunity to see how they face up to other bands around the world. Last week a challenge was put up, “Saturday Rap Battle”, which required solo vocalists to get their highest score possible on So Watcha Want (Beastie Boys), Give it Away (Red Hot Chilli Peppers), and Testify (Rage Against the Machine). It’s really interesting to see what new challenges will be posted and to find out what your rank is amongst the other players.

Solo mode has been completely removed from Rock Band 2. Instead there is a Challenge mode. Challenge mode can be played either solo or with a band, as is World Tour mode. However, the challenges are quite linear, in the sense that you choose a challenge, complete it, and receive a new, harder challenge in return. Downloadable content has always worked it’s way into the challenges, so you can participate in the Crue Fest Challenge, with Papa Roach, Trapt, and Motley Crue, or try out The Who Challenge, a setlist with all your downloaded Who songs. You also obtain money for completing challenges, which you can spend on new instruments and clothing, so doing challenges isn’t only fun, but rewarding in the long run.

Along with the previous features, the online face-to-face multiplayer has barely been touched. There’s still the standard Tug-of-War, in which competitors must play different parts of the same song, and Score Battle, where players try to get a higher score than the other. One thing that has been modified is the Trueskill ratings online. Now, instead of going down 5 levels from losing one song, the Trueskill actually reflects your skill, going down one level if you lose a couple songs, and going up for winning. This way, you can really tell how good your competition is, and see how you rank against the world on the Rock Band Leaderboards.

So, you see, there is some hope for you after all. A month and half doesn’t have to feel like forever. Go ahead and pick up Rock Band 2 and strum your life away until your precious Gears of War 2 comes out. But don’t say I didn’t warn you when you can’t put Rock Band 2 down even after November 7th.