Minor spoilers to Extinction. You have been warned. The fact that you’d rather read my insane ramblings rather than experience this quest yourself, though, tells me you probably deserve things spoiled. If I spoil anything, then I’ve lost all respect for you and thus am not sorry. Again, you have been warned.

It’s the start of April, and a brand new Grandmaster quest came out in RuneScape! Grandmasters are special quests that take place all throughout Gielinor. They have a ton of high-level requirements, spanning hundreds of quests and hundreds more level requirements, mini-quests and boss kills included. The culminations of entire MONTHS of hype-building and preparation, spanning the development of God Wars 2, Sliske’s saga, the discovery of Senntisten, the build-up of the Elder God Wars, and the development of the Elder Gods themselves through animated videos and stellar voice-acting. All of that, coming to this one final quest that ties up all loose ends, answers all questions, and decides once and for all the fate of Gielinor itself!

And I beat it first-day. 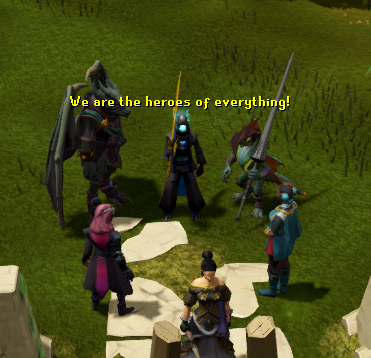 … yeah. This one’s not really that long. Took me a lot more effort to beat Mourning’s End Part 2, and that too was on its Day of Release. No fancy EoC tactics; you were in there with an inventory of prayer potions just to stay alive with. Even One Small Favour took me longer to beat (it came out on RSC and I also did it on Runescape Old School, so that means I technically did that quest twice).

I know what you’re thinking. What the heck? Why’s this a Grandmaster Quest when there are other, much harder quests that are stuck in lame ol’ Master?

I’ll tell you why; because it’s a freakin’ EPIC quest!

Games are very different from books because books rely solely on words to get an audience invested in it. They have to describe and build up characters and settings, immersing the reader into the world and making them either emotionally (relatable characters) or curiously (murder mystery) invested in it, for otherwise they would simply not bother continuing. Once this establishment is made and the reader is invested, that’s why the story builds up to its conclusion, and the reader is hit with a bombshell when their favourite character suddenly disappears from the equation, either by death, vanishing, or revealing that they were the bad guy all along!

BOOM! Jaws drop, and so does the book. It’s numbing, but more importantly, it’s impactful. All that investment, all to have it either paying off or crashing down around you. This is the journey of a reader, and the end results come to fruition. This is why folks like reading. So do yourself a favor, pick up a good book, and give it a go; it’s really cool.

Aaaanyways, RPG games do it differently. Rather than introduce the player to a hero character, the players themselves CREATE the hero, either from a template or from scratch. Then, it’s through in-game interactions with other NPCs, described in intricate detail and flushed out with several interaction options, that the player becomes invested in these characters. Rankings are established, favorites are made, and in some cases, even favored religions are chosen. 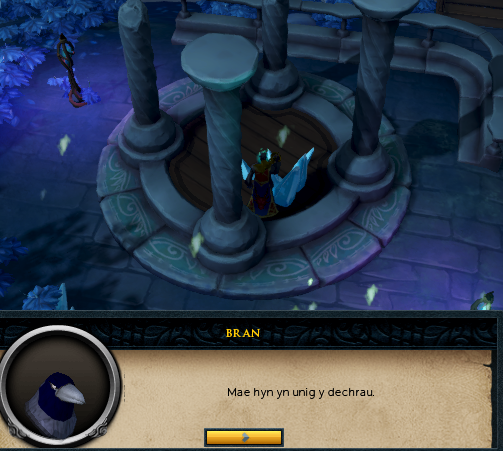 Not saying that some religions are better than others, of course. It really is up to the player themselves.

Like books, there’s a procedural escalation to games, but once again, it’s not focused entirely on the character. As the player plays, it’s not just their character who grows and improves; they themselves grow and improve. They learn new tactics, figure out new strategy, and understand boss mechanics the more they play. Thus, when a story enters the climax and starts reaching towards the conclusion, there’s no way it won’t be underwhelming if the final stretch doesn’t push the player to their limits and test them to the extreme. The constant build-up and experience comes to fruition. Otherwise, if a game didn’t have at least that, then the player would be left with a sense of dissatisfaction. All that effort and time for nothing! Ridiculous!

In a nutshell, when you have reached the conclusion to a story, it’s gotta be epic and impactful. Characters are gonna die, and players are gonna cry.

So, with that in mind, how was this quest? Was it hard? Again, Mourning’s End Part 2 was much harder when I played it back before EoC; I didn’t die much during this quest (the part with Erebus doesn’t count, dying’s actually a mechanic there needed to progress). Honestly, I’m a little disappointed that it didn’t really make me sweat like some crazy fights RuneScape had to offer, but methinks I had myself to blame for that because I went in full-bore with my best equipment, and it kinda ended up being a bit overkill.

… OK, no, that’s a lie; I wore ports armor and relied entirely on a blessed flask and soul split for healing. Could’ve definitely have been harder. Combat; boss itself was epic, but it didn’t really push me much.

The single main puzzle of the quest wasn’t that bad. I loved the full no-help exploration aspect of it where we got some advice here and there by an appropriately blind-to-the-events third party, and I’ll admit, I had a moment of satisfaction when I realized what I was actually supposed to do after several attempts at everything.

As for the music and visuals, I have NEVER had anything negative to say about those. Beautiful! Mwaah, masterpiece material! You guys on the Jagex design team knocked it outta the PARK with this quest! Saving grace right there; I would’ve been, Armadyl forbid, ‘disappointed’ in this quest if it were not for the awesome immersion!

Also I broke a dragonkin.