Ever had a Goblin community drill holes in your kitchen’s basement? Are your personal bridge guards being murdered by Goblins? Or perhaps you have a Goblin community building underground train-connections to far away Dwarven communities beneath your peaceful city? 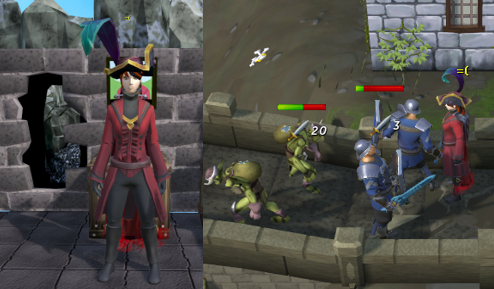 Apply now to our open vacancies at the H.A.M. Association. Some may call us radicals, but we’re just a group of humans with some good ideas and a great sense for fashion! We’re devoted followers of the Lord Saradomin, who will stride towards creating a safer Gielinor for all humankind. (Writer’s Note: the H.A.M. organization is currently occupying my office, so this article is biased towards their propaganda. I will try to sneak in some “writer’s notes” to make it more factual). 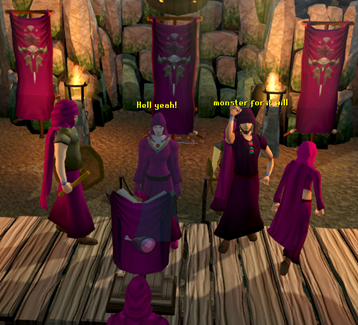 Why should you join us, you ask? In the Year 164 of the Fifth Age, Asgarnia was attacked by a vicious monster. For a long while this monster, a Werewolf, terrorized innocent human travelers on the way from Taverley to Falador. As defenders of humankind we swore to end this tragedy, but we were sadly misinformed, and so Martin Thwait and his men burned down the wrong house. If we had received more support from the White Knights, we would definitely have given Doric a warning before burning down his hopes and dreams. The moral of the story however is that monsters terrorize Gielinor and we need all the help we can get to rid ourselves of this plague. (Writer’s Note: you were convinced that a dwarf was responsible for these attacks, who were clearly done by a werewolf? Sounds more like you used it as an excuse to get rid of him.)

What do we do? We’re very skilled movers, as we’ve moved our entire underground base across a river. Furthermore we take action to protect the people of Gielinor. For example, our legendary member Sithik Ints. This man recruited a fellow called Brentle Vahn to bring a necromancing bomb to the Ogre burial grounds south of Yanille. Thanks to his work the undead Ogre returned to kill the living ones. How convenient was that? Sadly the now so called “World Guardian” put an end to that plan, and our hero Sithik is imprisoned as an Ogre in Yanille. The poor man has been turned into a monster, how cruel. (Writer’s Note: who knew a mad man would get imprisoned for starting an ogre genocide).

Besides regular members, we’re also looking for influential people like a Duke, King or a rich family head to support our course. Our last patron, Duke Horacio, revoked his support after signing a peace treaty with the recently discovered tribe of Cave Goblins known as the Dorgeshuun. Sigmund, the former advisor of the Duke presented evidence that these Goblins stole from the Duke. That darn World Guardian intervened again and somehow “proved” to the Duke that it was a ruse by Sigmund to incite a war between Lumbridge and Dorgeshuun. (Writer’s Note: I mean, Sigmund literally had the stolen silverware stashed in his personal chest.) The cave goblins are supposedly peaceful, and yet we found the World Guardian and a Goblin girl named Zanik trespassing in our hideout. The Goblin girl shot at least four of our favourite guards. After ridding ourselves of that Goblin we decided to rid ourselves of the problem that is the Cave Goblins in the most humane method possible; We tried to flood their caves. Unfortunately, the World Guardian escaped and even revived that Goblin with help of a giant snake called Juna. Together they destroyed our magnificent and very expensive drill, and attempted to murder the great Sigmund. Sigmund, unafraid as the man was, attacked the murderous Goblin tribe to the north of Falador. Here, he once again faced Zanik and managed to capture her. Instead of ending her life immediately, he tied her to the train track. Her death would derail the train and incite a war between the Dorgeshuun and Keldagrim, ridding ourselves of two problems at the same time. Alas, the World Guardian meddled with these plans once again and Sigmund barely escaped with his life. (Writer’s Note: I really don’t see how you guys can call Sigmund a hero. All of his plans were to start a war and kill hundreds of innocents).

With these recent defeats our morale has been low. Some have even spoken about giving the Goblins a chance. For example, my buddy the merchant, Walton, traveled to the Goblin city to sell his goods. (Writer’s Note: Walton was a member of the H.A.M.) For some miraculous reason, Goblin children became very ill during his stay down there, so they blamed him for it. (Writer’s Note: Maybe because Walton poisoned the food he sold to the goblins?) He was supposed to get a fair trial, so I had faith that he would be freed of all charges in a matter of time. I was wrong. The cold-hearted goblin Zanik murdered him before he made it back to the surface. (Writer’s Note: remember that Zanik was possessed by Bandos at that point. Also she got exiled for this deed) That’s not all though. Sigmund was staying with our brethren of the Ardougne branch. While he was interrogating the criminal Goblin, Grubfoot, Zanik attacked the base in the name of the War God, Bandos. (Writer’s Note: possessed actually) Sadly, this time Sigmund did not make it out alive. To add insult to injury they unveiled a statue in honour of the World Guardian and Zanik, the two monsters that have been the cause of all our problems.

As you can see, we need new members and new powerful patrons to help us save the Human race from these monsters. You may wonder what we’re up to right now; Currently we’re recruiting which is why we’re currently holding this month’s Forgotten Lore writer hostage, so we can post this advertisement of our magnificent movement instead! Join H.A.M. now, we have pink merch!

(Writer’s Note: Thank you for reading this strange version of this month’s forgotten lore issue. I have to clarify that these people are cruel and also pretty lazy. Most of their plans are to have others do cruel things to non-human races. Another note: we really need better security in this office if even H.A.M. members are able to take control of it. See you all next month for Forgotten Lore XIV!)