Mother(s) of All Dinos – Rex Matriarchs and Mid Tier PvM

The Rex Matriarchs, delayed following the great lockout of 2021, finally graced the now packed island of Anachornia in April. The design team billed the three bosses – Rathis, Orikalka, and Pthentraken – as the spiritual successors to the famous Dagannoth Kings. A trio of bosses representing the combat triangle, only killable by its style weakness. The bosses were intended to be somewhere in the low to mid-tier range, nestled snugly in the relatively un-occupied space between God Wars Dungeon 1 and God Wars Dungeon 2. The drops were intended to be good, but not great – something unique, but nothing overpowered from such accessible and easy to defeat content. In all, aside from some release day accuracy issues which were swiftly fixed [these bosses have some of the highest defense in the game which resulted in tons of splashing on release which was soon nerfed], the bosses were a big success in terms of being as advertised.

Additionally, the area, NPC artwork, and animations are vibrant and beautiful – something that I believe is increasingly important in lower levelled content to introduce players to what RuneScape is capable of delivering. The graphical gap between now ancient content like God Wars Dungeon 1 or the Queen Black Dragon, who previously occupied positions as the only real entry-level PvM bosses and the Rex Matriarchs is enormous, and I’m glad they took time to be creative with the designs of these dinos. 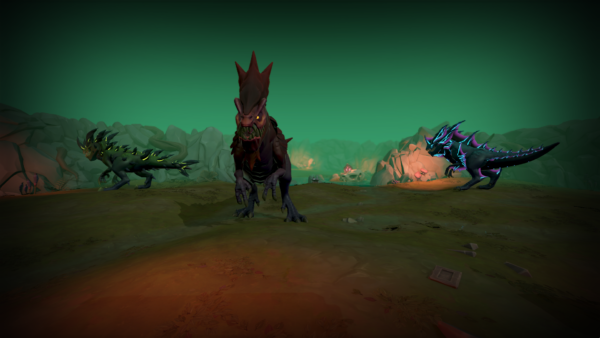 Whether devoting bossing development time to lower/mid tiered bosses is worthwhile is a separate question, it is both easy to see these bosses as dead-on arrival except as yet another tedious requirement for titles such as Insane Final Boss or Golden Reaper, and also to see these bosses as precisely what Jagex needed to give us.  For this article, I’ll briefly cover strategy/mechanics and the rewards before elucidating a deeper discussion about the purpose of bossing in the modern game.

Since their intention is to be highly accessible content to even relatively new players, the mechanics of these bosses are straightforward and easy to grasp. Each boss has its own side of the combat triangle – melee (Orikalka), ranged (Rathis), and magic (Pthentraken). Each must be taken down by the opposing side of the triangle – magic, melee, ranged respectively. Just like the Dagannoth Kings, using a different style from the bosses weakness makes them functionally invulnerable to damage. This forces either a hybrid playstyle or focusing on just one boss at a time. Alternatively, players could team up in groups and divide up the bosses based on their chosen combat style.

Each has its own special mechanic. Orikalka, probably the most annoying, would freeze the player drastically slowing down ability cooldown and creating rifts that cause damage when stood in [I would highly recommend entangling her repeatedly so you never even get attacked]. Rathis, by far the easiest, simply launches poison pools which can be reduced to negligible damage with anti-poison ++ potions or the venom blood perk. Pthentraken, who hits the hardest by a good margin, can set lightning onto the ground, and can send a beam of lightning down on the player, all of which can be easily avoided. For those learning prayer flicking, Pthentraken presents an excellent opportunity to prayer switch between praying magic, ranged and soul split.

In all, I would put these bosses exactly where Jagex advertised – right between God Wars Dungeon 1 and 2 in difficulty, right in line with the Queen Black Dragon. For those interested in just camping them for pets/title, I’d recommend getting as much kill count towards thresholds as possible at Rathis, as she can be fought entirely AFK either with a berzerk bar while on task or with a vampirism scrimshaw, or with a less DPS but safer bar featuring Pulverize which won’t require a vampirism scrimshaw. Assuming decent perks/armor, venomblood or antipoison++, and a ripper demon, you should never need food. A penance aura can fully sustain prayer as well.

Did we need these bosses?

This is a complicated question – and one worth exploring in further detail. I think the answer depends a lot on your perspective. From the perspective of a high level PvMer, these bosses contribute very little to what makes PvM interesting and fun. For two of the three bosses, they’re too repetitive and uninteresting to be engaging, but have mechanics that are too punishing to AFK. They’re in that middle tier between an exciting challenge and something that can be done while playing an alt, doing work, or watching a favorite show.

However, they also represent important stepping stone for learning higher level PvM. Getting used to weaving in entangle or vulnerability at Orikalka can help later on for more difficult content like Telos. As mentioned above, Pthentraken is an excellent place to learn prayer switching which is crucial at places like Raksha or Araxxi as well as dodging ground-based mechanics. While the rewards aren’t too valuable, an occasional 10m drop in the form of a spear piece still makes the content worth doing for lower levelled players or players new to PvM. I think for the overall health of the game, they’re a  great addition and work as intended.

In terms of the rewards, it feels a bit misguided. The four heart drops corresponding to the four types of rings dropped by the Dagannoth Kings (warrior, archer, seer, berserker) represent the games new best in slot rings. Adding items that create a best in slot item to mid-tier PvM doesn’t make that boss more profitable (they’re so easy to farm in mass and have no relevant sink such as good invention components that the hearts are worth very little) yet they make upper end PvM such as Solak even easier, with a ring like the Berserker ring representing a flat dps boost with no downsides at low-defense bosses and the seer ring being a big upgrade.

Additionally, until something is done about death costs – which is the topic of a previous article I’ve written for Informer – the rings are mostly not-viable, as the small dps boost isn’t worth spending 12-15m to recover items from deaths office compared to using a Ring of Death. The spear, however, is very cool. It’s a viable alternative to the highly priced Noxious Scythe for nearly all low-mid level bossing and slayer content as well as being stellar for Elite Dungeon 3 trash mob runs, which are still the best xp, best source of blue charms, and best low-requirement money maker in the game. In general, I think the rewards are fine – I wish the rings had been implemented differently either to create a better sink for hearts or couple them with a change to death costs to make them more viable, but the spear is excellent and an enormous upgrade for mid-levels.