Divination got an update. 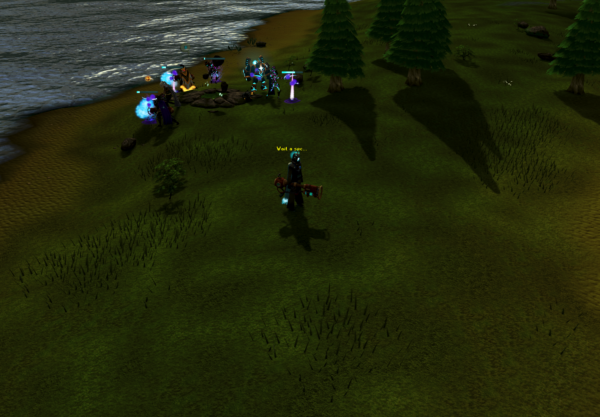 It makes the skill a bit more compact and easy to train. Woo.

I’ll go into details. The springs last a lot longer now, increasing in duration the more people interact with them. Plus, they now hang out much much closer to the well. Basically, it’s a lot less clicking to get to the good stuff. Which is pretty awesome if you like to use divination to let Runescape sorta run in the background as you do other stuff.

Like I do. Admittedly, I often like to have Runescape running in the background while I do other things like draw, watch videos, or sometimes work. Sometimes I’ll even play another, more involving game like Destiny 2.

Runescape’s an awesome game, but a lot of the things you do; grinding, training, even some combat… all of that involves a lot of waiting. Waiting for resource gathering. Waiting for a task to complete. Waiting for an NPC to fall. If it wasn’t for the lovely vibrant colors, soundtrack, and involvement that a game can provide, it would be little different than waiting in line at a grocery store. There’s little helping it; a point-and-click game like Runescape will always be like this because that’s just its style.

So that’s why we multitask. We allow ourselves to do other things while Runescape runs in the background.

Back in the days of Runescape Classic, being AFK was once grounds for being reported. People would proactively go around reporting other players who simply wouldn’t respond to them with a “hello” under the pretense that they aren’t actively at their computer. All in the hopes that they would score enough brownie points with the company to become a player mod, mainly because it’s similar to a party hat in maintaining a unique image, which I’ve highlighted in several past issues.

Kind of unreal, right? A game like Runescape, not allowing AFKability? How could that have ever been a thing?

Let me take you on a little journey through how Runescape used to do things regarding the ability to remain AFK.

In older Runescape Classic, when it was run and managed by the Gower brothers, they originally didn’t care too much about this. Players did what they want. They played avidly, they played AFKingly, and they even botted, back before there was even a Report Abuse button. I even saw the appeal in it, having a program that kept my character online and mining resources for an overnight’s work of exp. But it didn’t last, and I decided Runescape was more worthwhile if I did the work myself.

Eventually, botting did become an issue, and so the simple solution was to allow players to report AFKness. Back in 2001-2002, Runescape specialized itself on being a multiplayer socializing game; useful for talking with people and helping folks interact with one another through chat. This was before the days of Skype, Discord, and the like, where internet contact was 95% chat-based. Ergo, chances were super-high that players, when they were playing Runescape, were talking, and were therefore responsive.

Of course, as the game became grander and the need to eradicate bots became much more sophisticated due to legal issues with real-world trading, a much more elaborate AFK counter-measure was created. The Random Events; literally random events that players had to consciously react to in order to prevent potential catastrophes like being teleported, losing equipment, and even dying.

This was a solution to the AFKing being any real issue, and so it was removed from the Report list. Not many players liked this, however, because that meant they really had to commit to all this waiting and training. So, naturally, they found ways around it. Smarter bots that knew how to handle these random events. It got out of control. Then came the bot nuke, the trading restrictions, all that stuff.

And now, with much more sophisticated algorithms helping keep bots at bay, random events were removed, and a whole slew of skills got the Make-X treatment. The ability to AFK became acceptable again.

After all, it’s a game. We’re in it to have fun. And if a game’s not fun, then we don’t want to play it. It’s our desire, and it’s their business model, and it’s awesome to see how well it works.