In short: it was awesome and you should definitely experience it by going in blind.

In long: … hoh boy, why does everyone always want it in long?

NOTE: As always, there are spoilers for all sorts of quests here. If you read them and stuff gets spoiled, it’s your own fault. You should’ve been doing all these quests from the day they’re released. And you call yourself a RuneScape fan…

Azzanadra’s Quest is the next in the long series that, for the moment, defines RuneScape. Everything we’ve done; all the skill training, the questing, the bossing; all of that we have done is leading up to this great story that holds the fate of the world and the rest of the universe in jeopardy. If we don’t stop this great threat that threatens even the lesser Gods themselves, then all that we have done; all our trillions of coins and quadrillions of exp… will be gone. Poof. Out.

… yeah. I like having all my stuff, thanks. Let’s stop Gielinor from getting exploded please.

So, let’s summarize how we got here for a bit. The series started with hints and clues to the existence to the Elder Gods by gradually revealing artifacts and things like the Stone of Jas, the names of the Gods, the existence of Mah, and the Dragonkin’s curse. A bunch of things that hold their own questlines, all centering around the powers and capabilities of divine beings beyond comprehension. Couple that with the introduction of the Gods themselves and the starting of a new God Wars that ends in Sliske’s Endgame, and we’ve finally, at long last, reached the point where we now understand what the entire plot of RuneScape is.

Yes. Almost 20 years later, and we’ve finally finished the introductory chapters of RuneScape. Now, @#$% is about to get REAL.

The main players in this story, aside from you, are Seren and Zaros. They are the most Godly of the Gods, and like you, they both seek to stop the Elder Gods in their own ways. Seren hopes to unify Gielinor’s races and appease the Elder Gods through worldwide collaboration, while Zaros intends to become an Elder God himself so he could convince them to stand down.

Of course, neither side have been making much headway, and we are running out of time. We ended up getting sidelined by Kerapec who put his own spin on the situation; destroy the Elder Gods by blowing up Gielinor. … which is the “we lose our trillions of coins” result, so that needed to be stopped, ironically, by the Elder God Jas herself. 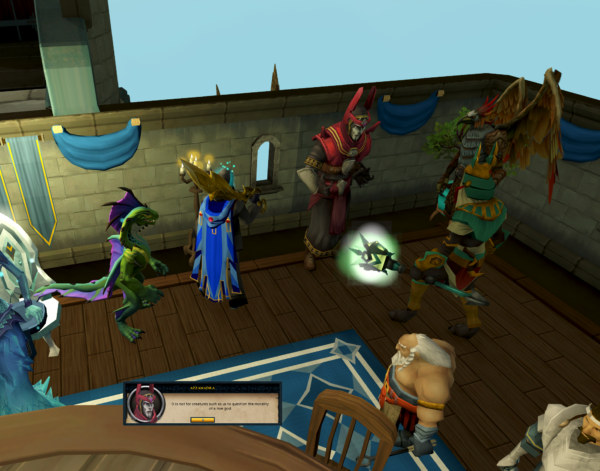 So, that’s where we had last left off, and Zaros’ bro-fist general, Azzanadra, decides that we cannot rely on Seren, and asks our help in locating the Elder Halls so that we can better figure out how to deal with this threat. Zaros does have the whole “knowledge is power” shtick down pretty well; I’m surprised he doesn’t get along well with Saradomin… foreshadowing… 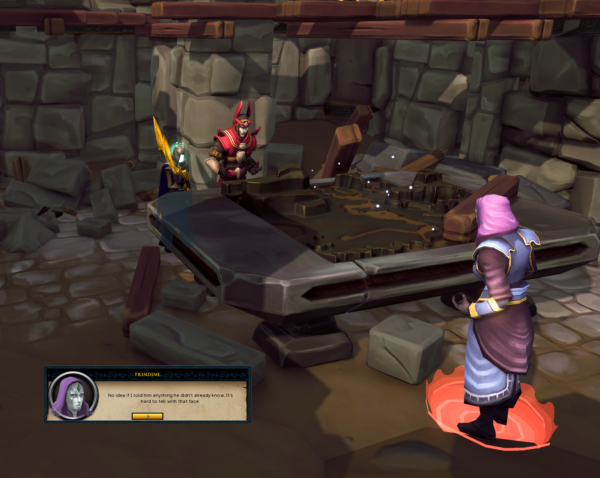 Fortunately, you’ve got a new helper. Trindine, who is a Mahjarrat that was sealed away into the shadow realm for a good long time, and by pairing up with her, Ariane, and Sir Owen (signature heroes, yay!), you begin a long and arduous quest that may or may not have taken a page from One Small Favour (yay!) to seek out the Elder Halls. 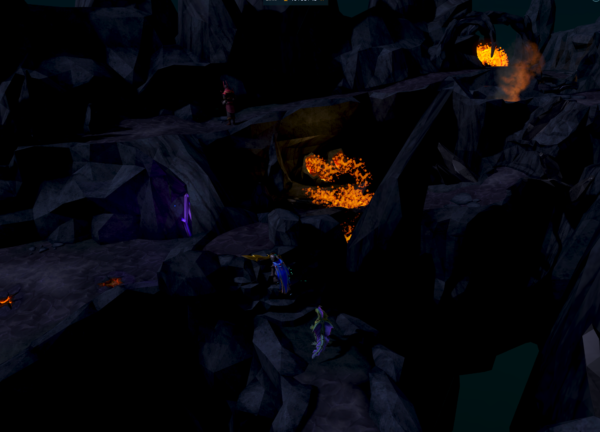 You start by following Azzanadra around on Freneskae (excellent reuse of game assets) and investigate the egg debris. With Ariane’s help, you start understanding how the Elder Gods plan on destroying Gielinor. Or rather, how it’s but a side effect of their true goal. You learn how Freneskae is destroyed via epic voice-acted video, and since it’s a cycle-based event, you can attribute it to the current issue at hand. 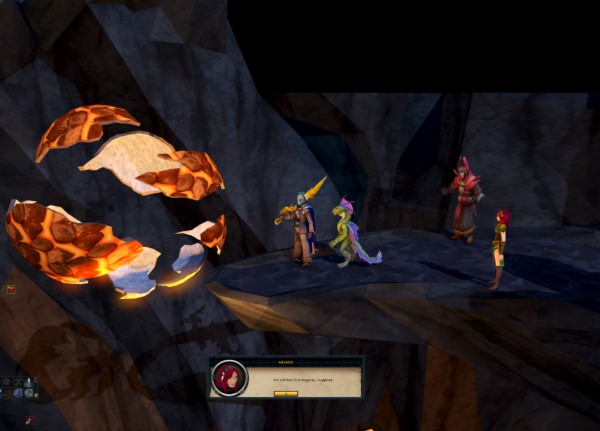 Fortunately, you’re already a few steps ahead. Mah never escaped Freneskae and Jas turned her egg into the Stone of Jas, which means we only have 3 Elder God eggs to worry about rather than 5. That helps make this task feel quite a bit more doable; perhaps with their more limited numbers, a compromise might be possible.

This is known as pacing in storytelling. While that would be neat to have a deus ex to save everything, it doesn’t flow well for the story, which until now, has been nothing but buildup. That would be the lazy way to end things, and it would lead to the most disappointing quest in RuneScape history.

And we can’t have that. Quests are awesome! 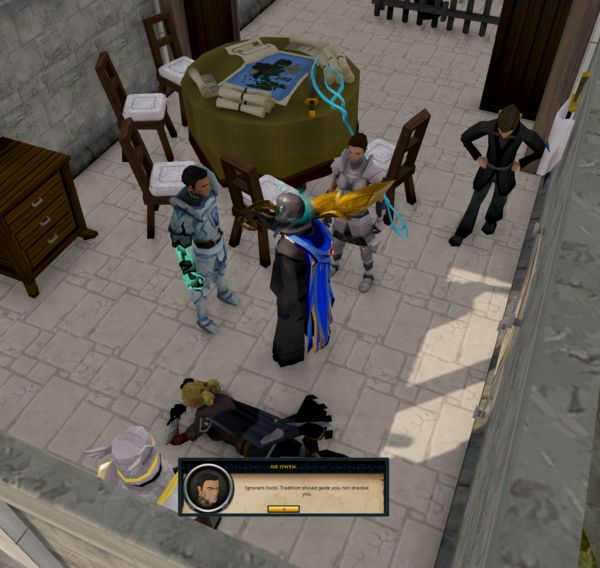 From there, we start brainstorming ways to figure out where the Elder Halls are. We start by asking for Saradomin’s help, as he’s got an elder artifact that lets him locate others. After doing the white knights one small favor (heh heh…), Saradomin admits that his crown doesn’t let him find the Elder God Eggs, as he’s tried it himself. So, that was a bust.

Then, we go around researching into the Elder Halls using bits and scraps of information we can salvage from large sources of info, like the Wizard’s Tower and Guthix’s Memory Archives. 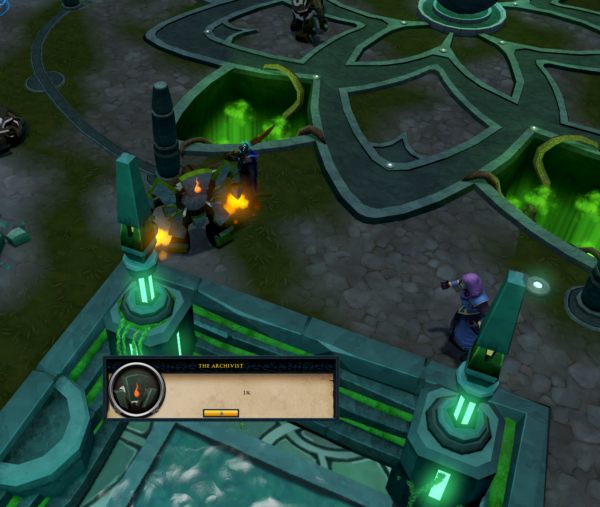 Now, if you guys remember from the Mahjarrat questline, this is exactly what we did for the buildup to the Ritual of the Mahjarrat quest. We helped Ali the Wise gather up bits and pieces of these powerful characters and prepared ourselves for the great and final battle, where all these mahjarrat appeared and fought this crazy war. And despite the chaos, we all knew exactly what was happening because we had affiliated ourselves with these characters before. This is how final battles in video games play out and what makes them so epic; their familiarity. How you know what to do, who everyone is, and why they are even fighting; all before the battle even begins.

That’s what we’re doing right now. Getting bits and pieces to the whole truth, just like how long storybook series usually go. A tried and true formula. 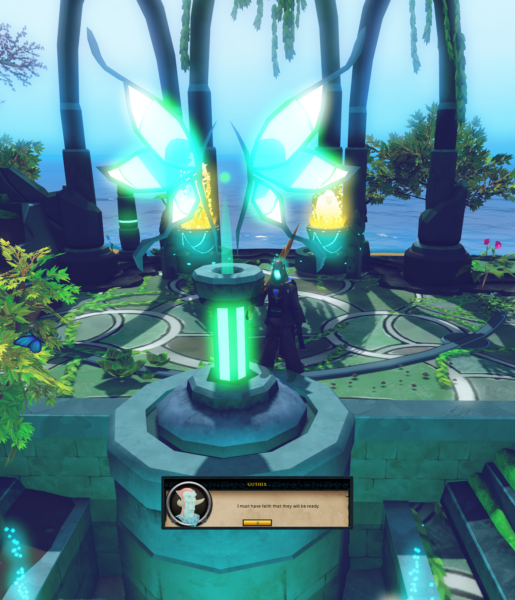 Although, in the case of Guthix… well, he just goes ahead and lore-bombs us about how we, the World Guardian, actually are supposed to work. Apparently we were HIS solution to the whole Elder God issue, and he even manipulated Sliske to kill him, which drove him to have at us, all for the sake of making us stronger. Which, as Endgame showed, is exactly what happened. I mean, Guthix’s death was originally a tragedy, but now, with all these explanations into the matter (some of which we even time-travel and ask Guthix himself about), it’s starting to feel more like a 600IQ move by the God of Balance himself. Mad respects, dude.

At some point in the quest, we wound up running into a Dragonkin clan, and chaos ensued. 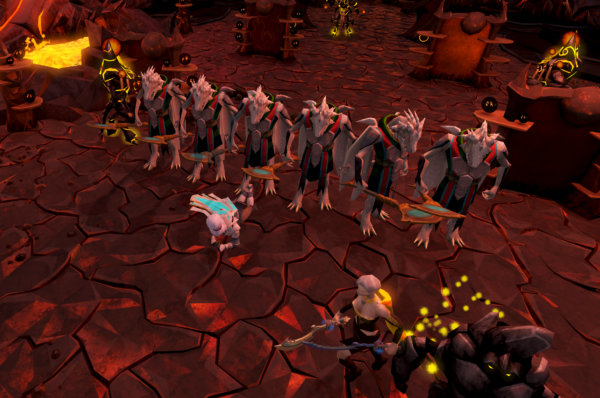 … who at one point terraformed the TzHaar city. 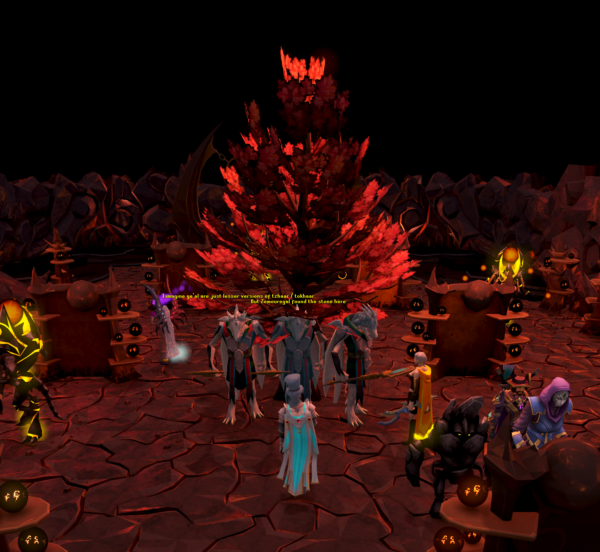 Eventually, Ariane has the great idea to… I kid you not… snort the Elder God mouthpieces’ dust to figure out where the Elder Halls are. And it works. Boom, out of nowhere, despite our prior failures and attempts to gather info, the situation is solved just like that. 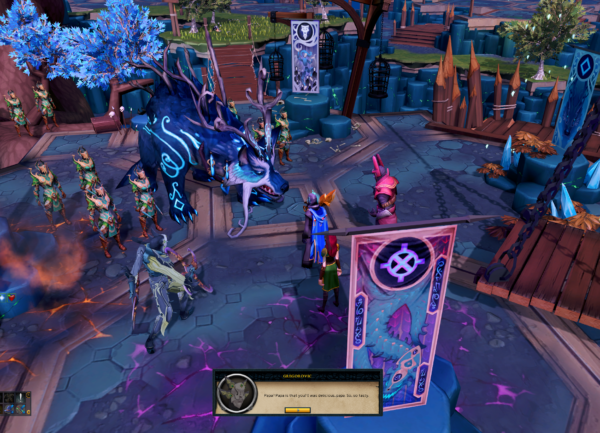 We head on down to the Heart of Gielinor and enter the Elder Halls and… oh hey, there they are! The Eggs! Mission Accomplished!

… heh. Right? You remember what I said about pacing and deus ex earlier? This could’ve been a three-quest series to find the Elder Halls, and we just got handed a golden ticket straight to them. What’s the big deal? 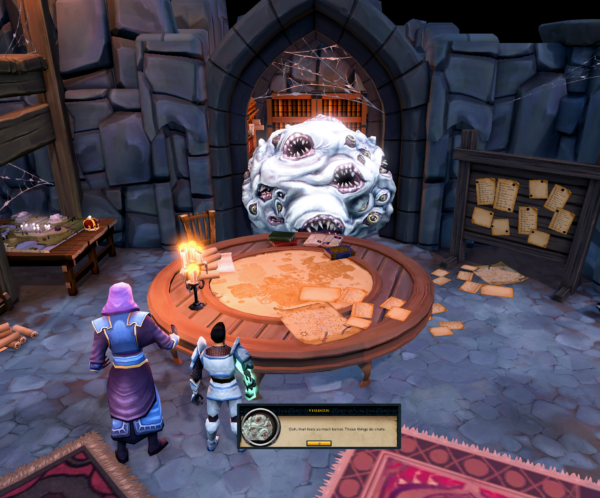 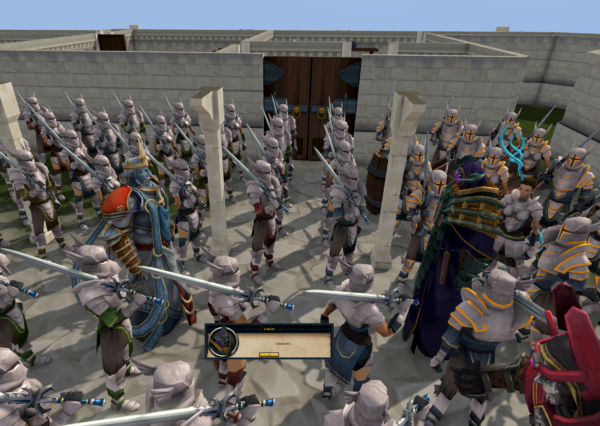 THAT was the quest! Surprise twist! Jagex are so GOOD at those! For example, Missing Presumed Death is all about the Gods. V’s Quest is all about Dragonkin. Zamorak’s Heist quest is (sorta) about Nomad. Kindred Spirits (barrows brothers quest) is all about Sliske.

And I LOVE that! I love these twists because that allows the quests to be advertised and hyped up without actually revealing the true plot points. It makes the quests so much more exciting because you have no idea what’s going to happen! I was absolutely mind-blown when I discovered that the Zarosians were going to steal Saradomin’s Crown. Which, you know, makes him a God and all. They’ve effectively just killed Saradomin, one of the most pivotal and well-known Gods of the whole freaking GAME!

But that’s just it. RuneScape’s been a progressing storyline even since the Sixth Age began. With Guthix’s death, the whole formula had changed from the Gods being omnipotent watchers of the game to becoming disposable characters of their own. Characters we respect and idolize. It allows us to get to know them, to fight along side them, to see their own struggles, and… most importantly… to see us SURPASS them.

And that right there is why we continue to play RuneScape. To surpass. To gain those levels, to beat our friends at bossing and PvP, to get all of the money gold coins of the universe and the banks, and to achieve the skills needed to take on new challenges as they come.

This is why this quest was so darn epic. It followed Jagex’s tried-and-true formula to the letter, it actually progressed the whole Elder Gods storyline as opposed to deviate from it like Kerapec’s series did, and it put us in a position where we are going to start both looking for our own solution, and pitting ourselves against the two key players: Seren and Zaros.

Because if we learned something from Saradomin’s fall from power, it’s that the Gods aren’t invincible, and it’s only a matter of time before we’re going to end up challenging Seren and Zaros themselves. 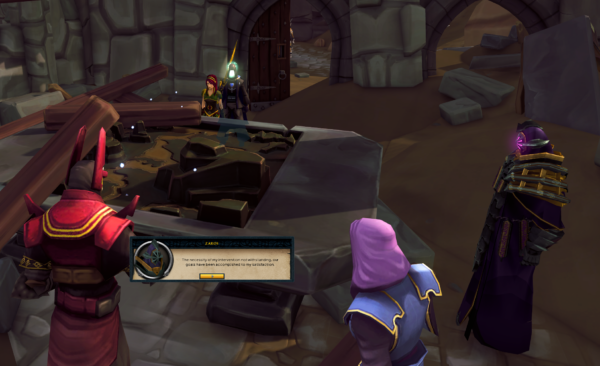 Question now is… who’s side are you on?