Alex’s Analysis – Keeping Up With Tradition

To my surprise and delight, the Christmas event of the year reused the beautifully developed content from the past year that was both epic and familiar, and with some extra awesome features, character design, and animations, a sequel was created. One that brought us back to the Land of Snow and reuniting us with our innocent little hyperactive friend as we went on a cheerful, fun-loving adventure.

I just wanna say, right out of the gate, that it’s brilliantly done. Just absolutely brilliantly done. One of my favorite holiday events ever, and I’ve been around since 2001. It’s a short and simple quest, even just a little tedious and annoyingly straightforward, but this is the kind of quest where that’s just perfectly fine. There’s no crazy puzzles, no bosses to fight, no items to gather or trekking to do; the entire thing happens all within surging distance. Which is good; you can’t surge in the land of snow. Which is also good, because it would break the immersion that the quest heavily relies on.

Yup. Immersion. That’s the word of the day here.

Take a moment to think about Christmas. Just, in general. Forget the malls and shopping and all the annoying done-to-death holiday songs on the radio, and just think about the simple stuff. What does Christmas involve? A tree, some snow, a lot of decorations, and just all this fabulous color in a heated home on a cold night. Unless you live in Texas, but we can’t please everyone.

This quest offers that. Just getting to the start location has us trekking (doesn’t count, quest hasn’t started yet) over the White Wolf mountain, which is this desolate, somewhat uninhabited chilly area. We don’t see that much in Runescape, so it feels a little foreign, even a little depressing. Because nobody likes being cold. Cold is a somewhat negative temperature. We gotta fight against it somehow.

It’s in these locations that we are presented with the quest itself. Postie Pete says that something’s gone wrong in the Land of Snow, which prompts us to venture into, as I’d say, the heart of the storm. And in there, we’re met with Posty who is this cold, mean, impatient sort of guy. You think everything’s going wrong and you’re stuck with this jerk of a character in the middle of a snowy blizzard. Not fun at all.

And then, you are given Violets letters. Just this cinematic of drawings that she’s done just gently reminding us that, in this cold and desolate wasteland, you actually had a wonderful time with her once. Either recently or long ago. And… you know, just the memories that it comes with, it kinda warms you right up. Its this intense transition of sad depressing times into happy joyful times with such a simple reminder.

I mean, just take a look at this. 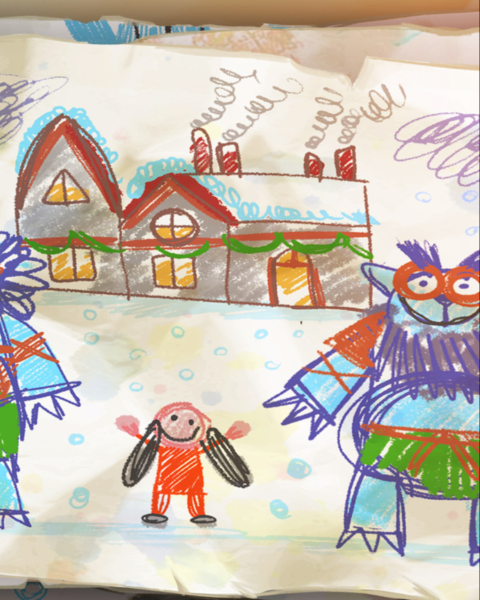 This is the product of inspiration. We were a hero to this kid, and we inspired her to render her good memories into artwork. It makes you forget she’s even an NPC.

Just like that, I wanted in. I wanted to see Violet again. See how she was doing. I just had to have another adventure with her. Not for the rewards, not for the quest points; but for the sake of the adventure itself. 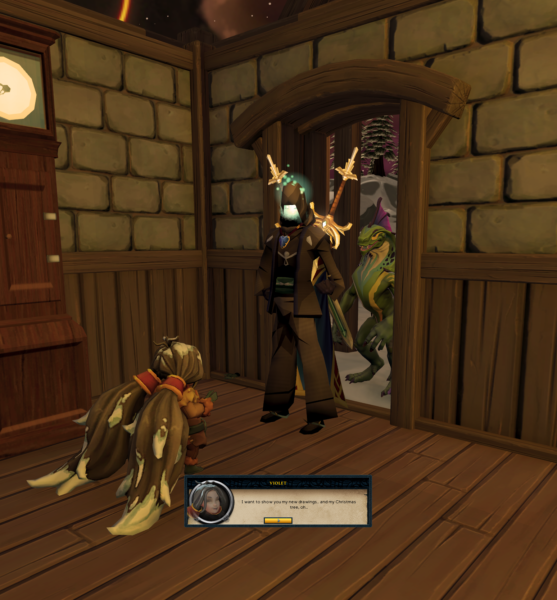 And come on, how could you say no to such a darling? First thing she does when you walk in the house is leap into your arms in the most adorable of animations. It was like just this blast of nostalgia. Like our characters, and by extension us, have actually properly bonded with her. And we may as well have she’s actually developed over our year of absence. She’s learned to read, tell stories, and, most importantly, draw!

… oh. Right, yeah, I brought my Ilujanka friend with me. That’s Keeta. He wanted to see what Gielinor holidays were all about, so he’s joining us for this adventure. Funny story; you’re not allowed to summon things in the Land of Snow, but nothing stops you from just taking them into the Land of Snow upon entering. So yay!

So, we started just kinda hanging out. Seeing what Violet’s been doing over the year. Character development, refamiliarization of her personality… again, beautiful and brilliant storytelling.

She showed us her tree. Or rather, a drawing of a tree. 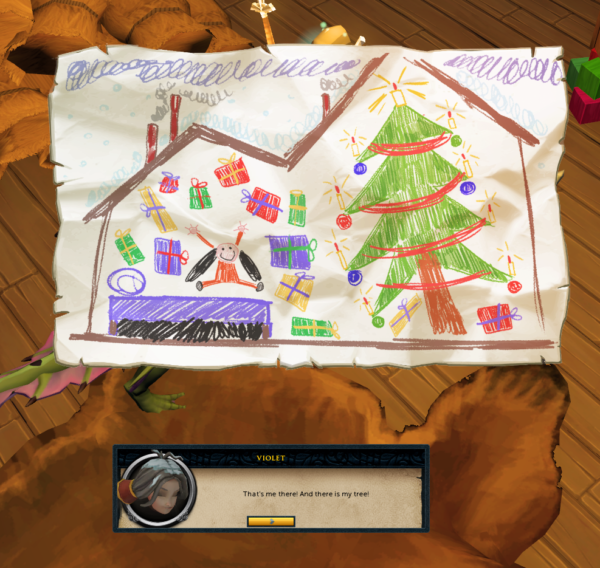 And, I’ll admit, our imaginations kinda took over, and we went ahead and gave it a few improvements. 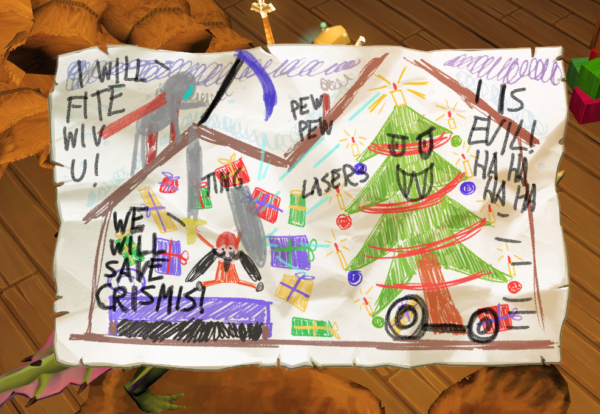 Trevor was not happy about the sort of things I was influencing her to do. At least I wasn’t teaching her to swear or anything. What kind of sick twisted moron would ever think of that?

… oh right, the quest. So stuff happened and, as it turned out, the real quest became searching for our old snow imp friend. Folks who have been playing for a while will know who we’re talking about; he appears practically every Christmas as a familiar envoy, and he’s got a ton of different names, so each player’s got a different one. Just a little added personal touch to the mix.

So we have ourselves some tea and go find him. 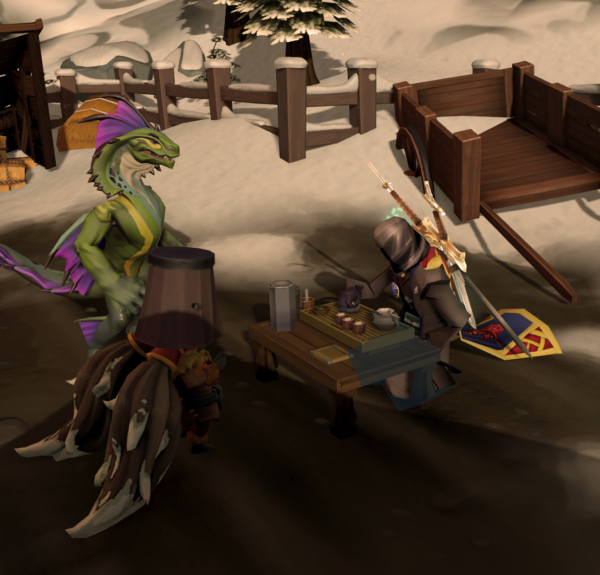 Bad news; he’s been stuck in a box for two weeks, and as a result… well, bad things happen. I’ll not spoil anything else because you either have already done the quest, or should really do it yourself.

But I’m gonna add this here as a bit of foreshadowing. 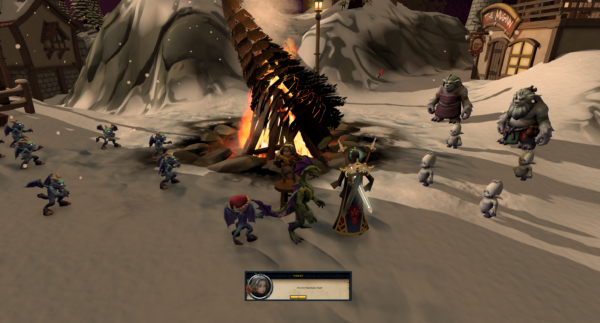 I mean, how devastating is this? A Christmas Tree… ON FIRE! Surrounded by people yelling at each other. Like, this is the epitome of a disaster. Right her, right now, we are spurred into action, and things get kicked into twelfth gear. Violet just flat out roars everybody into stunned silence, and we get things organized. What a hero, what a character. I couldn’t be more proud of her.

So from there, the quest actually happens, and… spoiler alert, we save Christmas!

Again, a very simple, straightforward quest that’s practically a cookie-cutter copy/paste from the usual formula, but just that little extra during the build-up phase to make it feel so much more familiar, traditional, and meaningful makes this event just so much more powerful. The best event they’ve done so far. Can’t wait for the third installment!

So, if you’re feeling bummed out that the year 2020 hasn’t been a good one, just play through the quest (in your head if you’ve already done it) and know that if a six and a half year old is able to fix things with little more than a positive attitude and a loud voice, then maybe there’s a good chance that things can be made alright. Sometimes, that’s just all it takes. Positive thinking, positive attitude, positive ambition. We needed this quest, not as characters, but as players. Just keep on smiling, and have a great holiday even if you have to fight for it. 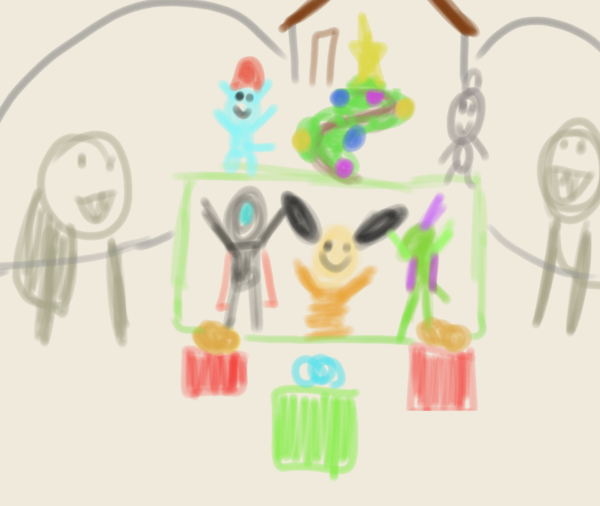