With the release of Runescape fantastic new Quest-Skill, Archaeology (admit it, the skill is one big quest; best skill ever), players have gone absolutely ballistic in their rush to regain their Max Capes and be among the first to reach the level of respectable prestige upon the leaderboards. With “le me” being the first to reach level 99, level 120, and 200 million exp (I mean, dude, what are you even trying to prove at this point?!), the skill has proven to be tedious, but nevertheless pretty quick, with a lot of interesting in-between perks to aid in the training.

For example, it provides us the ability to assemble collections with our gathered materials. We can assemble tetracompasses in hopes we get a good drop. We now have a new tool that, for a good while, has been the chief money-maker in Runescape at 100mil per (and it’s only a moderately rare drop at Big Game Hunter). Add the perks of getting a guild status to unlock powerups and exp boosters, a pseudo-daily pylon event, and lore up the wazoo highlighting some very interesting past events regarding the aviansie, iceyene, goblins, zarosians, and demons, Archaeology has been an incredible addition to the game. Complete with epic soundtrack, stunning visuals, detailed story…

…and, why not, the ability to freaking FLY! 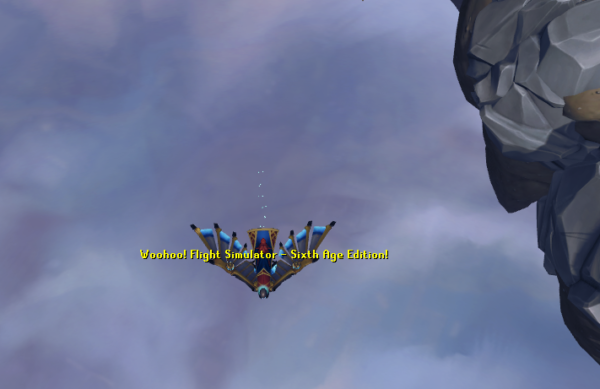 … no, I’m serious. Back then it was split into Light and Dark magic. They got combined later on when people were getting higher than level 20 because that’s as far as the spell-book went at the time. There was, like, two attack spells called “level-1 strike” and “level-2 strike”. That’s it! Everything else was buff yourself and weaken enemies and stuff. There was even a Fear spell that made NPCs flee combat. I miss that; it was great for both trolling people and saving low-level friends. How did it troll? Well, you make an NPC run from battle at a tick of health left after minutes of fighting, then you run in and finish it for the easy drops. … yeah, that was a thing people did. Drop steals. Had to be ready.

So, why don’t we take a walk down memory lane and I’ll relate to you guys the experience of all these skills coming out.

First off came the Crafting skill. It did sort of exist back in the day, and the only way to get to level 3, the highest possible level, was the completion of a certain quest. I forget which one it was, though. I think Goblin Diplomacy. Possibly.

What could you do with it? Absolutely nothing! It was, as one would say, a “dummy” skill. In fact, it disappeared for a while.

But then it reappeared, and with it came silver and clay and leather, and suddenly there was cow genocide as players mashed out cowhide. Seriously, that was THE way to train Crafting back then; blasting away cows, tanning their hides, and sewing it en-masse. Once you got into the Crafting Guild, the entire ball game changed. Suddenly you had access to ALL the gold and ALL the silver, and your own personal cow pen for all your sewing needs!

What good was gold? Why, the ever popular, ever desired, perhaps most valuable item in the game at the time: the diamond amulet of power! Seriously, if you weren’t toting one of those bad boys around your neck, you were a noob. … well, unless you were wearing a ruby amulet of strength. Those gave more max hit and were just as popular.

So, we enjoyed our lovely new skill. It was the first real “new” skill of Runescape.

Magic did come out just before that, and with it came teleportation and high-level alchemy, but it remained just as hard to train, if not harder with all the extra runes. And there was no runecrafting; you had to kill stuff for runes. Like, a moss giant will drop 1 or 2 law runes for you to teleport with, and they were among the highest level mobs in the game. And people desperately needed teleportation because, surprise surprise, Runescape didn’t have a run feature!

How bad was it? You could sell law runes in the market, one at a time, for 1000 coins each. Go to a bank, guaranteed someone there’s buying a law rune for 1k just to get somewhere. And that was a LOT back then. Sell 50 law runes, you can buy runite.

Prayer came out alongside magic, and also got revamped shortly after and became a thousand times more useful with the “Protect from Melee” prayer, which made you pretty much invulnerable when PVMing. Especially if you knew how to flash it.

So, life was a casual grind. All the quests were done and it was merely a matter of training skills. Times were simple for a while. Players were starting to get bored standing around and doing nothing. Fortunately, Jagex had a solution.

Yup, fishing came out, and that changed the name of the food game. Back then, cooking was revamped to include apple pie and chocolate cake as the best food in the game. Nothing came close to it. Until fishing came out.

Now players could stand around and get free food by clicking, over and over, on a spot on the map. Sometimes they get a thing. If you were free to play, the place to go was Karamja. No bank there; you had to run all the way back to… I think Draynor had a bank back then? If not, they actually had to run all the way to Falador’s East bank to deposit.

And then came members.

BOOM! Agility! Thieving! Herblaw (yes, it was called that)! Fletching! Four brand new, immensely broad skills all at once! You paid a monthly subscription, you had an entire new world to explore! Dozens of quests! New skills, new items, new areas! And sharks! It was a complete, literal game-changer!

As for the free-to-play players, they were kinda left in the dust. Pretty much no changes from then on in the game significantly affected them. We did get a new tutorial island later on instead of merely spawning in Lumbridge, but that really doesn’t count.

OK. Now, hold onto your shoes, because it gets nuts.

Runescape, as we all knew and loved it, turned into “Runescape Classic”, thanks to the appearance, beta-testing, and solid release of one dynamic and epic “Runescape 2”. And the new skill that changed the way combat worked forever.

… which I will talk about next time. Shane doesn’t like it when I type copious numbers of words. Until then,