RuneScape contains a rich, interconnected economy of different skills. With 27 skills – 28 after the release of Archaeology – the game is more complex than ever. Most skills are connected to many other skills. You can’t do Firemaking with the logs from Woodcutting, and you can’t do Smithing without the ore from Mining.

Recently I was thinking about Ironman players, and it came to my mind that many players probably don’t really know how interconnected the skills in RuneScape actually are. With the release of the Grand Exchange, it has become incredibly easy to buy resources in bulk. Add some bosses where making money is easier than gathering resources, and you find yourself in a game where many players train skills in isolation. They buy the prerequisites, train the skill, and sell the product. Ironman players don’t have the luxury of trade, so for them, understanding how skills work together is important.

I wanted to set myself the challenge to learn just how intertwined RuneScape’s skills are. I know some of the more obvious links, but there is probably a lot more that I haven’t really realized before. I set out to make a chart that for every pair of skills decided whether an item produced by skill A is used by skill B. It didn’t take long to find out that this would fairly quickly create a mess. There’s no doubt that Mining is needed for Smithing, but is Smithing needed for mining? Sure, with Smithing you can make a pickaxe to make your mining faster, but surely that doesn’t count as strongly as Mining providing all the ore! Combat skills posed another challenge. You can get logs, herbs, and what have you from PvM, but it doesn’t feel quite right to make combat skills take the place of a gathering skill.

In the end, I decided to split the dependencies in three gradations. In the table below, a “3” means that the skill produces items that are directly needed by the other skill. Woodcutting makes logs for Fletching, Fishing makes fish for Cooking, etc. “2” means that items are created, but it’s not the main purpose of the origin skill. Drops are a good example of this, but you can also think about all skills producing items for disassembly in Invention. Finally, there are the smallest dependencies, denoted by a “1”, that help make a skill better to train, but are not essential. Smithing making items such as pickaxes and hatchets, and Herblore providing potions are examples of this.

The following is the chart I ended up with (click the image for a full version): 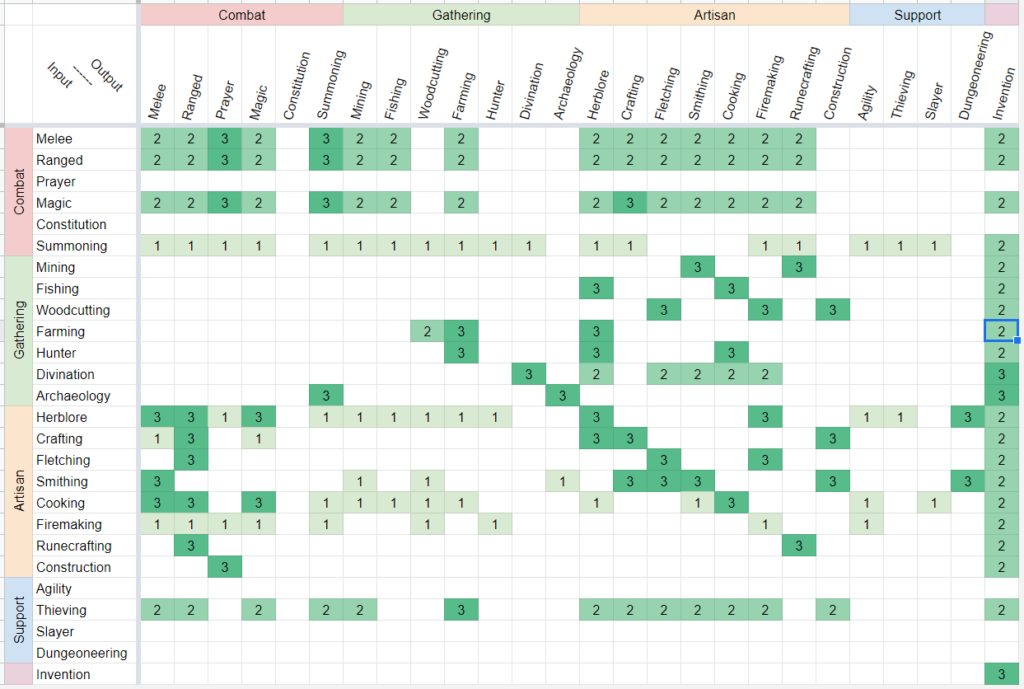 Before going into the details, consider how filled this table is! Each filled cells means that one skill is used in another. Note that in this table, I only accounted for items being used for one skill into another, so this doesn’t even include dependencies such as Prayer and Summoning making combat easier, Agility making just about everything easier, etc.

Combat skills are a great source for about everything. They feed into themselves, since the high-level armour and weapons (which are maybe not “essential” by definition, but let’s be honest… they kinda are) are dropped from PvM. However, they also have drops for nearly every other skill, which is why the money-making balance between skilling and combat is so off. This table shows that.

Once we move lower, we start seeing the real interesting parts. Gathering skills are generally dependencies for artisan skills, as we expect, though artisan skills can also depend on other artisan skills. Artisan skills in turn are often of one of two flavours: they either feed into combat skills quite heavily, or they provide smaller benefits across the board (Herblore potions, Firemaking incense sticks, etc.).

Two final interesting things are the fact that Thieving is right up there with combat providing a secondary source of items for skills. I made one exception here, which is Farming. Thieving is generally considered one of the best ways to obtain seeds, and I’d argue that Thieving is the de facto input for farming in that sense. Invention is the opposite of both combat and Thieving, is a true item sink, with almost every skill producing items that can be used for disassembly.

So what can we learn from this? I think the analysis is a bit too rudimentary too make real, hard conclusions. To gain a better understanding, we’d also have to look at exclusive flows. For example: the new Farming and Herblore updates added a lot of items that are needed for Herblore, and are only obtainable through Farming. No combat drops here. That is very different than herbs, which can definitely be gotten through other means as well.

The point I’d really like to focus on, is stressing how much these skill connections exist, but also how much they matter. Ever since the Farming & Herblore update came out, I have been training the skills in tandem. Farming my own requirements for Herblore makes the skills much more interesting to play. Instead of farming herbs just for money or experience, I am farming them so I need them. And instead of throwing millions of GP into Herblore supplies, I need to be a bit more scrappy and do what I can with just the stuff I have. It actually gives the skills purpose beyond the endless grind.

This is what I hope we’ll see more in the future. The observant viewers will already have noticed that I added in Archaeology among the other skills. From the get-go, it will integrate with Invention and Summoning. This should address the problem that Divination had when it was released: it felt isolated, independent from other skills.

As much as I hope that Jagex will continue to tie in the skills together, I also invite you to train skills together. If you’re an Ironman, you most certainly already do, but even for us non-Ironmen: there is no harm in paying the iron-price every now and then, working for the resources we need, instead of throwing money at it.