IFB, short for Insane Final Boss, is perhaps the most difficult achievement in RuneScape. It combines an immense numbers of hours of grinding, skill at efficient and high-level bossing, and good luck. To put in perspective how difficult of a feat IFB is, we know that there were around 2,000 players who at some point have owned the Trimmed Completionist Cape BEFORE Castle Wars was removed as a requirement, there are around 15,000 players who have owned the Completionist cape at some point, over 20,000 players currently have max total level (including 120 slayer/invention), and 620 people have achieved what some feel is the most difficult feat in the game – 5.4B (max) experience. Current players who have at some point owned the IFB title? Under 250 total. While this number seems miniscule on its own, it’s important to note a significant percentage of those 250 no longer have IFB due to new bosses coming out, so the real number is likely far lower. While there are a few extremely niche rare titles that compete with it or are rarer such as Gamebreaker, the Wikian, and Gold Warden (very few of whom are IFB ironically), it could be reasonably argued IFB is the crowning achievement of RuneScape 3.

Currently, players must unlock 50 boss pets to achieve the title, with some pets averaging well over a hundred hours to acquire. Additionally, players must have a minimum of 100 kill count in each boss, including hard mode – Elite Dungeons group mode counts, but this is the only place where that is the case. Just the bare minimum for kill count at each of the bosses is already hundreds of hours. Bosses like Vorago for example are just a few kills per hour with a pet rate of 1/5000. While the addition of a threshold to the Vitalis pet certainly made IFB less RNG dependent, even a single threshold at Vorago takes a minimum of around 250 hours – this assumes you’re never failing kills and doesn’t account for waiting for teams to form which is tons of time. Furthermore, the supplies for IFB incur a huge number of hours as well. Most players will get their Max cape prior to attempting for IFB to unlock the boss portal, which is a big task on its own. The many thousands of untradeable overloads and replenishment potions add further to the length of this achievement.

Due to its prestige, and my love for bossing, I decided this year to make IFB one of my primary goals. As I write this article, I’m AFKing Commander Zilyana – the last of the “fully AFKable” bosses on my IFB list. Currently, I’m at 24/50 pets. This seems like I’ve got a ton left – which is true – but I’ve got the “most difficult” bosses out of the way. I’ve done all of the pets for Araxxor, Vorago (including hardmode), Solak, Telos, Raids, and Nex: Angel of Death. At any point, I could get six additional pets for the Barrows: Rise of the Six brothers since they’re functionally just buyable after 100 RotS KC.

Lately, I’ve been trying to approach IFB as small bite size pieces. I’m focusing now on getting my 100 kills for each of the GWD2 challenge modes, and just have twin furies to go. Tasks like this are incredibly tedious, and there were many points during the Vindicta CM grind – that boss is just awful – where I wanted to give up on the whole project. One strategy I’ve been taking is to use reaper assignments to incentivize me to do such bosses. The fact Custom Trimmed Masterwork doesn’t degrade during reaper assignments is a small boon to for these more annoying assignments, as I can use max gear without incurring a cost – in the grand scheme of things, this is such a miniscule cost that it’s not meaningful, but small little boosts to my will to fight on have been the key for me to stay on target. For me, and I think this is the case for many pursuing IFB, “easier” bosses are actually far more challenging to stay motivated to continue. I absolutely love content like Telos or Solak and would be doing those all day if I wasn’t trying for IFB. A much simpler, more accessible boss like Kalphite King or Queen Black Dragon, on the other hand, are absolutely brutal to force myself to do.

As of today, here’s my current boss KC. 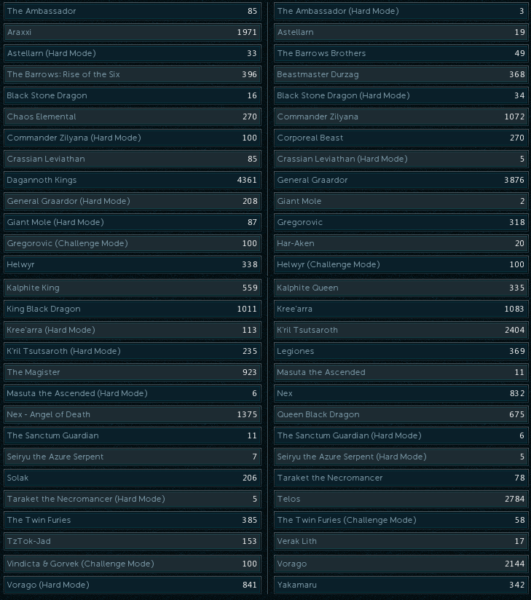 As you can see, the most difficult part of my journey remaining is the 3 Elite Dungeons (EDs). Many players find EDs so tedious that even a few of those with IFB – those who put in literally thousands of hours into their title – aren’t even bothering to go back for them, or at least haven’t prioritized it. While the Vitalis threshold made IFB much easier – it used to be said owning a Vitalis was 95% of IFB – the addition of the EDs added a ton of time to the requirement and made it much more difficult to acquire.

The biggest positive from this goal has been the increased opportunity to PvM with people outside my normal circle. Since I became extremely serious about PvM – around the end of 2016 – I started only bossing with people who were among the most elite players in the game. I already had BiS everything with nearly infinite cash to spare, so my only incentive to play was to become as good at high level combat as I possibly could be. IFB opens the door to more casual play – bosses like Dagannoth Kings or Gregorovic don’t require the same level of skill or intensity so I can play with all kinds of friends. If anyone is interested in helping me out with any of the bosses I’ve got left, or if you want to start an IFB journey on your own, feel free to message me in game or on the RSBANDB Discord!