In an earlier article, I spoke about Dungeons & Dragons, and why you should get started on it. There are many reasons why the game is so much fun to play. As opposed to computer games, D&D allows you to go out of the bounds of the rules and the framework of the game. When that happens, you just make something up and roll with it. That’s what we call rule zero of D&D: the rule of cool. If it’s cool, it goes. It means that if you think your character should use that chandelier to swing through the room to land on the shoulder of a big ogre so you can stab it in the eye, then by all means, go for it.

Going out of the boundaries isn’t limited to just the rules though. In D&D, the players make the story. There is a call to adventure, and whatever follows is up to the players. Do the players choose to follow your main quest, or are they more interested in helping that old woman they happen to stumble upon.

As players grow more powerful, they can have a bigger influence on the world. Players in D&D at maximum level have basically ascended to be a demigod, and can influence the politics or geography of a world completely. At that point, the tabletop group is no longer just storytelling, they are world building.

The Dungeons & Dragons books come with several world settings. Forgotten Realms and Waterdeep are the two famous ones, and actually have several novels set into them. If you start a D&D campaign, you are likely to start in one of these settings. If you want to take things a step further though, you could start making your own world.

To me, one of the most fun things of being the game master of a D&D campaign is that I get to decide how the world looks, what is going. I’ve spent many hours coming up with the world’s history, building maps, thinking about politics, and more. I think world building is inherently a fun activity, and it is a great reason to start learning more about history, politics, geography, currency, and what not. World building is often linked to writing a novel, or maybe making a movie or game as a stretch. Those are great reasons to start thinking about your own world, but you don’t have to limit yourself to that. Coming back to D&D, I have found that starting to play a tabletop RPG with friends makes me much more motivated to work on that world. Starting from session one, you get to share that world. You are playing with people who are motivated to figure out the secrets you are not telling them. At times, they want to figure out the secrets that even you have not figured out yet. This makes you dive into new parts of your world. 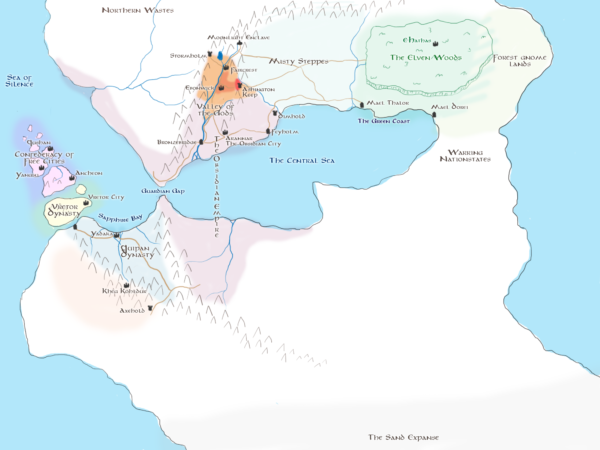 World building is something you can do anywhere, anytime. If I’m bored on the train or taking a shower, I sometimes think of new parts of my world, come up with new ideas, fill in some gaps. Slowly but surely, my folder of notes is growing.

If you want to get started, let me start with some quick tips:

Even if you’re not into world building, consider exploring an existing one instead. There is a lot of information on existing worlds, and even as Dungeon Master of a campaign you can explore that world alongside your players.

I want to end this article with a quick paragraph that introduces the world that my D&D players are currently playing in. There is a lot more going on in the background, but I don’t want to spoil the secrets just yet.

As long as is known, dwarves and elves have wandered the lands. The dwarves dwelled in the mountains, with their seat of power in the underground city of Kheg Kohldur, where the majestic forges burn day and night. In the mythical forests, the elves would reign. Anybody unpure of heart trying to reach the ivory towers of the elven city E’hathas would be forever lost.

The peace would not last, as dragons arrived on the world flying through the Void, carrying on their backs gnomes, halflings, humans, and dragonborn. Where they landed, the dragons forged the city of Alannar, the Obsidian City, as a new home for these races. Dwarves and elves sent representatives to speak to these new people, and a peaceful co-existence was agreed upon.

The chromatic dragons wanted more, and with the metallic dragons retreated, they coerced the humans to expand into the lands of the ancient races. After the dwarves and elves spoke to Bahamut, the Platinum Dragon, and reminded him of the pact, the metallic dragons swiftly ended the war, and banished each and every dragon, including themselves.

Many centuries passed, as prosperity flowered. This changed abruptly when the now powerful Obsidian Empire loses one of its main keeps. Within years, they find themselves being overrun by an army of unknown people, who have travelled through a portal from another world. Meanwhile, there are signs that the war is hiding a much more important problem. A problem that could mean the end of the world.

This article is filed under Science Fiction / Fantasy. You can follow any responses to this entry through the RSS 2.0 feed. You can discuss this article on our forums.
Navigation