NOTE: There may be spoilers. Advise you do the quest before reading, as this is not a guide, but an analysis. I mean, it’s in the title, after all. 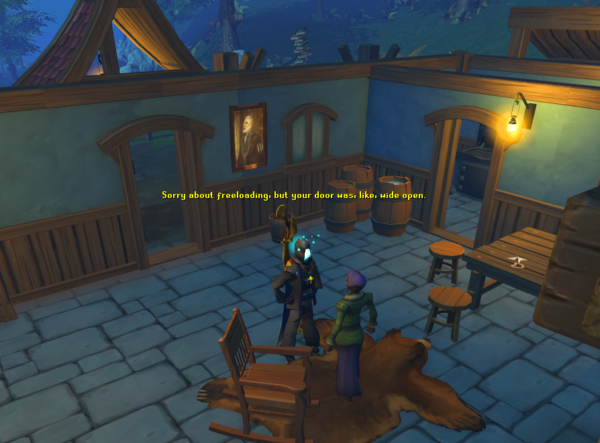 Right off the bat in the weekly update, and even in the future features article detailing it, the developers of this particular quest told us they wanted to try something new. A quest that bordered on a “search engine” where upon entering key words, you progress through the quest. You get the words from snippets of the story as it continues, starting at the beginning, sometimes skipping ahead, but always and ultimately managing an order out of the whole ordeal.

Have you ever read I, Robot? You know the part where the dead doctor uses a hologram with a limited set of messages to play back when the detective asks the right thing, based on “what they’ve seen here”?

That is the entire quest.

The plot is simple. You find a dead person next to the Needle, which beckons you to discover what happened with the first key word: Megan. What follows is a series of testimonies from the three key characters of the quest and their sides of the story. Of course, there are other minor roles here and there… 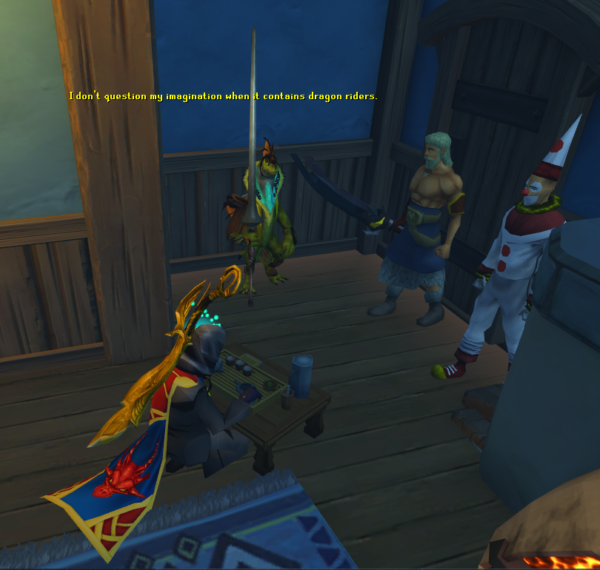 The entire quest is a dialog. Or journals, if you will, of each of the three characters and their own personal take on the situation. During these parts of the testimonies, the quest is set up so that they mention or conclude with a sort of cliffhanger, and you ask aloud, “what did you mean by that”? And that’s when you ask the Needle. You input that weird, sometimes out-of-place word, added in there with little to no context prior (eg: the sudden mention of Sloom), and suddenly the context appears. The world changes just a bit around you, new testimony appears, and the story progresses.

Eventually, you hit the last testimony in the list, and the story takes a turn so dynamic that you change characters for a whole new recounting. Sometimes you don’t get all the entries and end up somehow skipping ahead. Sometimes the words are so obscure you miss whole sections of the story.

Fortunately, you can replay the quest to get all the words! Not sure if it does anything, but… yeah, that’s a thing you can do.

Is it fun? Not really. There are no mini-games, no real challenges, no danger. You walk around, investigating things, inputting words, making a LOT of guesses, and just listening to the story. There are no bosses, or skilling challenges, or mind-boggling puzzles to solve.

But this quest isn’t supposed to be a fun game. It’s supposed to be an involving story, and it does that incredibly well. It’s not exactly a game this time, but more an interactive movie. Add the awesome voice acting to the mix (glad they’re doing that again), and it’s really just an experience you kind of sit back and enjoy. A super casual quest.

And if you think that that’s no good, then another angle you can look at this is that it’s an introductory quest to one of the 12 Elder Artifacts. One that you will be using for future quests. And it’s been established with the Stone of Jas that the Elder Artifacts are perhaps the most powerful items in Runescape, if not its very universe. Something that intense and complicated needs a nice involving tutorial, wouldn’t you say?

I liked this quest. Very much. It felt like a sort of break from the usual daily grind. Just a whole new atmosphere to get involved in. Like going to a new restaurant that just opened up, but it takes a while for the food to arrive, so you just sit back and take in the surroundings for a while before the payoff. You enjoy it, but you probably won’t go back to eat there again unless the improve the service time. Which is something that will happen as they get more accustomed to the recipes.

I guess my only complaint about this quest is of the Needle itself. I was expecting this thin sliver of an artifact, like a great big spear or a straight, spiky strand that flows through the world. Instead… 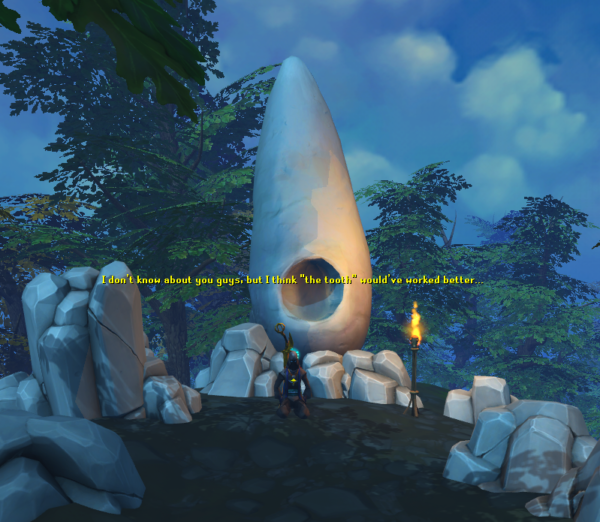 … meh. The Elder Gods just like to play with rocks. I won’t judge.