Elite Dungeon 2 – Dragons are Always Worth the Wait

After a several week delay in an effort to deliver a high quality product, Elite Dungeon 2 – The Dragonkin Laboratory finally came out on August 13, 2018. The dungeon requires the completion of the first elite dungeon, Temple of Aminishi. While Temple of Aminishi largely delivered on the form that was promised—big, lots of mobs, several bosses, scaled difficulty and a checkpoint based classic dungeon raid feel, the content wasn’t executed at the level it could have been. The difficulty rested in-between what most players feel confident with but well below the high bar set by end game bosses such as Solak and Telos, the gold per hour left a lot to be desired, and it felt like it missed its intended audience. The Dragonkin Laboratory, on the other hand, seems to do everything right. The entire dungeon exists on a single map, making it a bit less confusing to initially navigate. The setting is gorgeous, highlighting the type of lighting and detail possible with NXT and the theme couldn’t be more fun and more Runescape – Dragons!

Elite dungeon 2 will be immediately familiar to anyone who has completed the first dungeon. There is a chest with teleport and auto-loot functions and a series of barriers blockaded by various mobs that must be killed to continue going. While there are some divergent paths available to those looking to tackle the mini-bosses, which are similar in style to Aminishi’s high HP, few mechanics, little to no danger encounters that reward dungeoneering tokens, the dungeon is set up in a relatively linear fashion.

As far as gear goes, T90 accuracy is definitely a must have for these dungeons, as for several of the mobs and some of the encounters you will not achieve 100% accuracy even with an aura. While all three styles have their advantages, I would recommend Magic for its versatility, access to vulnerability, and access to a variety of good Area of Effect abilities. Ranged is also certainly viable due to the incredible power mechanical chinchompas have for clearing out large swathes of minions efficiently. An ideal team would probably consist of two people on magic for vulnerability and a ranger for speeding up minions, but more experimentation is needed. For my setup, I elected to perk a set of Anima Core of Seren armor just for the elite dungeons. I was using tectonic, but the degrade rate of the T90 version is massive to the point of feeling cost-prohibitive, and I wanted some specialized perks such as crackling 3 and dragon slayer (+7% damage to dragons) on the same gizmo. For those curious, the recipe for that combination is 4 explosive and 1 dragonfire component, with a success rate that feels to be around 1/25. If you’ve got the budget to make it, I would highly recommend doing so as it works on all three bosses and is useful on the vast majority of mobs. The 7% increased damage is more than double the improvement between a T90 and T92 weapon, which costs around a billion gold by comparison. Here is a screenshot of my inventory and setup: 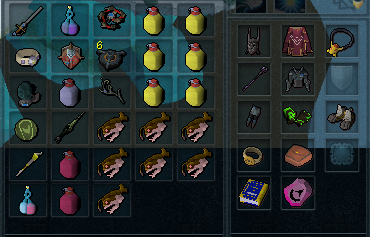 The combination of weapon poison and cinderbanes gives a big boost to damage here, and the dominion mines are highly useful for the third boss-the Black Stone Dragon-which I’ll discuss in a bit. I used the god book only during the actual boss fights, as turning it on for minion clearing seemed a bit wasteful—a cheaper book with an AoE special like Guthix or Zamorak might have a lot of potential here, so I might try that as a switch in the future. Given the checkpoint nature of elite dungeons, I would highly recommend a steel titan or another damage boosting familiar as even early on you won’t need much food and can easily bank when needed. Don’t forget to bring an super anti-fire potion or a combination potion that includes it, or you will be roasted alive very quickly!

Along with Shane and Tanis, I discussed the specific mechanics of each of the bosses in detail on RSBANDBUpdate! 684 – Direct Hit: The Dragonkin Lab, but will do so again here. The dungeon has three main bosses: Astellarn, the first modified white dragon, Verak Lith, a significantly stronger version of the King Black Dragon, and the Black Stone Dragon, created by Dactyl and having some relation to the mysterious god Xau-Tak.

Astellarn is potentially the most difficult to grasp mechanically at first, as there are some timing and movement based mechanics, but has extremely low KO potential for anyone near maxed combat/gear. Mechanics include a falling miasma-like rain that doesn’t constant type-less damage in one of the four sections making up the room-can be avoided by simply stepping over into another quadrant, a pulsar that does rapid 2-3ks which should be destroyed immediately, a timer that explodes into another type-less damage dealing black hole, and a neutron star players must lure over the black hole to turn it white, allowing players to stand in it to do the maximum amount of DPS. With three players in close to max stats, a sun rotation and then an onslaught on the white hole, which should be place between two quadrants so players can easily avoided the type-less miasma, is usually sufficient to kill it in one cycle.

Verak Lith is arguably the easiest fight of the three. He has four sets of special mechanics, all of which are easy to deal with. The first is a set of spikes that emerge from the ground after players get a message about the earth trembling. These do around 3k melee damage when stood on and must be taken down as soon as possible in order to make the boss vulnerable to damage again. The second involves the three sets of eggs on the ground-poison, ice, and shock. A green target will spawn on the ground for each player with a limited time to stand in it. Afterwards, players will be told they’ve gotten poison/ice/shock building inside them, and must go click on either of the two sets of eggs that are not the type of damage they’ve received, or they’ll be hit for 9k damage. If you’d like to, this mechanic can be largely ignored by the use of resonance or reflect to block/halve the damage, but it seems generally easier to just clear the damage. The other two mechanics include a dive bombing dragon that will deposit fire in a line (easy to avoid) and a set of flames that bursts into flaming tornados which you should get away from immediately, as they’re probably the most dangerous part of the fight if standing in them when they start to explode.

The Black Stone Dragon is also a fairly straightforward encounter. He has more regular special attacks that mirror the Hydrix Dragon specials, which are easy to dodge and should be avoided. At 520k hp, he teleports to the middle of the arena and becomes invulnerable to damage. Four hands emerge with 80k hp that send out slow but powerful magic attacks and the crawling hands from Seiryu. Vulnerability and dominion mines are hugely helpful in taking these down, as they have high defense and splashing will often happen. After the hands are cleared the next mechanic to worry about is a set of blue flames that will close in from the outside in a spiral formation, they’re very easy to dodge but extremely deadly, so be sure to play close attention. Finally, at 260k hp the dragon will take off to the air and once again be invulnerable to attack and will set large parts of the arena on fire-again, just avoid the flames. For more experienced teams, it is possible to time a berserk (all three probably need to be using melee, so either camping melee or a full melee swap is needed) and can kill the boss during the animation, preventing it from flying and saving around 2 minutes on the kill time. This strategy is fairly dangerous but worth learning if your team is confident in its ability to pump out a large amount of dps—berserk, titan specials, and a shatter with 10 stacks is usually enough.

Overall I’m super happy with the Dragonkin Lab’s style and mechanics. The lore was a lot of fun and the loot is much more worthwhile—the combination of invention components, energies, and codex’s leads to it being right around 15m per hour, making it highly competitive and even better than God Wars Dungeon 2 and normal mode Nex, other bosses in its range of difficulty.