Earlier this month, we bode farewell to the Runescape Classic servers.

This was an announcement made a few months ago. Because they simply couldn’t support it anymore, they pulled the plug on the servers so they could do a little summer cleaning and make things fair again.

Somebody at Jagex offered to help us carry out our final farewells. I sent them an email and asked in the forum if they would help me recreate one last Cannon Party in the only remaining Runescape world where I could actually do it: 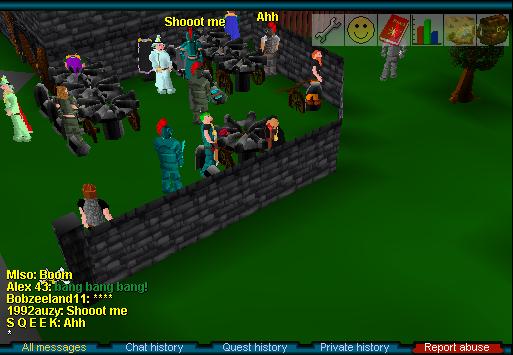 They didn’t respond. The idea of more than four cannons on the screen at once blew somebody’s brains out at their desk there, and I was sent a restraining order in the mail. Sorry, folks, but I no longer live in Canada.

But that didn’t stop me. I had enough RSC currency built up to buy a small piece of a cannon. One that, funnily enough, was exactly what I needed for a farewell homage.

So I went ahead to where everybody else was and decided to join in with them. Hand in hand. Celebrating our final day; nay, minutes of a game the majority of us grew up with. One that sustained our childhoods, taught us ambition and respect, and- 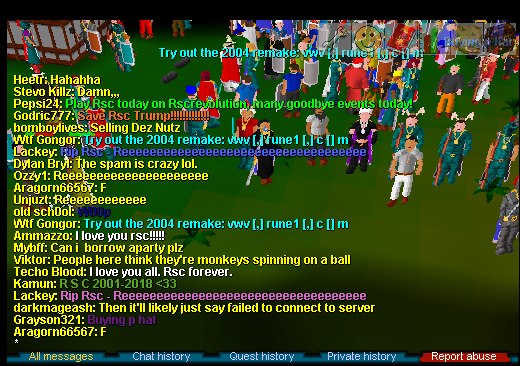 … never really grew up from. Alright, this was too noisy. I left. 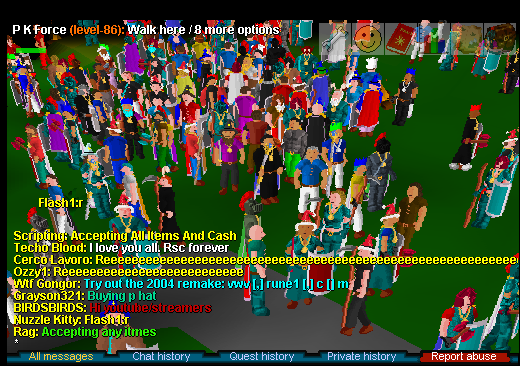 I left Draynor Village. Lots of memories there. I remember the countless times I teleported there using my glory amulet. The many times I had to get resources exchanged. The times I… um… stood in the bank… and looked at my stuff…

Nostalgia is a weird thing. 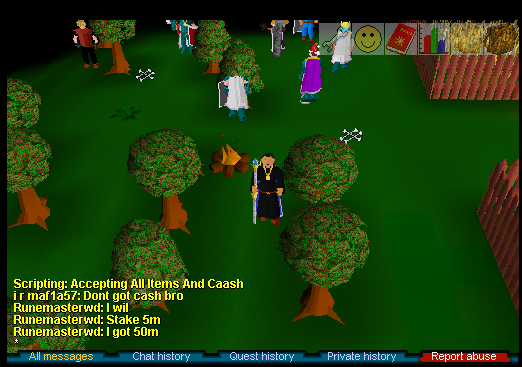 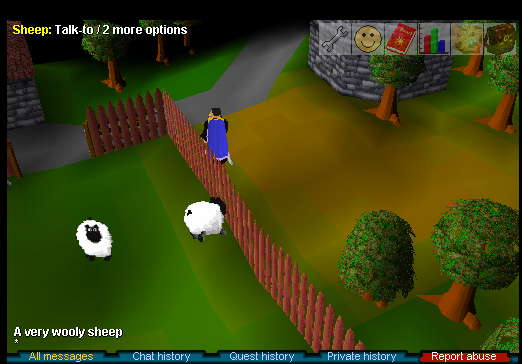 I went to Lumbridge. Where it all began. The spawn was covered in noobs all getting killed via ridiculously large dueling gambits because why the heck not. I instead went to the castle, where it wasn’t quite as loud. 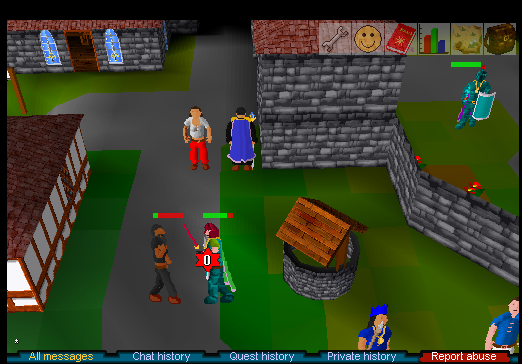 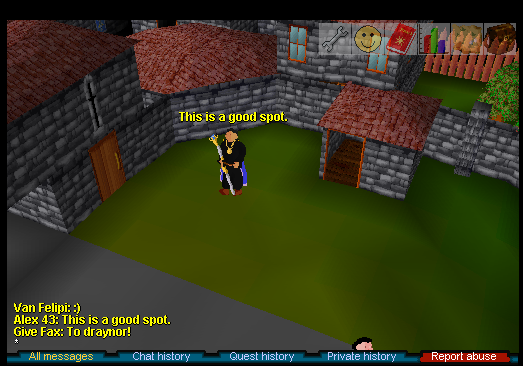 Yeah, you go to Draynor… 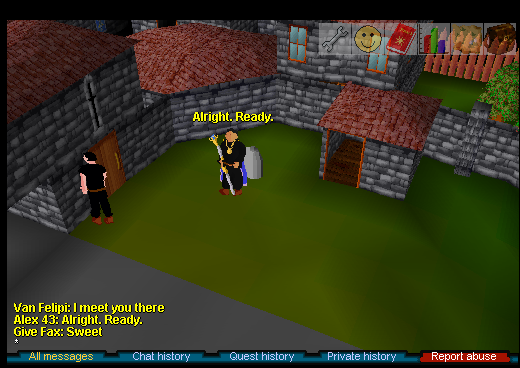 I was set. This was it. The end of my Runescape Classic account.

… naturally, looking death in the face, one can’t help but philosophize about, in my opinion, utter nonsense. There’s a bit of poetry behind it, and when it comes out of my mouth, I often think it’s the most epic thing in existence because I don’t really care anymore. 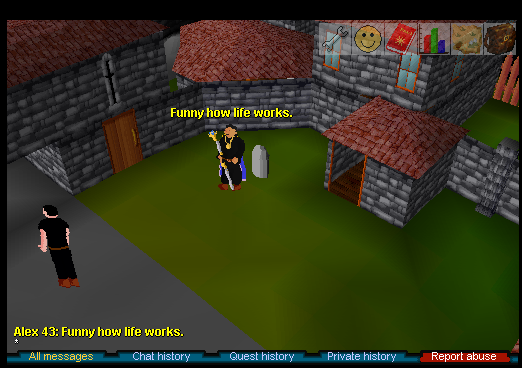 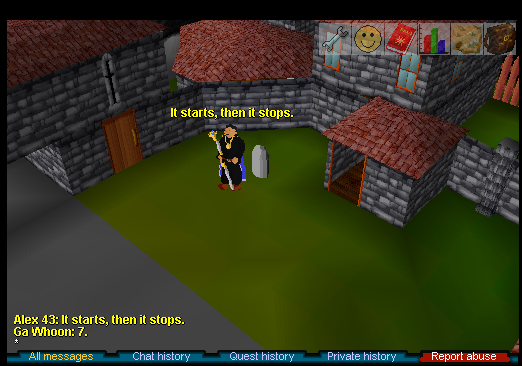 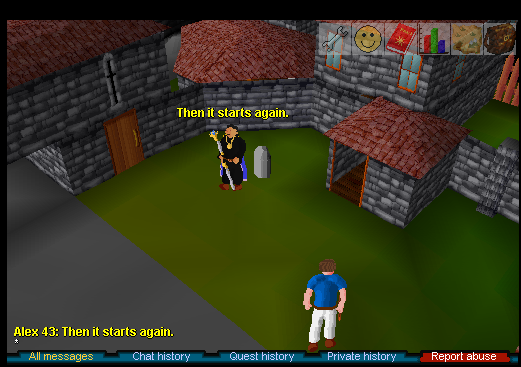 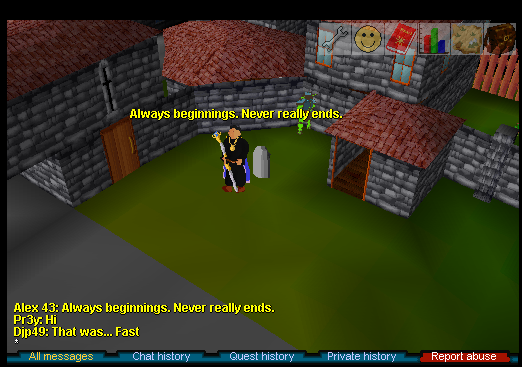 Makes one think. That one being me. And I don’t think for long.

It was about here where Hans jumped me, yelled at me for trespassing and littering the courtyard, and threw me out. I tried to argue back, saying that the world literally had 5 minutes to live as indicated by the magenta text that kept on popping up, but he said, “Yeah, yeah, that’s what everybody’s sayin’.”

Gee, I wonder why everyone’s saying that…

Well, he threw me in a mud puddle, so I had to change clothes (I’m not burying myself in the ground all muddy now). I returned to Draynor Bank and, fortunately, I found an old dusty suit from ages ago that still seemed to fit me. Quite nicely, too.

So I went around and tried again. 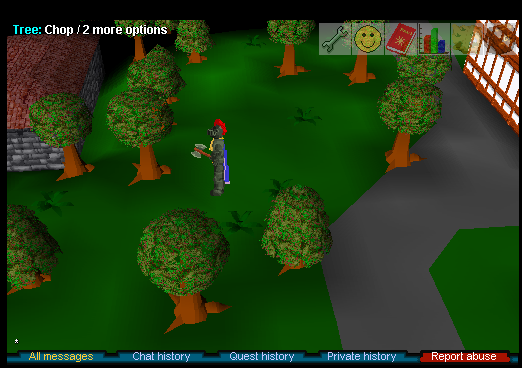 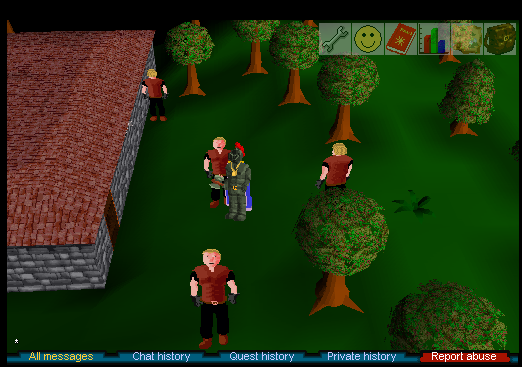 Oh yeah, there was a quest here. You had to save Prince Ali by dressing him as a woman and locking the original one in a closet that didn’t actually exist. I’ve never been able to figure out where she’s been stashed all these years…

Or if she’s still alive for that matter. For all we know, she’s now the most well protected pile of bones in Runescape. 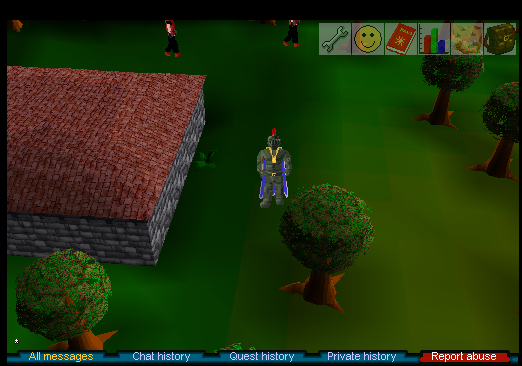 I didn’t have long, so I chose a spot just in the midst of the forest west of Lumbridge. Nice spot, well away from the public. 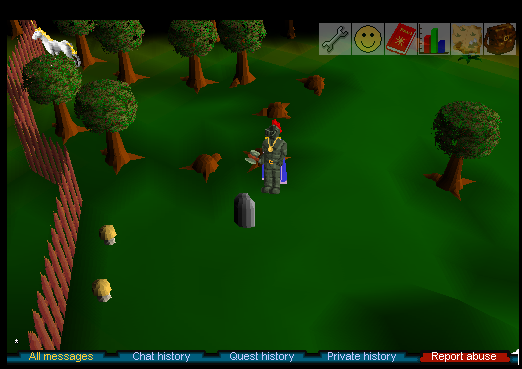 I chose my final resting place. I set up my base. I contemplated my humble beginnings. 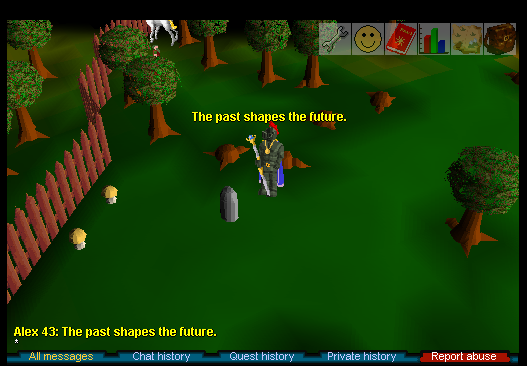 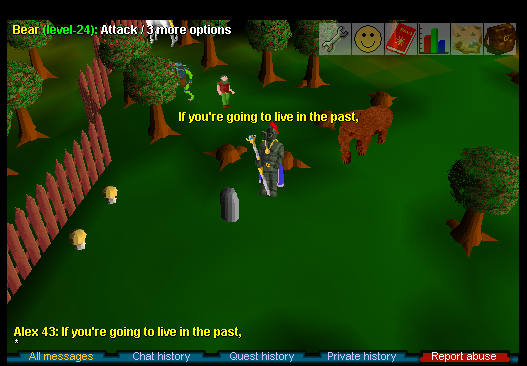 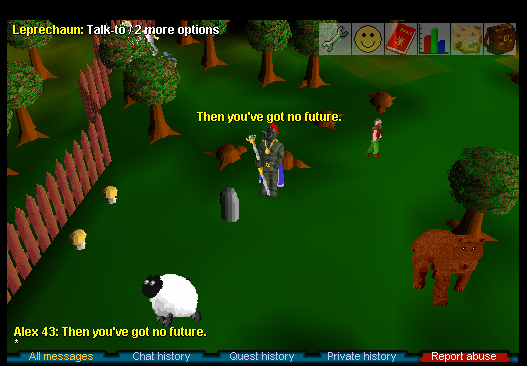 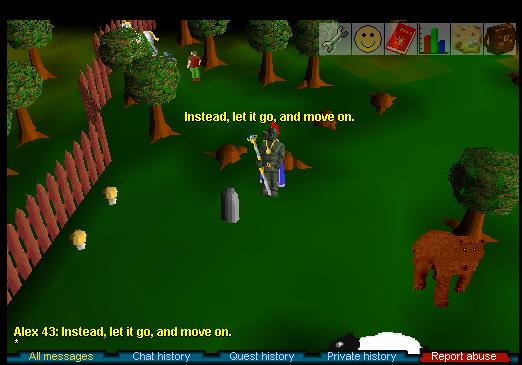 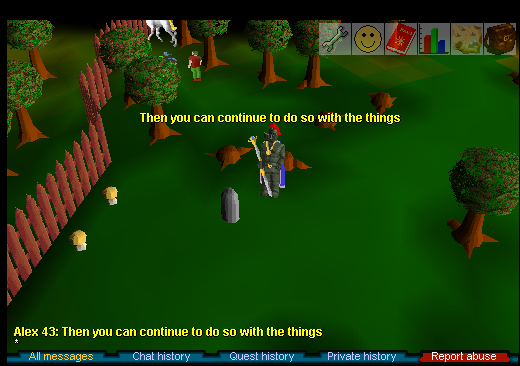 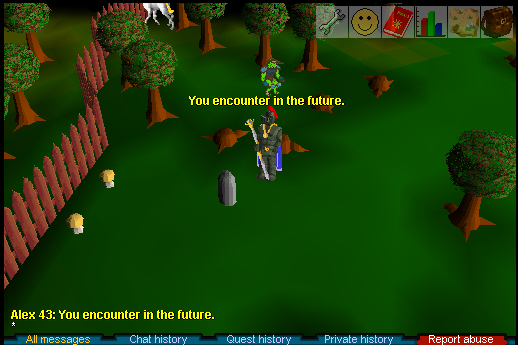 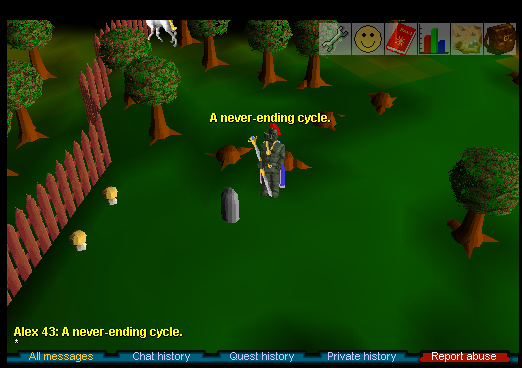 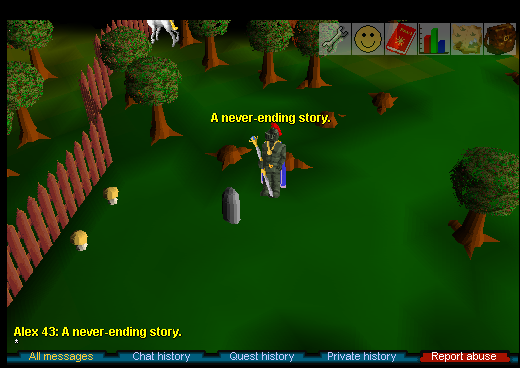 The clock struck zero. … for about half an hour. I continued on about the beauties of polygonal assembly and how the simplicity of life formed the building blocks of-… well, a lot of stuff that made me feel cool at the time. I won’t bore you with that.

Eventually, the lag started to really hit, and I knew at long last, it was time. Last words.

So I finished it off with a line I think you’ve all heard once before. 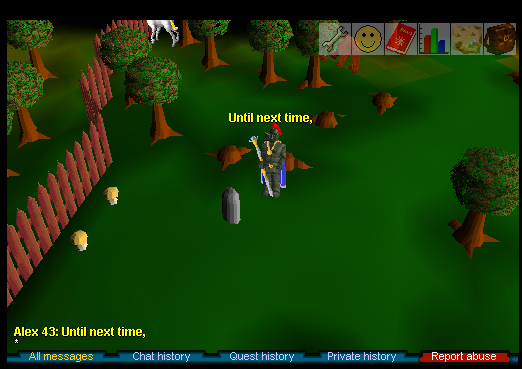 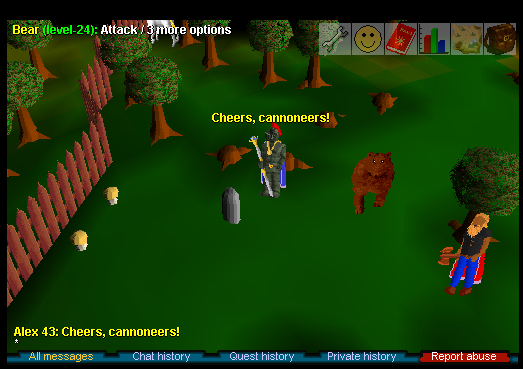 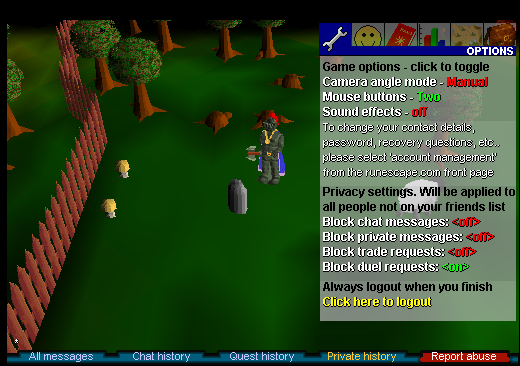 (I know what you’re thinking. Yes. The bear merged with the noob and evolved into a sheep. That’s how sheep were made in Runescape Classic. They died when you sheered them.)

And that was it. There went a familiar piece of my childhood. No more Runescape Classic. No more cannon parties.

… unless I start working for them, to which case I’ll probably make a cosmetic version of the old-school cannon that sets up for an hour at a time and do it with mod powerz. We’ll see what the future holds.