In the first of Runescape’s new answer to hardcore Dungeoneering; the Temple of Aminishi Elite dungeon, there is a-… actually, hold on. Let’s chat about that a bit first.

NOTE: Spoilers ahead regarding the Temple of Aminishi. I highly recommend you play it for yourself (story mode at least) before reading on.

So when I heard “elite dungeons” and saw that they were going to become another method for training Dungeoneering, I became a bit skeptical at first. Was this going to be another set of randomly generated dungeons that have players circumnavigating an entire maze of repeated assets and resources to find a boss at the end? Was it basically going to be a more “difficult” or “prestige” mode for Dungeoneering, separate to Daemonheim because… well, it’s been around for a while, so it’s gotten kind of stale.

I was curious, so I went in to find out. Upon hearing there’s a “story” mode meant for solo players to just take in the experience, how could I refuse? Sounded like a quest to me! 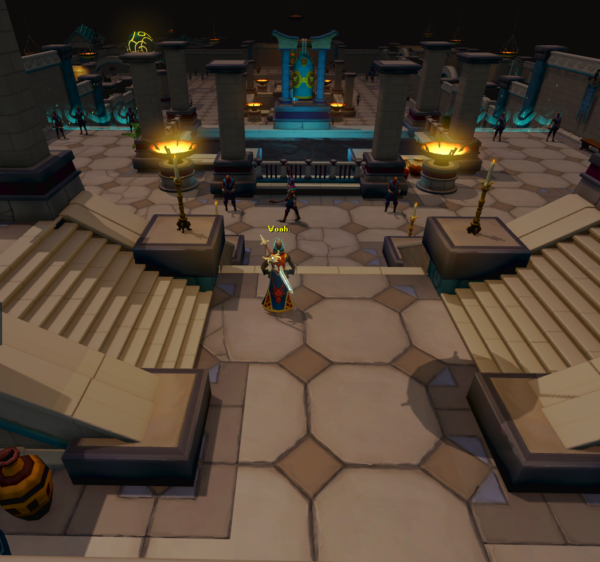 I was not at all expecting what I saw.

Vast rooms, sections separated by a meager light barrier that went down upon killing enemies. No random generation; the layout was always the same throughout – refined and completely explorable. I had to find which way to go, but it wasn’t me just checking different rooms; I was following legitimate branching paths that actually made sense structure-wise.

It was very immersive. We were actually doing grand battle in a great enormous setting rather than being crammed in tiny rooms. So many maneuverability options! I was having an absolute blast just slowly working my way through the temple. 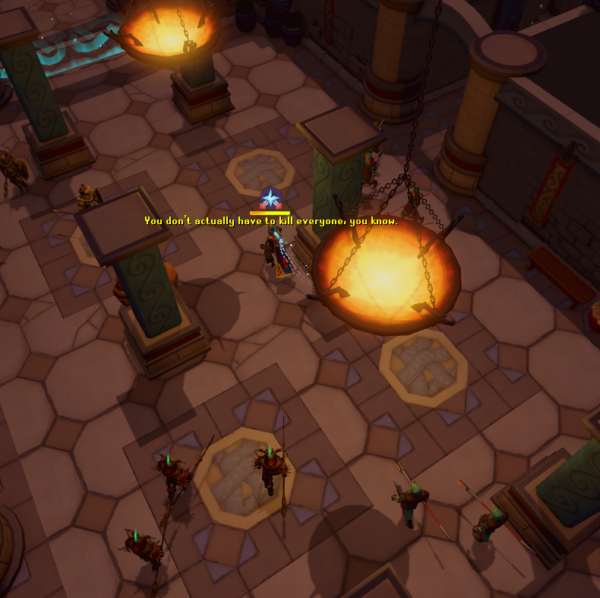 Anyways, fast forward through this, you eventually get to the final encounter and the final boss. 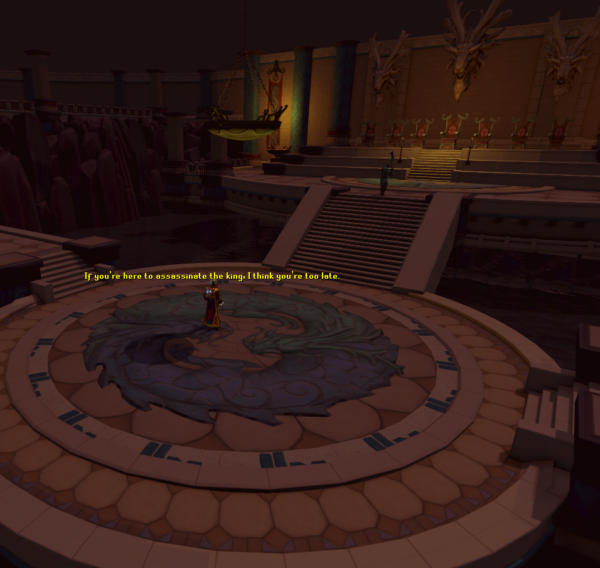 No, not that guy. 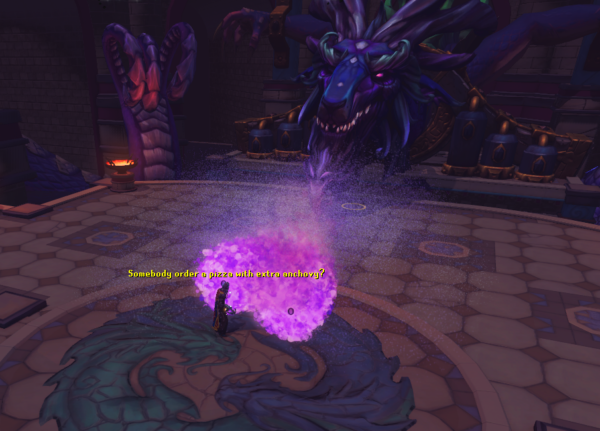 Now, as I was going through the temple, I’m reading the journal pages I find and listening to what everybody was saying. The Temple of Aminishi is for people trying to find peace and tranquility enough to… pretty much become dragons. How awesome is that?

But as I get through it, things are starting to get weird. I’m seeing Eastern Skull pirates, Menaphos mercs, just… general nere-do-wells hanging out in the temple catacombs. I’m thinking; what’s going on? And more importantly, is Seiryu alright? Because he’s pretty much the God here, and from what I heard from lore sources regarding him, there is no way he’d stand for this.

But at the end of the tunnel, there he is. And plastered upon his big, beautiful face is an attack option.

I… did not want to attack.

Please remember I went in this completely blind. I didn’t read any walkthroughs or really drive myself into the surrounding lore and fan theories. I was here to see what the dungeon had for me.

Now I’m wondering; OK, is this really how it’s going to be? Has Seiryu seriously gone crazy and I need to end him? No way! … but, here it is, and this conveniently large platform is pretty ideal for a final fight, so…

Against my better judgement, I attacked. Or rather, he attacked me. He was aggressive.

Right off the bat I’m facing off against something that somewhat resembled the Queen Black Dragon in mechanics, so it wasn’t unfamiliar territory. At first, I thought I was doing alright.

Then I checked his health. 3.8 million.

The previous boss encounter had 375,000 health. Seiryu had literally 10x that amount.

No way that can be right.

Part of me is thinking; wait, is this a bug? Pretty darn big bug to let into the game, folks at Jagex. But then I started thinking; wait, maybe there’s a way to deal colossal damage. This was not going to be a traditional boss fight. I had to keep my eyes open.

So I focused. I watched for the attacks, dodged wherever bad things were happening, kept my health up (considerably hard, all things considered), and just kept on dealing damage. All the while I watched Seiryu. Waited for him to do some sort of big attack. Maybe I shoot him in the mouth. Maybe he exposes some kind of gem core. Maybe I even transcend on him and fight him in the spirit realm.

I also listened. Listened for maybe an audio cue. Maybe the music would suddenly go upbeat. I was really enjoying it. All the while, it was a sort of traditional half eastern, half tropical mix. Kind of the music you’d play if you actually were touring the world and checking out these large temples of old. … and fighting stuff in them.

But then, all of the sudden, out of nowhere…

Then this song plays.

Now here’s where things took a serious, wham-filled turn. We had only fairly recently gotten the final quest in the pirates series where (MORE SPOILERS, Y’ALL!) we actually come face to fa- HAND of the God of Horror, Xau-Tak. We cork him up and think; yeah, no problem, we’re rid of that. It’s gonna be a while before we see him again-

Nope, he’s back. He’s here. He’s the puppeteer behind Seiryu’s mind. And he’s freakin’ MAD! All of this just came all at once, mid-battle, when my focus was already refined to a point trying to discern a weak spot in Seiryu because, let’s face it, he’s a really tough boss to solo.

EVERYTHING changed. The whole story-line. The whole plot. The actual final boss. Even the screen color suddenly changed, washing out the normal purple hue with a monochromatic cyan! And the music, if you even want to call it that at this point. Every single one of my senses were smashed across the face with a frying pan all at once.

I panicked. I legitimately panicked. This was the first time Runescape made me actually panic in a very long time (not a lot of stuff is scary now since the gravestone update came out). And it wasn’t in fear of losing my stuff. This was pure psychological horror.

I froze. I frantically clicked away from Xau-Tak. Then I frantically clicked at the hand. Attack? Do something! Chase it off? But it had no attack options. Its ooze suddenly appeared, and I thought; AAH! KILL IT ALL! I attacked it all, killed every one. I was even so afraid to let the ooze touch me that I kept stunning it and striking from a distance. It was an attack directly from the monster itself!

Then… it vanished, and the battle reset.

And suddenly I was surprised all over again. That wasn’t it? I missed it! I missed something!

The boss stunned me! The boss actually stunned the real life me and saved itself a round!

In fact, it took me two more whole rounds of this before finally realizing what I had to do; jump on Seiryu’s neck and ravage the crystals pinning him down before the black matter could “epic heal” it. Once I got that down, the rest was cake, and I was relieved to see that I was right, and that I didn’t have to go killing a dragon after all.

So Seiryu and I bro-fisted and I returned to the Max Guild. Sweating. What a wild ride. An epic dungeon crawl, with a more an epic finish. There is no way I would’ve had that experience if I had prepared for it.

So. What the fudge, Alex 43? That wasn’t even music that was playing! How could I have possibly enjoyed it?

You’re absolutely right. It wasn’t really music. It’s not something you listen to while you’re studying, or at a rock convert, or dancing to in a club. You don’t just play this song in an elevator unless you want everybody inside scared for their lives. That’s not what this particular piece of music is for.

In fact, it was not SUPPOSED to be music!

It was supposed to be part of the story itself. The events that were happening around me, wrestling me away from my control and delivering an entire new set of circumstances.

That song made an EXPERIENCE.

It’s one thing to just see an experience. But to take it in with multiple difference senses all at once… how to describe…

OK. If you will, imagine a jump-scare without the scream or loud sound.

It’s just a flashing image. Startling at most. In fact, probably not even. If the image is complicated enough, the brain would actually take a moment to render and figure out what it is, ruining the surprise altogether. It’s just biology.

But the sound jostles it. The mind only has to recognize the concept of “loud” from quiet to realize that something’s suddenly happening. Adrenaline rushes, focus is directed, and when the focus is directed to something scary, there is extra energy involved and the rendering happens instantly. BOOM! The shock is magnified several times over.

A double-whammy. That’s why jump-scares are so potent sometimes.

Now back to Seiryu. It didn’t need a loud sound to heighten my focus. It had the idea that I was fighting the hardest fight in the dungeon after having gone through two other strangely difficult bosses, putting me on immediate guard. Coupled with the fact I was actually fighting Seiryu, whom I was anticipating I would be rescuing due to the lore buildup made me hesitant to actually go for the kill. Plus the oddity of Seiryu’s health being super-high, making me think I had to watch for a strange moment.

All that already did that for me. Heightened my senses. When that state of focus was achieved, the game not only had the capability to shock via visual, but it still even had another shot at an audio jump.

That’s what that song is for in that moment. Not a jump-scare- in fact, better than a jump-scare. A fantastic stunning moment, right in the heat of a difficult final boss.

That is why I love that music so much. For that one first battle, that one first encounter, that song did exactly the job it was meant to do, and it did it perfectly. If you missed that moment, you will not like this song because it’s just too weird by itself, taking out of its context. But if this song caught you in that moment of surprise and confusion, it is, as of the time I’m writing this, the best song in the game.