Alright, now that I have that out of my system, this month I get the opportunity to talk about the most recent installment in the Quest Journal! The “finale” of the Rabid Jack series of Pirate quests, “Pieces of Hate.” Of course, the following article and discussion will contain spoilers for the quest and, by extension, for the whole of the Rabid Jack series. With that said, let’s get right into the action.

The quest begins when the player clicks on their player-owned house portal and is suddenly visited by Postie Pete with a message from our old buddy Bill Teach. Bill informs us that he’s been investigating some disappearances of innocent sea-dwellers that seems to trace back to the Customs Office. As such, he finds himself locked up in the Rock Island Prison and hopes to be joined there. In order to join Bill, the player must go to the Customs Office in Rimmington and confess guilt to one of a myriad of heinous acts before being swiftly shipped off to Rock Island. It’s easy to miss the humour in this segment of the quest but one of my favorite Easter eggs was the additional dialogue options for admitting guilt to some sort of “crime.” Below are listed the funnier screens of options for your enjoyment!

Once on Rock Island, we are welcomed by a familiar scenario with a fresh lick of paint. The island is looks quite nice now and the puzzles it presents are classically Runescape in their flavor (i.e., use random thing on another random thing to determine if it will do something). 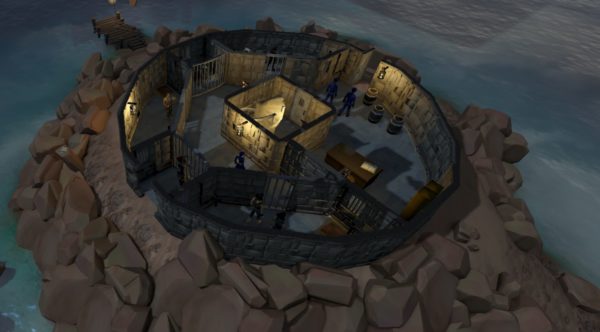 First, the guards need to be distracted and driven out of the prison. To do so, a “hidden hook” is retrieved from a pirate one cell over and used to tear some bedcloth which can then be fashioned with the hook into a fishing hook. Once a fish is caught outside, it can be used to attract a seagull (Count Ludwig Koppenploppen) whose cheeky dialogue fits nicely. To finish the job, that fish is then tossed in the prison through the player’s door and the resulting chase of the fish by our seagull friend rids the building of the guards. The door can now be unlocked using the sharpened hook as a lockpick and then the barrels pushed in front of the front door to prevent the guards from re-entering. Bill is then to be freed next but once his door is unlocked, a rat steals the hook, beginning a mini rat-hunt. More items from the prison are then used in order to construct a baited trap that is then set in front of a hole in the wall in Bill’s cell in order to catch the rat. However, instead of merely taking the hook from the relatively powerless rat, the player must instead interrogate and persuade the rat, named Wilson, to help in the mission. Agreeing, the other prisoners are released.

Once everyone is out of their cells, the door to the stairs is to be unlocked, but a ward has been placed over the door and only with the passcode from Jimmy the Parrot can the mission be take up to the first floor. After unlocking the door, examining behind a poster in the stairwell leads the player to find that keys to the first floor have been left in one of the beds found there. Once up, we see that a Crassian guard is patrolling this floor and must be distracted if we are to ascend any further. To distract the Crassian, a diversion is made using a pineapple, slime, and our rate friend to distract the customs officer in the bunks in order to swipe the keys previously learned about in order to open a room with strange Crassian eggs upon which the rum is then used to start a fire, drawing the Crassian away. Going up to the second level then reveals a cutscene involving Mi-Gor and a “MYSTERIOUS FIGURE” discussing their evil plots to take Mos Le’Harmless. Just as the player learns for sure that the Customs Office and Rabid Jack are definitely in cahoots to drum up evil, Mi-Gor spots the player spying on them and the whole party must then quickly dive off the pier to safety. Washing up on Karamja, the player finds that Bill and Madame Shih are still with them and together they decide that they should go quickly to Mos Le’Harmless to tell the others and prepare a resistance.

Once in the basement of the bar on Mos Le’Harmless, the group concurs that in order to find Rabid Jack and hit him at home, the zombie head collected during “A Clockwork Syringe” would be the best source for insider information. However, they’re not willing to talk without some encouragement, and after another interrogation, it is decided that in order for the head to reveal Jack’s hiding place, they need a companion to accompany them in addition to watching the sunrise on a westward-facing beach while “drowning in culture”. 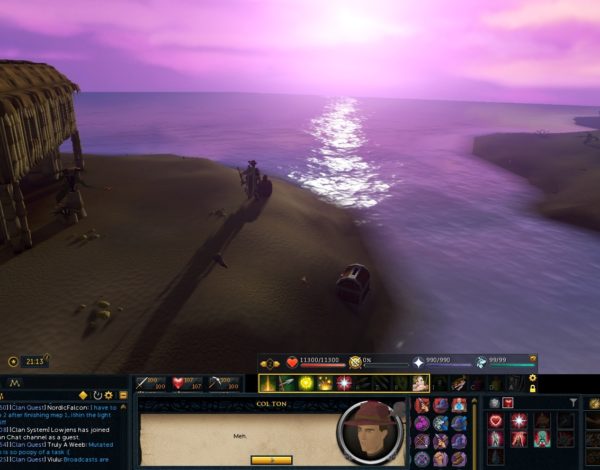 To find a pet, the player first goes to Gertrude whose children then direct the player to the sawmill. At the sawmill, however, is our old pal Wilson waiting for us in place of a cat. This seems satisfactory, though, and Wilson is then crafted a little collar to make the whole ordeal more official. The second condition can then be fulfilled by going to the Karamja lodestone and following the western beach to the south until the head tells you to stop. Here the head will ask for a few gnome cocktails before being satisfied enough to reveal the secret that Rabid Jack hides out at a place called Kraken Tooth Island. Madame Shih then offers to take the player swiftly there, yet the alleged location yields nothing but ocean. It is only then when Rabid Jack appears fully on the ship, taking with him Madame Shih before teleporting away and leaving the player to deal with Zogoth, a similar monster and fight when compared with Agaroth from Ashdale. 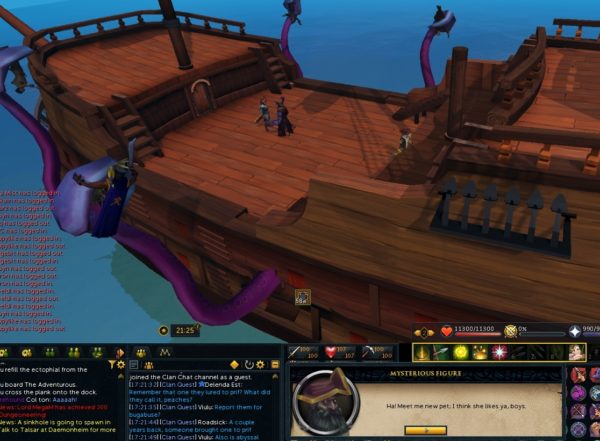 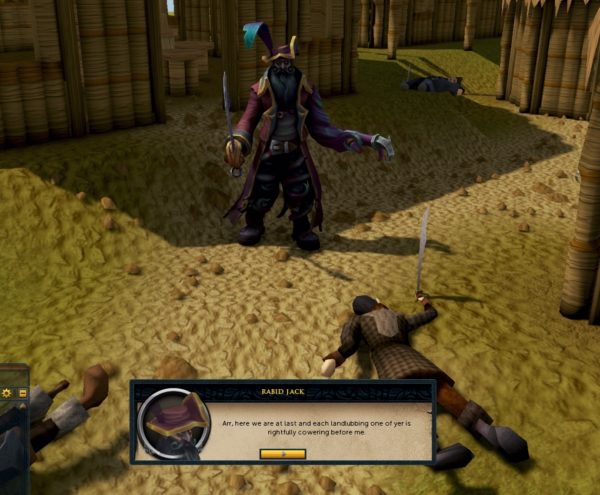 When the fight is won, the player will return to Mos Le’ Harmless only to find it overrun by Jack’s minions. To reclaim the island, two waves of a beach-defense must take place in order to repel the oncoming forces. Even once this is finished, the player then discovers that this whole invasion was merely a diversion in order to get to the distillery on Braindeath Island, a means by which Jack might distribute the serum which would subjugate all who consume it. A long series of back-and-forth actions are then needed around the distillery to destroy Jack’s current operations and to learn of his true location from Mi-Gor. Once the dungeon entrance has been bombed and the distillery fully infiltrated, the player finally can proceed to chase Rabid Jack for a final fight. 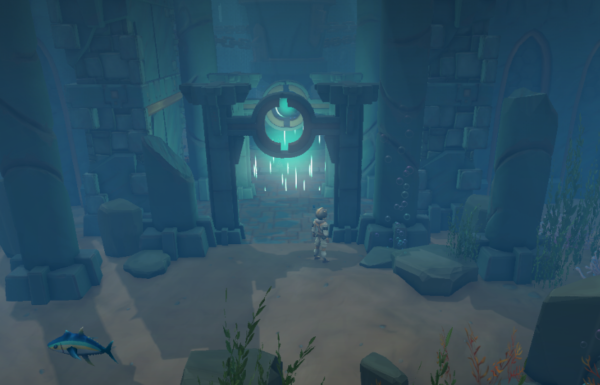 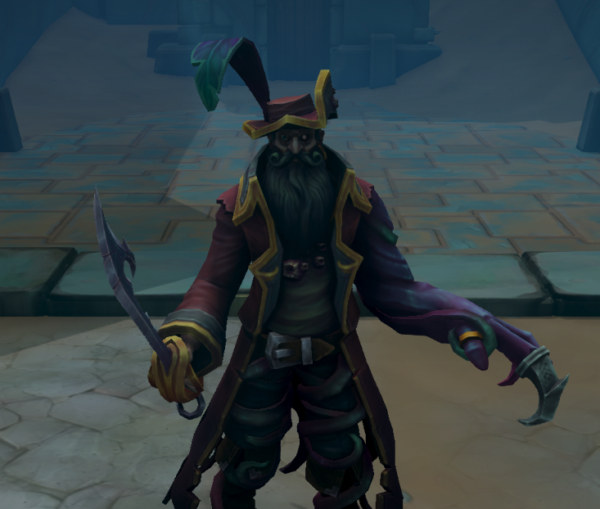 To find Jack, the player must go underwater to an ancient dragonkin temple called Ulthven Kreath. Once the temple is entered, a fight ensues wherein the player must maintain their sanity by consistently drinking of the barrels scattered around the temple whilst also fighting Rabid Jack to the point where the player might loosen the chains in the corners of the chamber in order to finally push Rabid Jack into the portal placed in the center of the room. Once the fight is finished, Rabid Jack escapes death, seemingly, by willingly falling into the portal which is then summarily shut by the boulder above which has been steadily loosened to fall. The player may then speak with Madame Shih who truly seems to believe that Jack’s role in the player’s journey is not yet played out, as he very well may return. Quest complete! 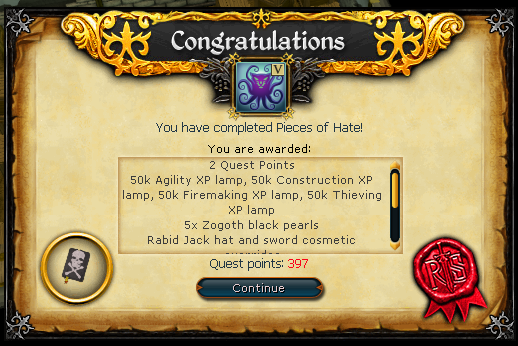 Now I realize that this quest description was long (as it was a lengthier quest), but I’ll try and keep the synopsis here brief. For one, the humour was great in this quests. There were several great examine options, funny bits of dialogue if you are willing to venture from the straight path of questing efficiency, witty new names for a now leg-less 50% Luke, and meme references galore. It was never too much, either, so I’d say they nailed it on the silliness meter for me.

With regards to the actual quest mechanics, I thought it was good overall. Up until the distillery sequence (which I felt was unnecessarily long for very little payoff), everything worked well. In particular, I enjoyed the Mos Le’Harmless defense minigame. I’m not usually the best at those kinds of games and although it made me anxious, it worked pretty smoothly and was satisfying to defeat. The final fight was also well done as well as I found the hallucinations, spinning of the camera, and other sanity-related effects to be very immersive and (although sometimes frustrating) a nice change of pace. Can I just also say that the underground temple and surrounding environment is gorgeous? Man, I think they knocked that one out of the park.

Lastly, questions we might be left with. For one, what the heck was with the shadowy kitten that showed up all over the quest to offer the player vague and grim existential expressions and proverbs? The examine text of the kitten reads, “Do you think you can save them?” and “And this is meow cat” (a play on “and this is Xau-Tak”) find their origins in Nomad’s Elegy as a reference to the mysterious and Lovecraftian horror of the deep seas known as Xau-Tak. What does this then mean? It seems as though Rabid Jack was merely being used as a pawn in Xau-Tak’s plots, with the Crassians and Kraken-like creatures being other minions of this deity. What then might he be planning, and how soon will we find out? The portal during the temple fight shows a great hand which will crush the player if allowed, and it certainly seems as though this is to be the hand of Xau-Tak. If this is so and not merely a hallucination, when was this portal opened? Is it recent, or was Xau-Tak a god of dragonkin worship at the time of the temple’s operation? Much is left unanswered from this quest and I find it hard to believe that we are done with this storyline entirely.

In the end, the quest was solid. Great dialogue, witty details tossed in all around, nods to old quests and hints at new quests. If you haven’t finished this one yet, get to it! Keep questing, everyone.