Whether you have a moderate level of experience with the world of weightlifting or you have never once touched an iron plate or stepped foot in a gym, this article is for you. For the last five years, I have been investing over 10 hours each week in an effort to better understand the mechanics of my own body and how these movements can be optimized. Although I would add the disclaimer that I am not a certified professional, I have the experiential and research-based knowledge to at least help people better understand the movements here discussed and will add links to professional authorities for further reading/watching if anyone would so choose.

Before we jump into the movements, I just want to briefly define a few terms. The lifting school which I most identify with and will be speaking from is called “powerlifting,” a method of resistance training which is focused around three primary movements: the back squat, bench press, and deadlift. The emphasis of powerlifting upon raw strength in the realm of achieving a one-rep maximum (1RM) lift, meaning that lifters will be judged upon the most amount of weight that can be lifted for the specified lift for a single repetition. This differs mightily from bodybuilding, another lifting methodology which places the emphasis on training not upon raw strength, but upon aesthetics and muscular size. Note: big, showy muscles often do not equate to strength, although they might. Many powerlifters are big, but not nearly as muscular or as “shredded” as competition bodybuilders are. These two differ as well from “Olympic weightlifting,” which is of course what one sees at the Olympics. This type of lifting focuses similarly to powerlifting upon strength but instead focuses on two movements: the snatch and the clean and jerk. These latter two methods of lifting weights will be dealt with in subsequent editions of this series, but in this article series we will look at the powerlifting “Big Three”: bench, squat, and deadlift. These lifts are easy to get into and only require the most basic of gym technology: bars and plates of iron. 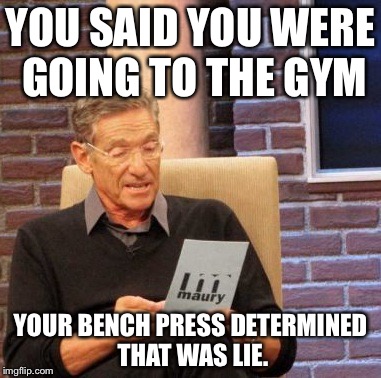 Ever heard the classic, “how much you bench, bro?” That’s what this is about, as I assume many of you are at least somewhat familiar with the phrase and movement. Much like a pushup in reverse, the bench press involves letting down and pressing up a weighted barbell. The movement works several large muscles in the upper-body and is often seen as the ultimate expression of upper-body strength.

Basic Movement: The bench press involves the lifter lying flat on his/her back with the bar unracked and held in a position directly above the shoulders (position 1, or P1) before the bar is allowed to descend to the mid-chest in a fluid and straight motion. The barbell is to touch the chest (P2) and then be pressed using primarily the chest, shoulders, and triceps to return the bar in the same way it descended back to P1.

Muscles Recruited: The bench press primarily works the muscles of the chest (pectoralis major), the muscles of the back of the arm (triceps brachii), and the shoulders (anterior deltoid). In professional lifters, the back muscles are also worked secondarily as well as the legs (“leg drive”) but this should be only done when the lifter has perfected the basic movement. Feet and Hand Placement: Contrary to the belief of some, the feet are crucial to the bench press. They allow the lifter to be properly stabilized and allow for more efficient energy transfer. The best position for the lifter is to lie flat with the feet firmly planted on the ground throughout the entire movement. This also means that the lifter should by no means allow his lower half to leave the bench (the butt, in particular) at any point during the lift. Hands should be placed somewhere just outside of shoulder-width. The main emphasis on hand-placement should be that they are placed in such a manner that, while in P2 of the movement, the elbows are at no more than a 75-degree angle with the side of the torso. Flaring one’s elbows out during the only movement will only lead to shoulder/elbow injury.

Going through the motions:
1. Lie flat on the bench and firmly grasp with straight wrists the barbell in proper hand positioning with feet firmly planted (barbell still on the rack should be straight above the eyes of the lifter).
2. Either with or without the help of a spotter, press up to remove the bar from the rack and slowly move the bar over the shoulders, P1.
3. Briefly, stabilize the weight, breathe in deep and brace your feet and back by pressing lightly against the floor and lightly contracting the back muscles.
4. Slowly bring down the barbell in a straight line from P1 to the mid-chest, P2.
5. After a brief moment, press the bar up using your chest and arms in the same way that the bar descended, returning the bar to P1 (release held breath as P1 is reached and repeat breathing technique for each repetition).
5. Repeat as many times as necessary. 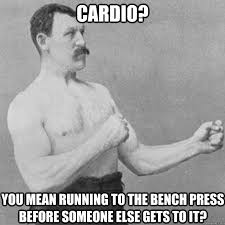 The website and resources that StrongLifts and Starting Strength both provide are perfect. Check out the guide that Stronglifts provides here (with fun pictures).

This video, along with the other three of its kind in a series by Mark Rippetoe of Starting Strength:

This video by Alan Thrall, also certified by Starting Strength:

Well, that about does it for the first of our three movements! If this interests you and you want to learn more about other movements before I’m able to write about them (particularly the squat and deadlift), check out the rest of the videos at Starting Strength’s YouTube Channel. Also, if you have the resources at your disposal to use the necessary equipment, have familiarized yourself with the three movements and want to give a basic lifting program a shot, check out the program provided for free at Starting Strength’s website.