Take a moment and close your eyes for me. Well, hold on. Maybe keep them open. You do need to read this part. Simply imagine, if you will, the epitome of the grandfather figure. A man who has lived, travelled, adventured here and yon with countless stories to tell, knowledge and wisdom beyond measure. Now imagine what this figure looks like. Does he look like this?? 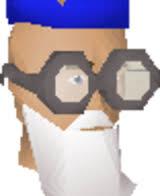 If not, you’re wrong. This man is your perfect grandpa, paps, poppy, peepums, what have you. He seems to be the representative of all things quests, adventures, and even sometimes lore. The community seems to love him, the ladies love him, I love him! But why? What has this enigmatic geriatric endured through his years in order to shape the wizened old bag we find in Draynor Village?

The Wise Old Man’s real name is actually Dionysius, and he was born in the bustling city of Varrock. He grew up in the service of Papa Smurf himself, Saradomin. Although he enjoyed his time considerably enough to vandalize the local Zamorakian Temple with the words “Saradomin pwns”, he turned down a prestigious offer to study on Entrana with the priests there, opting instead to go out adventuring across Gielinor.

Early on in his adventures, he came across the dwarves of Keldagrim and helped defend their mines from invading trolls. He then went on to aid a mountain tribe in repelling enemy creatures and help the Karamjan peoples discover the use of powerful herbs in combat before attempting to map the Kharazi jungle with other famous NPCs before being halted by a rising Jogre War. From there, Dissy traveled the Kharidian Desert, not only touring Menaphos, the pyramids, and living with the Bedabin, but also fighting the Kalphite Queen herself.

Finally having seen so much of the world, the Wise Old Man took to Entrana to study once again before going off on more adventures and eventually deciding to settle down in the humble Draynor Village.

Having saved so many, aided countless more, and traveled the realms for most of his life, Dionysius found himself relatively destitute, only affording his shack in Draynor as his reward and comfort for his efforts and altruism. Not like adventurers nowadays, back in Dissy’s time adventurers didn’t really get any compensation for their troubles outside of gratitude and pride. Frustrated by his feeling unappreciated, he was able to justify in his mind the possibility of pulling a bank heist. On that fateful day, Cool Mom227 lured away the market guard, giving Dionysius his window of opportunity. Blasting open the bank wall and killing several characters as well as bankers, the Wise Old Man pulled the robbery and stole poor Elfinlocks’ blue partyhat. He then proceeded to kill a random event character and destroy the evidence by breaking the security tape. In spite of the overwhelming evidence that the man living next door to the bank had committed the crime, the authorities were so afraid of the Wise Old Man that they simply left him be. The Temple Knights do keep a relatively close eye on him to this day, however. 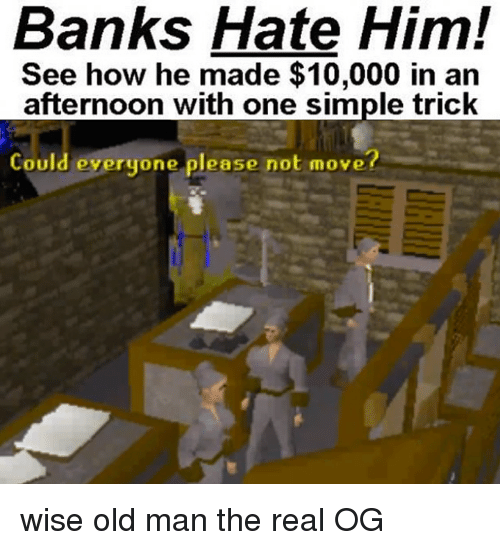 Characters first truly encounter and get to know the deeds and personality of the famed old geezer in the quest Swan Song. Piscatoris, a far off fishing colony in the northwest, is being threatened by sea trolls and beg for the assistance of the Wise Old Man in order to quell their threats as apparently he has helped them before in his adventures as a youth. The player the retrieves him from his humble home and takes him off as what seems to be his last adventure, and together defeat the Sea Troll Queen. (The player then attempts to claim Dissy’s partyhat as a reward but is met with zero acknowledgment that the request was even made)

However, this quest turns out not to be the last adventure the Wise Old Man and the player go off on as they meet again in Love Story. Throughout this journey, Zenevivia makes her appearance claiming to be Dionysius’ girlfriend and seeking out combat with the old man in attempt to settle and old score. With the player’s help, Dissy defeats her in his own NPC-owned house. Immediately following her defeat, she and the Wise Old Man decide to team up in order to go through with his plans to rob the Wizards Tower of its runes as he was low on his personal stash, but were driven off by a Thingummywut resulting in their vowing never to live up to a life of crime again. Today the two live in relative peace and happiness in Draynor Village.

But what is it about this man that makes so many adore him? I would posit that the player finds a sort of likeness in the Wise Old Man that is relatable. This man has adventured, seen the world, saved lives, taken others and is now at the end of his race. For some, maybe this is a sort of look down the corridors of time to what might be (if the character would ever age). The Wise Old Man is silly, yet powerful, foolish to some, yer revered and feared by so many. The Wise Old Man is the perfect confluence of wisdom and light-heartedness. Jagex humor added to an old grandpa that knows the world more than you ever might. This is what makes the Wise Old Man one of the greatest icons of Runescape history.