Menaphos. A city that, if I recall, is only a year younger then Prifddinas when it was nothing for a set of walls surrounding an empty field. Took 12 years to make. That’s how you know it was done right.

I really don’t want to talk too much about this place because it is an absolutely incredible masterpiece of visual and audio art, and I really can’t do it any justice with words alone. There are jokes with nearly every examine and NPC chat, the terrain is dynamic and colorful, and there is a considerable amount to actually do within in terms of questing and skilling. I highly recommend you guys come check it out. If you’re F2P, save up for a Bond.

In fact, I’ll help get you started. 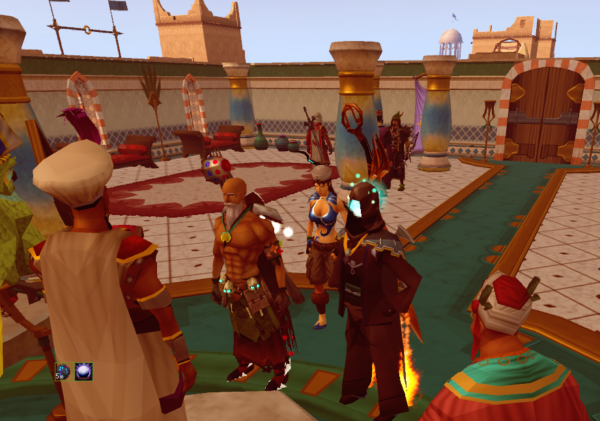 First, head over to Al Kharid and talk to the boss man Ali. Y’know, after you rescue his sorry hide. 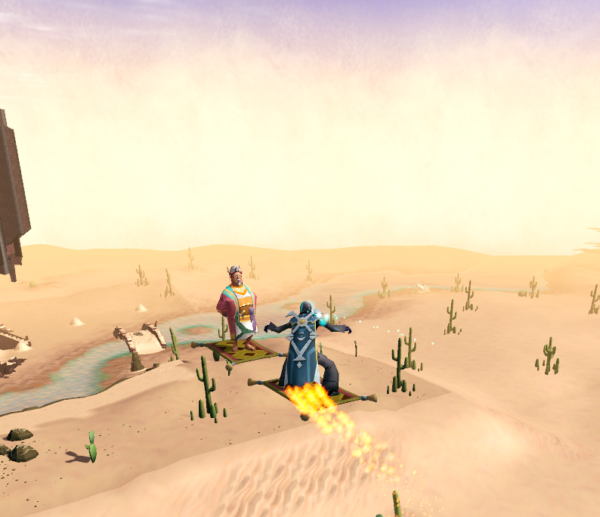 Then you get to fly around the desert with this guy, who styles the fudge out of you by flying around you in circles. Just so you can enjoy the desert as much as possible. Because it’s a cool place. Gets you in that mood. I really appreciate the extra effort here; unnecessary to the plot, but still totally necessary for the experience.

Then you get to the gates, and you get inside, and then you get a little orientation and start your first quest for reals, and then… well, enjoy your new playground: 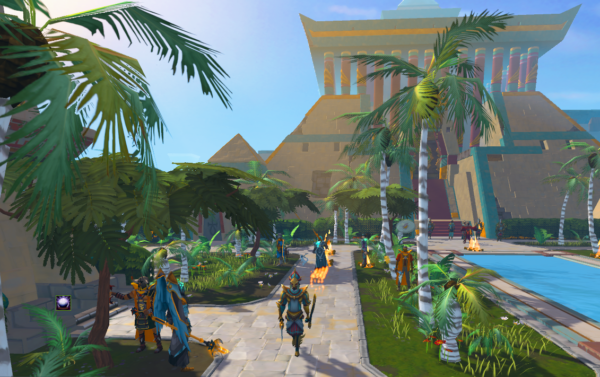 On the surface, it’s beautiful. An entire city ripe for exploration and lore gathering just by looking for all those little details. There was a lot of thought put into this one. So much so that it puts other, older existing content almost to shame. Try going here, then teleporting to Ape Atoll. Like playing two different games.

I should remind everyone that Menaphos is, by no means, a replacement for Prifddinas when it comes to skilling. It still offers the best rates around. It’s just… they figured out an interesting way to keep us hooked in Menaphos. While I don’t agree with this method entirely, I respect it for its impressive effectiveness.

Yeah. Big surprise. Do something a lot, you get unique “levels” for doing something in a specific way that unlock rewards of some kind. Usually used to make players do something for a good long time in order to either unlock an improved exp rate doing that same thing, or something more convenient, or something

Now, this isn’t just for cosmetics, as many prestige instances are throughout Runescape; you actually need to nearly max the prestige if you want to do the quests. It’s a whole new style of quest requirement. In a nutshell, it means that I must train in Menaphos for a good long while before I can actually do any of the new quests.

Oh wow! Why am I not raging? Surely me being unable to do a quest directly after its release would make me tear my hair out in frustration, right?

Not so much. If I just went right ahead and did all four new quests one right after the other… well, that would be an afternoon of fun. All that hype and intensity for an afternoon of fun, and then maybe I won’t ever go to Menaphos again because it’s mainly mid-level content. Now wouldn’t that just suck after spending so long making something that only lasts an afternoon?

No, this is how they draw the content out. This is how we’re made to actually stay in Menaphos and consider training there despite there being much faster methods. With the promise of leveling up prestige for viable rewards. It’s not that they make us have to do all there is to do in Menaphos, it’s that they make us want to do it. I wanna do those quests, so I’m getting my prestige as fast as I can. Thankfully, they have good daily methods for that already in place. Same goes with the potential rewards, like cosmetics, pets, and banking boxes. Maybe somebody really wants the Ports outfit to complete a look they’re going for, so they have to prestige as much as possible.

So yeah, that’s the sad truth of games. To make content last as long as possible, you have to delay stuff as much as possible. And then you end up with this; 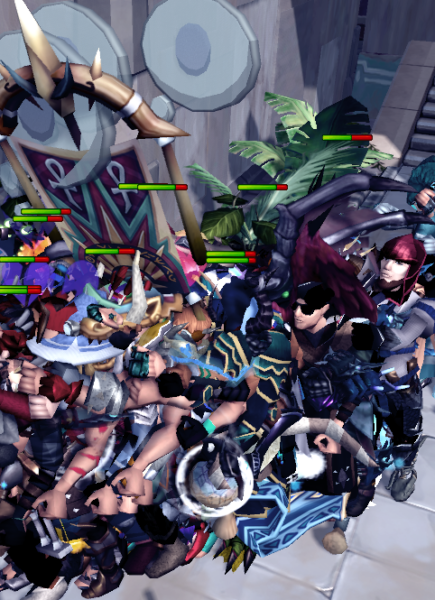