The Wilderness Task set. Boy, was I dreading this day. We all knew it was coming sooner or later, and the thought of having to trudge that scary place performing tasks just to maintain our status of taskmaster is enough to petrify any avid treasure trail follower. It’s long been one of the most dangerous places in Runescape, and having to perform achievements out there would make one second-guess how important the status even is to them.

Nowadays, if you just confine yourself to a two-handed weapon with chest and leg armour, you can pretty much do whatever you want up there risk-free. Add the new banks, all the teleport options, and the fact that the place is more or less deserted for the more tastier money-makers out there, and you end up with one of the easiest task lists to date.

Yeah. Easiest. Usually it takes me a week to get through an entire list. I pulled this one off in a couple evenings. 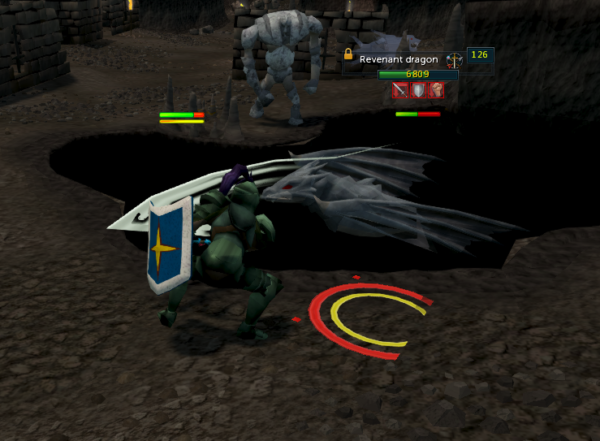 Yes, this is very relieving to me!

Now, I love the achievement diary series. It takes already existing and familiar content and not only expands on it, but it also helps give you ideas for training methods and informs you of the existence of obscure areas. Then for persevering until entire sets of tasks are completed, it rewards you with equipment items that expand the area’s benefits even more in a subtle, but useful way. Not to mention wearing the entire tier 4 set makes you look pretty darn rad.

The reason I love it is because it is simple. “Fish a shark at this spot.”, “Collect 5 Palm Leaves.”, “Use a multi-cannon to murder a chicken.”. Simple, mundane tasks given purpose and reason.

A lot of mundane tasks. Each one with different requirements for clearing; some even requiring levels you don’t even have yet. This gives you the incentive to train your skill to the point you can complete the task and have one more check-mark in your list.

That’s what the achievement diaries are for. They’re incentive to go around and experience what the Runescape world has to offer. Think of them as a very in-depth Runescape guide. Or a series of Runescape advertisements. They’re good for adding substance to the game. Reasons to do all the simple things the game has to offer that one would usually pass by.

How do they differ from quests, then? Well, thing is, they actually don’t. It’s why they have almost the same icon. They are just like doing quests, except the goal is your own. The only way they differ is that quests actually take you to a specific set of places in the world, some quest-specific, in order to tell a story. All the achievements do is take you around the general areas to help you familiarize yourself with the world and allow you to create your own stories. Two sides of the same coin here.

With that in mind, I don’t PK. Never really enjoyed it. I don’t like dying and losing all my hard-earned stuff. I’m a bit of a hoarder by nature. It’s in my personality.

And that’s fine, Runescape’s not all about PKing. There are plenty of things I can do otherwise. Otherwise I wouldn’t bother playing Runescape. I’d play a different game. One I would enjoy playing. Kind of the point of computer games, you know, because you really don’t get anything else out of them. What I like doing instead are quests. And achievements.

So, when the wilderness achievements came out, I was uncertain because I really wanted to do them, but they were in a location I didn’t want to go. Bit of a conflict of interests there. Fortunately, none of the tasks involved killing another player. They were all about skilling, killing monsters, and going to places. And because the wilderness wasn’t too overly populated and I was able to get around using my treasure trail gear, I was able to bring myself to enjoy this particular task set the same way as any other.

In general, this update is another set of tasks that are just as comparable with the others. Higher level tasks are harder to do and require more levels. As for the reward, the most you’ll probably get out of the sword is its extensive teleportation network throughout the wilderness. Otherwise, none of its perks are super game-changing. Unless you like, eat, and breathe in the wilderness; then it’s a god-send because of the many extra conveniences it gives, like teleportation to the Warbands camps, choosing your destination at the teleport obelisks (about time!), improved Forinthry dungeon drop rates, and the air obelisk shortcut. Otherwise, the sword itself just helps to complete the rest of the achievement diary outfit. 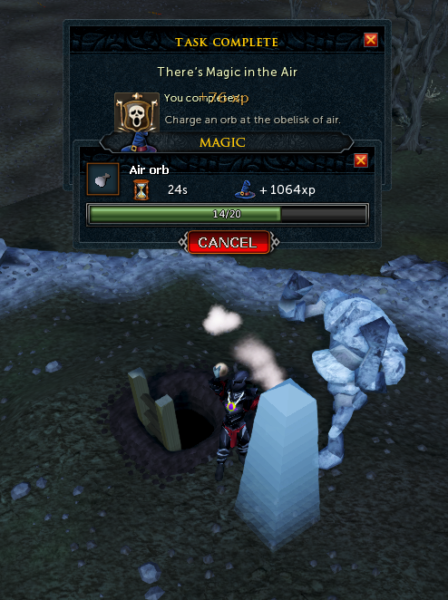 All in all, a great update for something I initially wasn’t looking forward to. Kept me busy and excited for a couple days at least. Danger aside, it was neat to explore the wilderness again and see how much it has changed since I was last there. And considering I was last there probably back in 2012… well, I didn’t know where anything really was anymore.