The Quest to End All Quests

We’ve finally reached what was hyped as the climax of this 15th-year celebration of looking back at Runescape’s storied history. The Gower Quest. We were promised irreverence, silliness, classic British humour, nostalgia, and references aplenty. Did this quest deliver on expectations? Let’s see…

**OBLIGATORY SPOILER WARNING: DON’T READ IF YOU HAVE NOT DONE THE GOWER QUEST AND DO NOT WANT TO BE SPOILED**

To give a brief background for those that may not be aware, The Gower Brothers (Ian, Andrew, and Paul) were the original founders of the game we all know and love with the help of the rarely-mentioned Constant Tedder. The brothers watched the game grow and develop, staking a large claim in the thriving MMO market. Runescape, under their leadership, transitioned from a rough-around-the-edged multi-user dungeon to a fairly polished game with serious recognizability in pop culture. All but Ian left around the end of 2011, but their influence on the game still remains. Andrew was typically seen as the writer and overseer of company operations, Paul the story nerd and quest writer, and Ian the one who worked on the more behind-the-scenes stuff.

The last quest Paul worked on writing was Ritual of the Mahjarrat, and many would agree that this quest along with While Guthix Sleeps signalled a transition in quest tone. The vast majority of early Runescape quests were simple, light-hearted, and often were used to jab at the boring nature of quests found in other games. However, the last 5 years have seen big storylines emerge as the primary form of storytelling in the game. Smaller, less explosive quests seem to be overshadowed by big, booming, impactful developments in the game lore. This quest seeks to evoke the nature of “old school” questing, and I feel it did just that and more.

Our journey begins at a farm south of Varrock, which apparently now is the property of the Gower brothers. All three are there, in-game, and their models are spot-on. The problem the player is presented with is that the cabbages no longer are growing, for some strange reason! And of course, the best way to find out exactly why this is to speak with the cabbages directly. The Gower brothers claim they would help us, but because we so often insist that we loathe handholding in quests, they’ve decided to be so kind as to let us figure it out on our own. This was the first of many small in-jokes that made this quest perfect.

After fiddling around with some small things found on the farm, the player successfully crafts a Cabbagespeak Amulet. And boy, was it worth it. The strange diction of the cabbages was silly, somewhat bewildering, but it felt exactly how I imagined it would be like speaking to a cabbage. According to our Brassican comrades, they are rioting because they do not have party hats and refuse to grow until they get what they want. “We leaf, we chief!” was the line that made me lose it. However, it is then found that this riot was not the true root of the problem. To get to the real source of it all, we must traverse the Black Hole “realm” to reach the “behind sceneries”! Using a recoloured Disk of Returning (which is also, of course, untradable), the player is abruptly whisked away.

The Black Hole was almost a perfect callback to Jagex’s earliest form of player punishment outside of the fact that here the player cannot be seen, but has the ability to move about. Through a series of old-style use-this-thing-on-another-thing puzzles, the quest then proceeds on into Thordur’s office through the Gates of Lloigh-enn (a reference to the old flames on the RS2 login screen). Here, we are informed that in order to reach the “behind sceneries”, we need to be filed as some sort of new content! Regardless of which option is picked, the player finally is taken to the magical watering hole that is the Behind-the-Scenes Bar. 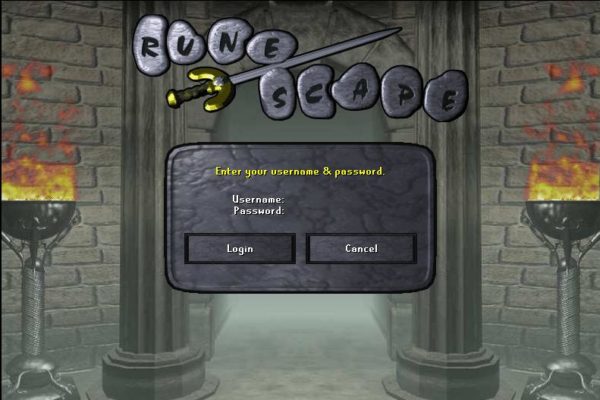 This place makes the quest a 10/10. So many characters to talk to, such perfectly thought-out humour, bumpin’ music, and much more. I want to go here in real life. Seriously. Knock back a brew with Sueros whilst poking fun at Lucien? Yes, please.

Tea with Mod Raven and Guthix, discussing politics and philosophy? Where do I sign up??

But I digress, I think you can tell I love this place. Seriously, talk to everyone, take your time to examine stuff, just drink it all in! You may find some stuff you wouldn’t have caught otherwise… 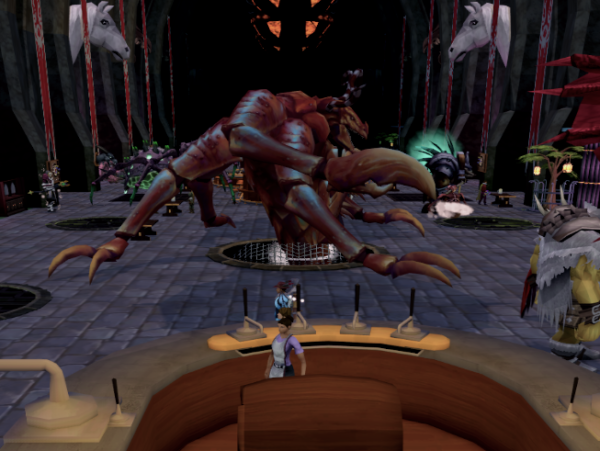 From here, we talk to Spiral Orb only to find that the Life Altar, the fundamental source of power for cabbagery (located in the basement of the bar) has broken and that three pieces are needed to fix it! Three characters in the bar have eyes on each piece, and so it’s now our job to find Lucien, Steve the Chaos Elemental, and Thok in order to retrieve these fragments.

First, Lucien will inform the player that the Wise Old Man has already stolen the piece and hidden it away in his personal back chest. In order to recover this piece, a bank heist will need to be staged after forming a crack team of specialists. To distract the clerk, Romeo agrees to help out after being given some rather interesting dating advice from each of the God Wars bosses. For the job of distracting the guard, the actor Guthix joins the squad in exchange for our help in getting him to join a group of acting cabbages in a production of “Put Those Edicts Back Where They Came From, Or So Help Me!” Next, we need a way to remove the gate from our path and the perfect duo for the job is good ol’ Tim and Crunchy! After quenching the thirst of some other environment artists, their services are ours. Lastly, a lockpick specialist is required, and a certain penguin named Sphenishchev is just what we need. The only thing is that the poor fellow is afflicted by a condition that prevents all who meet him from ever remembering having encountered him (a joke about a 2009 hide-and-seek glitch that allowed players to click repeatedly on penguins to stack up tons of points). The heist is then staged, and the piece is ours!

Next is the lovably erratic Steve, who then directs the player to the Grand Exchange portal for a lovely little pipe puzzle for the second piece. The puzzle is befuddling at first, but once one takes the time to look at it a bit, there’s no need for a guide. Through the whole thing, a myriad of economic jabs are made in the chat window, making allusion to several instances of economic shift in Runescape as well as many common knee-jerk reactions of the players. Puzzle done, now on to the final shard!

Thok is kind enough to drink with us and tell us that Max is taking care of the piece he has in the Beta Portal, so we should find him there. We then find Max there, and his dialogue is nothing short of brilliant. Star Wars jokes, the ability to taunt his inability to train Invention, and more are here to be found. Max refuses to fork over the last piece until we’ve maxed each of the three beta skills… Riding, Sailing, and Bankstanding! True to expectation, these skills are meant to be as camp and silly as possible, and they deliver. On top of that, we get a nice chemistry joke upon examining one of the skill doors! That’s it, the last piece is in hand, and time to save the day by fixing the Life Altar.

But oh no! The graphically reworked Black Knight Titan has lured us for our Disk of Returning by killing the Cabbagemancer and setting a trap he knew we would spring! However, by fending off the Titan’s attacks and summoning the Gower brothers to convert the life runes to cabbages, the lure proves unsuccessful. Ian does have pity on the poor creature, sadly, and allows the new model to enter the real game anyway (with th ability to toggle him back by speaking to the old model at the bar after the quest). With the Life Altar repaired, cabbages are growing again, the Gower brothers have become the new cabbagemancers, and the player can now continue their journey know that they’ve done some good in the world… Or at least in some world.

In summation, this quest is as close to perfect as it gets, In my opinion, we’ve been in dire need of light-hearted adventures with little to no lasting story implications and this felt like a glass of cold, unsweetened iced tea on a hot day. Refreshing, lively, spirited, evocative, and just downright fun. I think we need more quests with this sort of tone. The fourth-wall breaking will get old if they continue to use that trope, but if they leave it be for a while, it’s another ingredient in quest-writing that can spice up the whole dish. So please, if you’re reading this and have not done this quest, you are without excuse! Go out and experience the joy for yourself! You certainly will not regret it.