River of Blood: An End to My Quest Line

From almost the very beginning, I’ve been attached to this series of quests. Something about it transcended what I’ve always felt makes a solid quest line. Maybe it was the mysterious nature of a previously unknown race and land. Maybe it was the concept of becoming a freedom fighter, and toppling a regime from within. Maybe it was the environment, the general atmosphere and gravitas that each installment brought with it. Maybe it was all or none of those things, but whatever it was, this was my magic series. Running through the murky swamps, climbing and making my way through the maze of Meiyerditch, defeating challenging boss battles, immersing myself in the dark undertones of despair, suffering, oppression… And now the series is at an end. The capstone quest was one I’m not soon to forget, but for reasons good or ill? Read on, and we’ll flesh that out on the way. 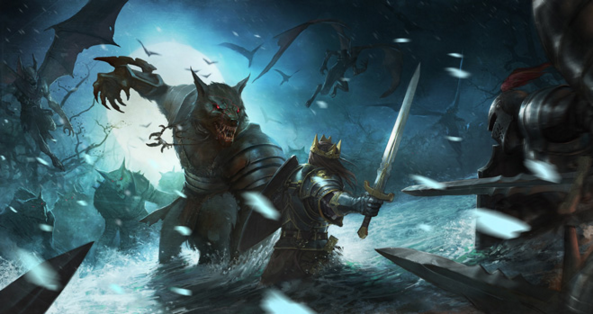 We begin our journey following the assassination of Lord Drakan and the “death” of the beloved Safalaan by speaking once more with King Roald. Business as usual here, just rallying the armies of Misthalin to fight at the River Salve! After getting this squared away, we meet Aeonisig and Captain Rovin at Paterdomus, preparing for the upcoming battle. We arm the men that are there and are directed to clear the temple of the Zamorakians.

This was my first minor issue of the quest. I realize that the men here were portrayed as a radical offshoot of your normal, workaday Zamorakianism, but I by no means align myself as a Saradominist. There’s really no option other than KILL THEM ALL here. I know it’s small, I’m simply suggesting that given the fact we are offered a choice (be it real or illusion) in almost every other quest decision, and it felt odd to be forced in this rather narrow course again.

My nitpicking aside, this stuff was fairly simple and unremarkable. We are then asked to find a way to somehow strengthen the Salve. This is where things get fun. Not much is really known about how the Salve was blessed by the seven in the first place, and we get a bit more of a look into this. Although Drezel finds the text to be too fringe and “heretical,” it seems as though the original blessing was done using a blood sacrifice of sorts, which ended in 6 of the 7 dying and Ivandis being the lone survivor. Eventually, the curse began to impact him, and he slowly became a vampyre himself, forced to live out his days on the Moytanian side of the Salve.

After we learn all of this from a cleverly hidden away book in the Paterdomus library, we seek out the hidden tomb of Ivandis, and open it to find it without a body, but stuffed with goodies! A silvthril bar, some serum, a recipe, and some pages that, when added to “Blood of the Covenant” create a cohesive end to Ivandis’ tale.

Through his transformation, Ivandis happens on a woman who helps him craft a sort of cure for vampyrism, but it’s too late for Ivandis as he is too far gone and refuses to let himself become a vampyre completely, so it’s implied that he faces the Salve one last time at Paterdomus, losing his life to the blessing that has become his own curse.

Oof, Ivandis was my guy… Right in the feels… Anyway! Using the recipe and the knowledge from our recent grave-robbing extravaganza, the Super Guthix Balance Potion is born! We don’t know exactly what it will ultimately do to vampyres, but it’s worth a shot, so we toss that bad boy down the well (pourin’ one out for Ivandis).

After doing all we feel we can, Vanescula meets with the player on the bridge, but neither side has any intention of budging from their position, so the armies marshal, and it seems war is imminent. Vanescula then attempts to send some of her minions across the Salve, but the most recent bandage on the barrier causes them to turn feral. There doesn’t seem to be much explanation to this, but it makes sense as this “cure” was never proven by Ivandis. After the rabble has been dealt with, a strange creature wearing familiar clothing shows up. What Vanescula calls a “wyrd” has an even more insatiable bloodlust than the vyres, and attacks Drezel, Ivan, and the player. Drezel goes down, but c’mon. Did he really have a chance? After the player does enough damage to put the wyrd off for a bit, BOOM. Queen Efaritay rocks up on the scene!

All I can say is this: I called it. Although I was certainly not the only one, and it was rather obvious, I feel it necessary to temporarily bask in my correctness. For those who had forgotten, Efaritay is an Icyene who ruled along with her human husband, Ascertes, in what was once Hallowvale when the Morytanian lands were under Saradominist control. Ascertes, as we have recently learned, was turned into the vyre we came to know as Vanstrom Klause, now dead. She shows up on the bridge and sends the wyrd along with the rest of Vanescula’s army back to where they came from, at least for the time being.

We find that Drezel does, sadly, succumb to his wounds, and seek out Efaritay once again as she has gone to mourn the loss of her loved ones in the Icyene graveyard. Upon further investigation of the events of the previous quest, the player comes to realize that Safalaan may not have died after all, and it is Efaritay’s believe that he must be the wyrd we encountered at Paterdomus, transformed into his current state as a result of the bite from Vanescula. The sunspear is then reforged, and the player is back off to the Meiyerditch laboratories to attempt to find a hidden secret which might hint towards the true cure to vampyrism. Here we encounter Sarius Guile, whose father had spent much of his life seeking the cure. The player manages to uncover his “hidden” research notes, and from this it is determined that we will require refined daeyalt ore (which was imbued its power by exposure to the Stone of Jas), Ivandis’ serum, and blood of “the hybrid,” which is suggested to somehow be part icyene for its purity, part vampyre for its taint, and part human for its malleable nature. Lucky for us, our dear old friend, Safalaan, will provide just the blood we need.

The player then makes their way into the basement of Castle Drakan, the location of the daeyalt refinery. A fairly simple puzzle ensues which mimics the blood lock puzzle from the previous quest, yet simplified greatly. After a lump of refined daeyalt is finally obtained, the player is attacked by Safalaan from his recharge tank of sorts. He poisons the player, causing dizziness and hallucinations, and makes for what was quite possibly my favorite atmospheric effect of any quest in the game thus far. Essentially, the player goes on LSD for the next few minutes as we traverse a strange amalgam of Castle Drakan and other game-world aspects such as the Grand Exchange, the Stone of Jas, and other strange imaginings.

The camera colors are all jumbled throughout, and you definitely feel out of sorts. This sequence made the quest stand out for me, no doubt about it. As the player reaches the roof of the castle, the acid trip continues, as a fight with the wyrd commences. Although it starts out just as the previous encounter had transpired with Safalaan, we now imagine him transforming into Vanstrom Klause as well as Lord Drakan throughout the fight, adopting those bosses’ special abilities with each transformation.

Now I may be making a somewhat controversial stance on this, but I feel like it’s necessary. This boss isn’t hard. Its mechanics are simple, rather predictable, and don’t take much to master. I would go so far as to say that both the Vanstrom and Lord Drakan fights in the last two quests of the series were more challenging. Yet I do not feel this was a bad decision. This quest series has never been focused on the combat, the boss battles, it was concentrated on the story and atmosphere of each installment. The finale was no different, in my mind, and accomplished exactly what needed to be done. The boss fight was unique in that it managed to smoothly integrate aspects of all three bosses, making the experience feel organic. The color changes were unsettling and beautiful, simultaneously. Everything felt right about this boss battle. Whether you feel a grandmaster quest should have a big bad boss at the end waiting for you or not is up to your own opinion, but I’ll take a quest that has atmosphere, great mechanics, lore, and great dialogue over an Araxxor-level boss experience any day of the week (Ivanday through Essianday).

After defeating Safalaan, the player and Efaritay talk some sense into the poor fellow and get some of his blood (conveniently, it seems he already had a vial on his person). On the spot, the Extreme Guthix Balance Potion is mixed up, and Safalaan takes a sip, allowing him to continue gaining a modicum of control over his bloodlust. We return back to Paterdomus, and this time we pour one out into the well for good ol’ Drezel. We’ll miss you, baldy.

Soon after, Vanescula returns with her army to cross once and for all, but the vyrewatch she ends up sending across the bridge quickly are transformed back into their human selves! (Easter egg: these four were among those who were “missing” from Burgh de Rott in the months leading up to the Lord of Vampyrium.) At this point, Safalaan is then summoned, but little does Vanescula know of the cure that has been administered to her pet, as he transforms back to his old self when he appears on the bridge. Together, the player, Efaritay, Ivan, and Safalaan manage to broker a truce with Vanescula. Darkmeyer and Meiyerditch will now be ruled more democratically, and Misthalin will remain in peace. The quest ends with a rather ominous tale from Vanescula, however, regarding a time when House Drakan was once defeated, and her retaliation was to slowly poison the head of the house which had defeated them. She warns the player to watch themselves, as she may be seeking to poison their cup as well…

This quest was close to perfect. It had, in my mind, a true sense of exploring and adventuring (at least throughout Morytania), amazing lore revelations (learning more of Ivandis and discovering the secret to haemalchemy), and great environment. A few small things itched at me strangely, namely Efaritay’s timely and inorganic initial arrival and reveal on the Paterdomus bridge, as well as the issue of trueborn vampyres being able to still cross the Salve (how many of them are just transformed humans?). These details aside, I’d say this quest is at least deserving of a 9/10. I don’t think I could have wrapped this line of quests up any better myself without killing of the vampyre race or driving them back to Vampyrium entirely, so kudos go out to The Guardians for crafting yet another great quest. Hopefully, we can meet some of the survivors again for some (Sixth Age?) adventuring, but until then, this was a satisfying conclusion to what has always been, and always will be, my favorite quest line.