Winemaking in a Nutshell

When I entered Purdue University as a Food Science major in the College of Agriculture, I wasn’t exactly sure what exactly I wanted to do with my life. I grew up on a farm in rural West-Central Indiana and only knew that, despite agriculture being crucial to my life, I didn’t want to live the life of a farmer. Before my freshman year had begun, I actually was shown around the Food Science building on campus by a friend of my parents (and head of the Enology Lab), with whom they had both attended school all the way up until college. Little did I know then that she would quickly become my employer and one of my closest and most trusted advisers.

Last year I finally found what I wanted to do, and it had to be in the world of wine. Despite being underage at the time, wine was a drink that had always fascinated me. My mother’s side of the family is Catholic, and true to the stereotype wine was around a lot of getting-together experiences on that side of the family. Mind you, the swill left at the bottom of a communion cup is no Grand Cru Bordeaux, but it was more than nothing to a little kid who never got to drink alcohol outside of the times he attended mass with grandparents. My great uncle and aunt also drank quite a bit of wine, and it was always much different compared with the cloyingly sweet wines that my mother purchased on occasion to stock the garage refrigerator. What drew me most to wine, outside of my background, was that it’s really a form of art. Harvesting grapes just at the peak of ripeness, choosing the proper yeasts and fermenting temperatures, whether to add oak to reds or chardonnay, which wines to blend and when to blend, the list goes on. Good wine is fairly easy to make with some knowledge of the stuff, but great wine requires a delicate hand and passion to make every drop the very best. 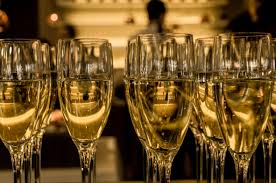 Now that I’ve given you a preface about how my interest in wine began, let me actually enlighten you all on just how wine is crafted, for the most part. Mind you, this is certainly a watered-down version of the full process, but it should at least give you a good idea of how the stuff is made and what wine is at its basest level. I would implore that regardless of your experience or interest in wine, you educate yourself at least to this limited capacity. Wine is ubiquitous in many upper-echelon business settings and a knowledge of the somewhat arcane beverage is likely to give you an upper hand in those sorts of occasions. Just one less thing to worry about!

If you weren’t already aware, traditional wine is made with grapes. However, to be classified as “wine,” the beverage need only be a form of fermented beverage using fruit as its base, typically between 10-16% ABV (alcohol by volume). To give you some perspective, the average beer is around 4-8% ABV. For the sake of simplicity, the only wines I’ll be discussing here are wines made from grapes. As far back as 4000 B.C. or so, we see the first traces of early winemaking in Greece using clay jars. For most of its history, wine was necessary for the safety it provided as most drinking water at the time was far from pure. In its ancient practice, grape juice (and juice from other fruits eventually) were simply stored in containers and, as a result of natural yeasts present on the skins of the fruits and in the air, these juices would slowly begin to ferment into a wine of varying quality. This technique is still used today by some winemakers, but it’s extremely unreliable, and leads to more common wine flaws, stuck fermentations, etc. 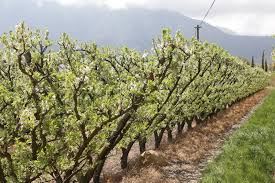 In the modern age of winemaking, things are a bit different. Grapes are grown, typically of the Vitis vinifera variety. These grapes are different from typical native American grapes (Vitis labrusca and other) in that although they are more difficult to grow and maintain, their fruit are often more nuanced and the wines produced thereof are the deepest in character. Vinifera grapes include the traditional wines most will think of when wine comes up. From Merlot to Carbernet Sauvignon, Pinot Noir, Chardonnay, Zinfandel, Malbec, Cabernet Franc, Sauvignon Blanc, and hundreds more. These grape varieties are primarily native to Europe. Labrusca grapes (like the Concord in Welch’s grape juice) are typically hardier and more basic in flavor, and are usually seen as inferior in wine quality to vinifera, and thus are rarely sold on a commercial level.

Grapes are harvested in the Northern Hemisphere in the late summer and early fall, usually picked at a level of brix (a measurement of sugar content in the fruit themselves) that will lend itself well to the nature of the wine one is aiming to make. This is because the amount of sugar in the grapes used to make wine is proportionate to the amount of alcohol produced during fermentation. More sugar (later harvest) yields higher alcohol concentration, and less sugar (early harvest) leads to lower ABV. The harvest is usually decided by the winemaker(s) and/or the vineyard manager(s) depending on the size of the operation.

Once harvested, all grapes are kept separate by variety (typically) and are put through a crusher-destemmer. These sophisticated machines work by agitating grape clusters in such a way that the fruit falls from the stems, which are thrown off as refuse, and then drop into a crushing mechanism which quickly smashes the fruit, bursting the skin and releasing some of the juice. This is where most white wines and red wines diverge, however. 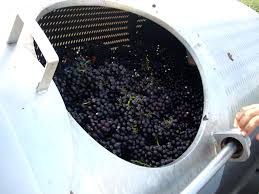 White wines are most often immediately separated from their skins (as skins add tannin and bitterness to the party) by pressing the fruit in a press of some sort, like a bladder press. By filling the bladder in the middle of the press, the remaining juice within the grapes is extracted and is collected for fermentation. Red wines, on the other hand, will often proceed to fermentation while the skins stay in the must (a name for grapes after being crushed). This is done because tannins in red grapes are often seen as adding structure to the wine, and thus leaving the skins in during fermentation would aid in this. Mostly, however, this is done for color. Many are surprised to learn that red grapes, for the most part, don’t produce red juice. Often the juice is white, or slightly pink (which is what most rosés are), and the deep red/purple in the wine is actually a product of anthocyanins within the grape skins that are extracted after leaving the juice in with the skins.

Some winemakers will ferment the whole must together before pressing, others will let the juice sit with the skins before adding yeast, but it all ultimately results in the same red wine. Going back to rosé wine, the traditional method for making this is to use red grapes, but process them in the white wine method, meaning the skin contact is kept to a minimum. By and large, the more skin contact the juice has, the more color is extracted.

When one is ready to begin fermentation, yeast of the Saccharomyces cerevisiae variety are woken up from their slumber with a quick priming, and then are added to the wine along with potassium metabisulfite (a preservative) and sometimes a few other things. This fermentation mixture, in small batches, is added to a carboy with an airlock to release the carbon dioxide bubbles safely, but big operations will do this differently, with large steel fermentation tanks.

Yeast begin the fermentation by consuming sugar (mostly) and giving off carbon dioxide and ethyl alcohol. As long as the yeast remain healthy, they will continue this process until either the food (sugar) runs out or they have created so much alcohol, they kill themselves. Either way, the yeast must sacrifice themselves for our wine to be made. *sheds tear* Once the wine has been fermented to the maker’s liking, the wine is racked (a term used to refer to the act of “pouring off” and separating the wine from the yeast) into a clean storage container.

When most people think of wine being stored, images are conjured up or halls lined with oak barrels, but this isn’t true of roughly half of wine produced. Oak barrels add various characters to wine, varying from cinnamon and chocolate to coconut and vanilla. These often will overpower the more delicate nature of white wines, however, and are foregone. Most reds are able to handle the oak, though, and are frequently stored for months in oak barrels to adopt these additional flavors. Excepting chardonnay, practically all whites ferment in steel or cement tanks and never see a lick of oak. After fermentation they often will quickly be bottled with as little time being stored as possible.

One other step often proceeds bottling for these wines, however, and that is the process of cold stabilization. To cold stabilize a wine, it is stored at a cold temperature (~0° C) for about a month. During this time, crystals of tartaric acid will form on the inside of the storage vessel, and were this wine not cold stabilized, these crystals would form in the bottle on cooling and are often seen as undesirable. This time can also be used as a stage for adding fining agents to the wine, like bentonite, in order to pull proteins and other matter that makes the wine cloudy to the bottom along with the crystals. After this period, the wine is again racked, and is ready to be put through filters to remove any remaining cloudiness, after which the wine may go straight to the bottle.

This was an extremely simplified version of the production of wine, but I hope you found it useful. Maybe I’ll write again about this subject, so look out for possible future tips on how to read labels, a breakdown of wine regions in the world, and much more. Regardless of how you feel about wine, I implore you to seek out a bottle (if you are of age in your country) and truly try and unwrap what it is. Swirl it in the glass, talk about what you smell, carefully taste. Wine is supposed to be enjoyed and talked about, that’s what makes it so special. So cheers to you all this Christmas, and may you all have safe travel and fun with family and friends!