RuneLabs: Is the End Nigh?

From the onset, RuneLabs worried me. I thought it may be one step too far for Jagex and that it would fall flat on its face within the first year. Unfortunately, despite my warming up to the system, my latter assertion has somewhat come true. Well, at least in the eyes of Jagex. If you haven’t seen this forum post yet by Mod Kelpie or the poll that went along with it, the mods that helped create RuneLabs are now second-guessing the idea as a whole and are thinking about either drastically changing it, or removing the feature entirely.

So why the big change of heart, now only 8 months into RuneLabs existing? We’ve only really seen a couple of the ideas fully produced and released, anyhow. What happened to this being the way of the future? Well, in the aforementioned forum post, Mod Kelpie brings to light that only 4% of users have submitted an idea and only 10% are actually voting to support RuneLabs ideas before they are put into in-game polls. Also, results from a recent survey that around 3000 players completed are adding to the doubts. For example, only 26.63% of players thought ideas in Runelabs were easily found, only 19% believe the best idea is winning in the polls, and nearly 20% supported the removal of Runelabs (and another 20% who didn’t mind either way). 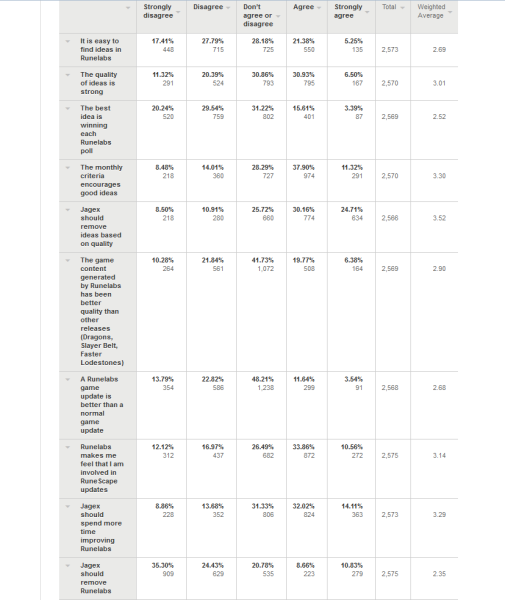 This all may seem a bit disheartening, but I honestly feel that with a bit of spit and polish, RuneLabs could be made successful and improved upon greatly. First, let’s look at the fact that only 4% are submitting ideas and 10% are supporting. The first number I honestly don’t feel should cause any concern. Let’s face it, MOST people don’t have good ideas. I honestly haven’t submitted anything because I know I’m not that creative, but I know that there are hundreds at least in the Runescape community that are. Anything from the top 1-5% should be making the ideas. Any greater a percentage would hurt the quality of the median suggestion, and would also make it even harder to sift through the already intimidating mass of ideas to find the diamonds in the rough. However, the number that does cause some doubts in my mind is the fact that only 10% of the player base sees it as a necessary thing to go onto the RuneLabs site and support their favorite ideas. This can be evidenced in the fact that the highest RuneLabs suggestion often doesn’t end up winning the in-game poll, and it needs to be remedied. Of all the possibilities I’ve heard of getting more players to vote, the idea of somehow moving RuneLabs into the main game as the polling system is seems by far the most realistic. A majority of gamers are lazy and won’t put in the effort to go to the Runescape website, click on RuneLabs, log in, and support an idea they like. That’s too much work, I guess. So, instead, put it right in front of them. If that doesn’t work, nothing will. Doing so should solve both the low involvement statistic and the fact that only 19% believe the best ideas are actually winning.

More difficult would be solving that fact that a majority of players find it difficult to actually find ideas on RuneLabs. A strawpoll was put out during a livestream about 2-3 weeks ago (TL;DW here) asking if players would suggest clearing the archive of ideas every month to start with a clean slate or not, and the result of the poll showed that at least those players supported the clean sweep idea. That alone should cut down on old ideas, but what about bad ideas? And not the ideas that are flimsy, or just plain sad, but why can’t the spam and “remove EOC” ideas be taken off immediately? I’m not a programmer, and I don’t work for Jagex, but I would suggest some sort of moderation be placed over the ideas of RuneLabs to make it so that only legitimate concepts make it to the support phase. With all the old ideas and the spam ideas gone, Jagex should be able to come up with some way of making a “Featured” section to give light to RuneLabs ideas with less supports. Yes, most of this process will take more manpower and constant moderating, but it may be needed to improve a system that’s already quite faulty.

No numbers have been collected on players’ feelings regarding my last idea for improving RuneLabs, but I feel it’s necessary if Jagex truly wants players to come up with quality content. What I would suggest is that Jagex, at RuneFest every year or at the beginning of each year, give an outline for each month’s idea guidelines (if they choose to continue down that path). By announcing the criteria right as ideas are open to be submitted (as they are now) and only giving players a couple weeks to get everything sorted and submitted, it inherently rushes ideas and makes it so some people can’t fully develop larger updates. If the requirements for each month were announced well before anyone could submit ideas, the good ideas would improve, and the great ideas would have more time to be polished. This should also solve the skew in the votes that occurs when some ideas get more votes simply because they’ve been around longer.

Through all of this, I have not argued as to the merits of RuneLabs as superior or inferior to official Jagex updates, and neither will I. This was merely a group of suggestions to patch up the ship we’re currently sailing. Yes, RuneLabs is extremely flawed in its current state, but with time and effort on the part of Jagex, the system could achieve its full potential.