With RuneFest having just wrapped up, now is a great time to be writing articles because of the sheer volume of topics to choose from. Even with so many options, it’s hard to distract oneself from the BIG reveal session that left many scratching their heads or huffing “Ugh…” in disappointment. Although it currently has little effect on the main game, it’s the elephant in the room. I just HAVE to write about Chronicle: Runescape Legends – and not only of the game’s unveiling, but the first reactions that rippled through the forums and social media sites that had people dubbing it “Runescape: Hearthstone” due to its apparent similarities to Blizzard’s World of Warcraft themed digital card game. Wait – Chronicle: Runescape Legends vs. Hearthstone: Heroes of Warcraft? From the names alone, they sure sound similar. But what else do they have in common? Having little knowledge of Hearthstone but being very familiar with other physical card games, I’ve done some research and watched many battles on Youtube to get a feel for the game. I gotta say, it seems pretty fun. I am in no way now an expert, but I think I have enough information to write a fair comparison.

For anyone who missed the news, Chronicle is a new digital card game being created by Jagex where the player builds a deck around a hero from the Runescape universe who then ventures through a quest-like series of events and eventually battles their opponent’s hero. Through the quest’s events, controlled by the cards in the deck, they gain buffs or counter the opposing hero, and earn gold but also take damage in battle with famous RS monsters. At the end of the round the heroes fight to the death with all their remaining health and effects from the quest. If you aren’t familiar with Hearthstone, it is an existing digital card game where you play as a hero from a certain class of the Warcraft universe. You construct a deck of cards that range from minions, abilities, and effects to directly battle your opponent in a turn based classic-style card game. You can attack your opponent with your hero directly and with minions or special effects from cards until one of you are out of health points. On paper, their basic concept surely sound similar, but how the game plays out is staunchly different. Both draw from an existing game’s story and characters to create a spin-off concept. Both don’t take a whole lot of time to play – 10 minute games are common for HS and were said to be the case at Runefest for Chronicle. While both are stand-alone games, both seem to draw from the bigger game’s player base and as a safe and minimal production intensive way to make the company additional revenue.

At first glance the games look and feel very similar. I saw Chronicle’s interface before Hearthstone’s, but to say that Jagex didn’t AT LEAST get inspiration from Blizzard’s game is intellectually insulting. Both are played within a mechanical book-like interface on a table with a colored tapestry (Chronicle is red, Hearthstone is blue). The cards are laid out nearly identically with the same colors and simplistic symbols. There are glaring shared gameplay mechanics such as health for heroes as well as cards, a “cost” to use a card, shields that absorb attack hits to save from losing health. Both games are played with 30 card decks, heroes start with 30 health, and are set on a themed board resembling an area from their parent game. It’s pretty dang clear that Chronicle drew at least some concepts from Hearthstone. Now, I’ll give it that Chronicle is still in a rudimentary stage and has to have familiar controls of a pre-existing game in the same style, but come on now. If you had no idea what either game was and was just shown both game’s cards to be able to tell them apart. 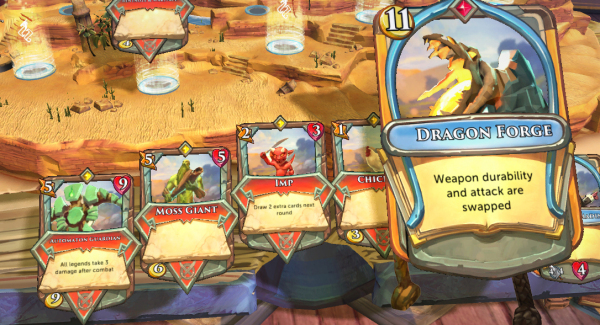 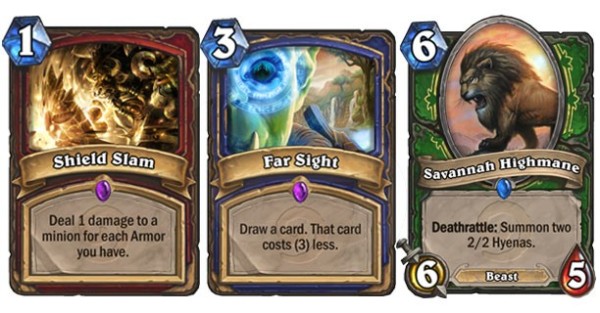 Despite similar looks, the actual gameplay is pretty different. Hearthstone like I said is more classic card game in play style. If you have played Magic or Pokémon or Yugioh, you would feel right at home with Hearthstone. You have monsters that fight and take damage until they die. Along with that you have energy costs in order to play a card from your hand. Each turn the energy you are given is increased, allowing you to play stronger cards. Cards and your selected hero have a set attack strength that can then be modified by buffs on certain cards. For example, minions with a battlecry give a certain effect when they are in the field of play. Each minion on the field gets to attack per turn. While most minions have to wait a turn before they can attack, those with the Charge ability are able to attack as soon as they are put into play.  Other cards simply support your fighters or straight up damage your opponent. Hearthstone is fairly balanced, with no real hero/deck type better than all the others. Due to this the game has a base of loyal players and is played competitively by pro players with hefty cash payouts.

Chronicle on the other hand, at least in its current form (and to my understanding), is played with similar cards but in a different format. Matches in Chronicle are more linear, where you use your deck to create a quest for your hero to play through. Your quest route has cards slots that can either be filled with monsters or adventure cards. Rather than energy governing play, Chronicle uses gold that is then used to purchase upgrades and buffs to the hero. You sacrifice health by fighting monsters along the route in order to use the loot to buy the upgrades in hopes that it will pay off when you fight your opponent at the end of the round. You play three rounds, the best two out of three wins the match.

With Chronicle being only 13 weeks old when it was revealed at Runefest, it is quite an impressive display for a game that’s only in alpha. There’s also plenty of time for even complete reworks to take place, so that may very well make the entire comparison a moot point. Yes, after a quick look they look the same and if you weren’t careful you might confuse one for the other, but they are the same genre of game, after all. Although their concept, design, and even origin may be the same, the gameplay style are quite different, with Hearthstone being a classic battle to the death whereas Chronicle wants to be a build-your-own quest with a fight at the end. With a little more polish and finalizing, I think we’ll see the two differentiate from each other and the comparison between the two not so obvious. And even so, if they kept similar elements, is that really a bad thing? Hearthstone is very popular and a successful branch of the WoW universe, so can we blame Jagex from wanting to follow Blizzard’s lead? I know this wasn’t what most Runefest attendees were wanting in the big reveal, but if it still benefits the main game can we really complain?