Lately I haven’t been on Runescape a whole lot, but that doesn’t keep me from staying up to date with news posts. One of the recent ones is tinged with a great many mysteries.

Mod MMG’s Myths and Misconceptions is the one which I am referring to.

Which part? Well, most of it. I won’t dispute the gender and age statistics because for one I have no gauge and for two it doesn’t have any real bearing on the game.

Regarding the ‘ ‘Average’ player’ statistics

First off let me remind us all that RS in its first incarnation was created and launched in 2001. Runescape 2, known as ‘RuneScape’, was launched in 2004. That makes the oldest accounts ~13 years old as of this year. If the average account is 5 years old then that means the same amount of people registered from 2004-2009 as from 2009-current. This means two things:
1) On average, 2009 was the year Runescape was most popular and had the most effective reach.
2) There are not very many new players coming into the game today.

The average player having a total level of 1614 means one of two things:
1) Experience is too easy to get. Ideally your playerbase is going to be split over all ranges, with most being in the middle and some on the top and some on the bottom. The average total should ideally be around 1300.
2) There are few new players entering the game. If more players were entering the game then there would be more entries with 35-200 level which would negate those with 2000+ total.

Interestingly, the max level of an F2P is 1614. I don’t think this has any bearing here, but I thought it was an interesting fact.

Highest skills being Woodcutting and Strength… this is probably due to Strength being the defacto skill to train when doing melee since Runescape’s inception. Nowadays it has little to no bearing on actual damage in combat. Woodcutting seems a bit odd. There are many skills more popular than woodcutting. There are only two explanations I see for this:
1) Ivy allows insane woodcutting training and is very easy to afk so it is an ‘Easy 99’.
2) Woodcutting bots are being taken into this calculation. Chopping Yews used to be a huge market for gold farmers.

Lowest in Farming and Divination, nothing to talk about here. Both of those are too annoying for the average person to bother with and give little in meaningful returns to the average player.

Now this last one here is very interesting. Yes, I would agree that probably only about 1% of players have over 1 billion GP. However there is the problem, over 1. They only counted to a threshold. I bet there are quite a large amount with less than 1 billion but more than 500m. There’s probably even more that are less than 500m but more than 100m. Anything over 100m is rich to the average player. I would like to see a chart that shows player GP value compared to account age with integers every 50m and 6 months(or perhaps every 100m).

I can’t say anything about this. I think most people agree that for the most part bots and goldfarmers have been drastically reduced. There will always be cheaters, but this has handled the majority of them.

According to paragraph 4, this means years ago when there were 200k+ players on at one time, only 16.6k of those were real players. That seems….slightly unrealistic.

One thing I’d like to mentioned is that as I write this there are 16,491 players on Old School and 37,184 on EOC, for a total of 53,675. This is still a solid 30% playing Old School, which is more than most people expected at its release a year ago. As I speculated, OSRS holds a consistent third of the population at any given time.
I can’t remember which RSBandB member runs these graphs but I am thankful he does. According to that, Runescape’s population has not changed over the past 3 months.

8 Months ago I stated how many players were on at the writing of one of my articles.
Quote:
In comparison, right now at 6pm EST there are 54,563 players on.
15,982(29%) of those players are playing Old School Runescape.
That means only 38,581 people are playing Current Runescape.

A modern version of the same exact statistics:
Right now at 6:45pm EST there are 53,675 players on.
16,491(30%) of those players are playing Old School Runescape.
That means only 37,184 people are playing Current Runescape.

In the past 8 months the average Runescape population has not changed. THIS is not good. While it means Runescape is not losing population, it also means Runescape is not gaining population.
It also proves this statement false:
Net result? Concurrent players is as high over recent months as it was a year prior, with more players returning to RuneScape and thousands of new players joining our amazing community than at any time in the last year. We’ve even seen counter seasonal positive growth the past quarter.

I don’t have a record of players online last year on this exact day, but I do have a record from March 31st. There were 105,582 total online with 55,414 on EOC and 50,168 on OSRS. Now I do have to note this was only a month after the release of OSRS, hence the large influx of players.

And lastly the stat images

I don’t think the player geographics breakdown is accurate, but I don’t really have anything to dispute it. It just doesn’t seem right.

My main thing here is this: 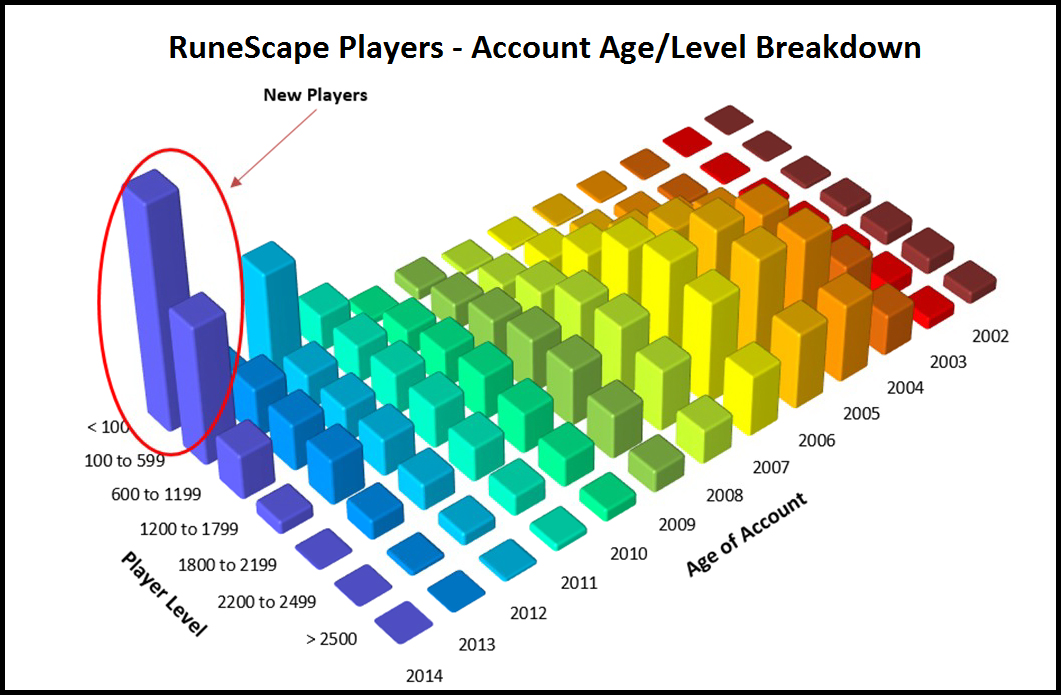 Without knowing actual numbers I can’t take this graph seriously. They’re saying in just 3 months of 2014 they have nearly equaled a third of the accounts between 2004-2006. This would seem extremely unlikely.

One of my biggest concerns with all the stats shown in this post is what pool they are based on. Is it all active players? Or all Runescape accounts? If it is all Runescape accounts then it is grossly inaccurate because Jagex doesn’t delete bots, they only ban them. This means all those inactive and illegitimate bot accounts are being counted. I hope in the future they specify what pool they are judging by.

On a slightly different tone, I would love to see a general automated statistics post or graph that we could look at every 3-6 months.

What do you think?