No Beta Way to Fix Combat

No Beta Way to Fix Combat

So I was just about ready to push out my article with the disappointments with the World Event 2’s ending when Jagex dropped the news that we are having yet another beta for…combat? Stop the presses because this one has me worked up.

As we inch ever closer to the second anniversary of the Evolution of Combat’s announcement we are left wondering what ground we have gained. With today’s reveal of special attacks coming back, we are basically back to the only notable change being adrenaline and abilities. Evolution by definition is change over time, but when flip flopping on decisions is happening on a monthly basis and we have to wait over a year for the slayer helmet to be fixed, we can officially say even Jagex doesn’t know what they want to do or even what to change with combat. If Darwin’s findings of survival of the fittest are any indication of how evolution works, this combat evolution is going the way of the dodo.

Why is it so hard to get a combat system that works and makes sense? Well, when you have a 10 year old game that has had combat working the same way since the beginning, you have a lot of kinks and a lot of things to think about when you go to change it. You can’t just throw in abilities and expect everything to be fine. I think we all understand that some things take time and we’d be finding things to improve a long time afterwards. But the actual problem is Jagex’s inability to settle on how they want combat to work and their attitude that it can all be settled in a beta. A beta here just doesn’t make sense. An idea either works or it doesn’t. This mentality of “tweak week after week till it’s right” just makes the game unstable. I genuinely feel that if they sat down for a week of meeting sessions and examined combat as a whole, we could get things settled much faster and in a way with far less tweaking needed.

First things first, Jagex is really trying to overcomplicate everything about combat when it really needs to just be simplified. Along the way we were given three classes of armors – Power, Hybrid, Tank gear. My understanding is that Power is for slaying/PvP, Hybrid for killing in general/questing, and Tank for PvM. It really can be that simple. Everything else, and there’s a lot of stuff that falls here, is worthless and clutter. Yes, give us things like a Helm of Neitiznot that gives a little bonus to substitute a hybrid helm for, but other than the one-off special slayer drop or quest item, let that be how things work.

When you sit down to decide what’s what, you map it out. You make your level tiers with all your armors for each combat method. Make Rune (and the equivalent mage and range) armor your anchor and pick a level for it. 50? Great. Now make every piece of armor (along with staves and weapons, but keep it simple for now) into one of our three classes: Power, Hybrid, and Tank. Power armor has abilities and fill set bonuses that sacrifices defense, Hybrid has middle of the road stats but is a constant non-degradable armor, and Tank has the best defense for that level that can either degrade (if cheap) or not (more expensive). 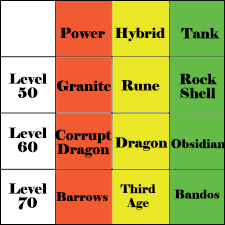 For example, let’s look at level 70 melee armor, which is Bandos, Barrorws, and let’s make Third Age up here, too (currently 65). Bandos is your obvious tank gear – doesn’t degrade, has superior defense at this level. Barrows becomes Power armor, with full special abilities on weapons and set bonus while sacrificing defense. Third Age becomes Hybrid, give it some prayer bonus or other bonus to make it worth the price, but still weaker than Bandos in defense. Done! Move on to the next level tier.

If this was how armor and weapons worked it would make figuring out what you need so much more simple. No more wearing a Neitz helm out of habit months after it was nerfed or comparing this level 70 armor versus this level 68 armor vs this level 75 armor. It’s all spelled out and in a predictable manner. A bonus with classifying like this is that you’ll be able to see gaps where a class of item is missing. To stick to my example, we could easily replace/share the Level 70 Hybrid slot with Third Age and another armor that is more common but with less of a bonus than Third Age. You could move obsidian up or fill it with something from the inventor skill. That’s the glory of it – it gives you an idea of what’s missing or where something needs be developed to bring balance.

I’m not trying to give Jagex grief about making changes. Obviously changes inspired by players are normally always good, but this doesn’t call for a beta. Figure out how to make it work and just release it. Betas, although separate, can wreak havoc on the economy of the live game. We already have people trying to capitalize on the speculated changes because everything that used to have a special ability and was now worthless at the moment is being merched to hell. This is why this needs to be IN HOUSE and done in ONE SWOOP. Yes, continue to tweak it and listen to players to make minor changes, but don’t go flip flopping anymore, because you are starting to really upset people who had an item, tossed it when it was crap, and now have to buy it back for inflated prices because we all knew the change was coming. Multiply that by several items, and that’s millions we are having to shell out just to have gear that we had before EoC 1.0.

Funny thing is, armor and weapons weren’t even the real issues with combat. My Forrest Gump familiars and how I interact with them, not having a HUD for status effects and timers for everything that expires, and not being able to click through the over-head tags on enemies ARE issues. The simplification and watering down of momentum is a whole different article entirely, so don’t get me started on that. In a game where people consistently say things are getting easier, the one thing that remains hard that shouldn’t be is how to whack things till they die. The most basic and common thing that everyone does at some point in Runescape is pointlessly confusing and nonsensical. Now is not the time to run a beta to see if bringing back something everyone liked is worthwhile. Stop tip-toeing around to try to make everyone happy and just fix it!