In the Evolution of Combat, there are many things that you can do to increase the volume of damage you do to your opponents.  In this article, I will be discussing my favorite methods of increasing damage output, ranging from which gear you use, to how you use abilities.

I. Choosing the right equipment

Leaving weapons aside, there are many pieces of equipment that can increase your damage output, with the majority of these being power armour.   Power armour increases the amount of base damage you do by 10% for a complete armour set, at the cost of less defense.  An example of how much defense you lose from using power armour can be seen by looking at a piece of Tectonic armour.  The Tectonic Robe Top is a level 90 piece of power gear and has an armour rating of 500, which is that same as level 85 defensive armour. It is about a 5 level loss in defense for power armour, but you receive a 10% damage boost if you have the rest of the set.  Below is a list of power armours for all combat styles.

The item noted with a * are the items that are in the Nex armour sets, and have a unique damage boost.  Each piece of the set has a damage amount added to your weapon damage.  This is in addition to the 10% damage boost given from the armour being power armour.

Comboing abilities is a method that can be fairly tricky to master, but with practice can add to your damage output in great ways.  An ability combo is where you quickly chain together abilities that work well with each other.  This results in very fast transitions between abilities, and for some combos, momentarily having 2 abilities active at the same time.  A simple example for an ability combo can be shown with the ability “Overpower”.  Overpower is an ability that has a short animation before the damage hits your opponent.  During that animation, your ability cooldown for using any other ability is decreasing, even before the damage from Overpower hits your opponent. This means that with a fast and precise timing of a basic ability after Overpower, you can have 2 very rapid hits.  My favorite basic ability to use in situations like this is Sever, because it is a very reliable ability.  It is very accurate, and usually hits a fairly large number.  The gist of this type of ability combo is to use a basic ability at the right timing after an ability that has an extended animation to it.  If you are precise enough with the timing of the basic, you can actually have both of the abilities hit at the same time, and your opponent will take 2 hits at once.  Here is a basic example of this type of combo by chaining Wild Magic with Impact, activating impact during the pause between the 2 hits of wild magic.

This next tactic is tricky to master, because it requires extremely precise timing, but if you can get it right, you will have 2 abilities active at the same time for a few hits.  The only 2 abilities that I can currently get this to work with are Assault and Destroy.  Assault and Destroy both do 4 hits of damage each, and if Destroy is used that the correct time while Assault is still active, the first hits of Destroy will happen while the final hits of Assault is active.  So lets pretend “A” represents a hit of Assault, “D” represents a hit of Destroy, and “_” represents time where no ability is happening.  Using Destroy after Assault is finished would look like A_A_A_A_D_D_D_D, but if you can get this successfully time the first attack of destroy to hit exactly between the third and fourth hit of Assault, it will look something like  A_A_ADAD_D_D.  Perfecting this just takes practice, and my advice is to press the button for Destroy the instant that you see the third hit of Assault, if you can successfully do that, you have successfully used 2 abilities at the same time.  Below is an example of this combination, with a basic ability at the end of Destroy, to have a quick final hit.   Additionally, if you can get up to about 70% adrenaline fast enough after using the ultimate ability “Berserk”, you can use this combo with double the damage as usual, making this combination deadly.

Finally, by combining all of these strategies:  damage over time, Assault+Destroy combo, finished with a chaining basic, you can do this:

III.  Other things that boost damage.

As a few final tips, I am going to go over a few other things that increase your damage output.  The level 66 ability “Vulnerability” on the standard spellbook increases the damage taken by your opponent by 10% for 1 minute, which is particularly useful when maging, as it is a spell which is unreliable when ranging or meleeing.  The defensive ability “Revenge” lasts 20 seconds, and during that time, any attack you get hit with increases your damage by 10%, stacking up to 100% bonus damage.   Finally, if you have completed the quest “Ritual of the Mahjarrat.” you can visit the Glacor cave to receive a 3 hour damage boost.  The map below shows the range in which the damage bonus is active. 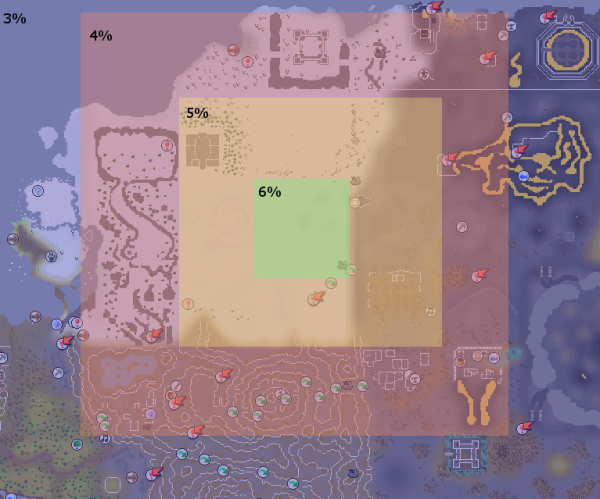 Credit of this picture goes to Spineweilder from RSWiki.