Evolution of Combat: How balanced is it?

Recently, Jagex has made some changes to the EoC to make your skill levels have more of an effect on your damage output, changing the effect of prayer and potions.  The tests showed in this article reflect the EoC before these changes, in a future article, I will compare these tests before and after the EoC changes.

However, there are other parts of combat that require balancing. Balance between different weapon setups on the same tier, how much you gain from having higher combat skills, the effect of prayer and potions, and the effect of speed on ability damage. In this article, I am going to be putting these parts of the Evolution of Combat to the test to see what is balanced and what is not. I will be comparing weapon layouts under different variables that can determine what is balanced and what is not. All of these weapons are on the level 80 tier, and to test them I will be using the basic damage over time ability of each respective class. These three abilities are Dismember, Fragmentation Shot, and Combust. They all do a fixed amount of damage based on the weapon you are using, making them a great way to test the effects of different variables.

To test the effect of your combat stats, I will be comparing dual wielding Chaotic Rapiers at level 80, 99, and 116 strength. This will show how much you gain from gaining levels above what is required for the weapon, and how beneficial the use of potions is.

As you can see from the trials, the amount of damage gained by having higher combat stats is very small. The difference in damage from level 80 and level 99 strength is only 6 life points of damage. When you are hitting in the 1000s or higher in standard combat, this is a difference that is not even noticeable. It is the same way for boosting over your base level. This means a person with 80 strength has nearly the same damage output as a person that is 99 strength, as long as they have the same weapon. Until there is a weapon that requires a 99 combat skill, there is no point in getting 99. This is a major problem with the combat system. It encourages players to only level their skills to the minimum they need, and gives no incentive of leveling beyond what is needed to use their weapon of choice.

Even though the Evolution of Combat is still being tweaked 5 months after it was released, it is still far from being balanced.

When the Evolution of Combat was released, using a Two Handed weapon was the best way to increase damage output. Using a Chaotic Maul would be significantly better than using dual Chaotic Rapiers, because dual wielding only took main hand damage into account, aside from two unique abilities. A few weeks back, a game update made it so dual wielding took into account your off-hand weapon when using abilities. To verify that dual wield and two handed are balanced now, I am going to compare using a Virtus wand and Virtus Book to a Chaotic Staff, using air surge as the spell.

You can clearly see from the picture that the damage with the wand and book was exactly the same as it was with the staff. This proves that dual wield and two handed setups are both balanced.

For this situation I am going to disprove a common misconception that many people have, and that has to do with weapon speed. Many people think that speed has no effect when using abilities because the cool-down time between activating abilities is always the same. With this in mind, people tend to choose a weapon that has the highest damage rating, completely ignoring its speed. But what about weapons that have a higher speed and lower damage rating, does this make them obsolete? To find out, I will be comparing the Zaryte Bow (faster, lower damage) to the Royal Crossbow (slower, higher damage). 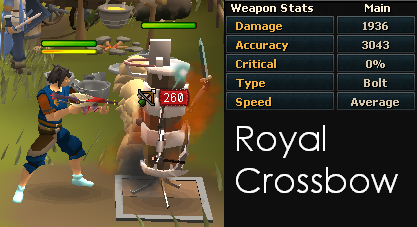 As you can see from the picture, the two weapons did nearly the same amount of damage. The reason for this is that weapon speed is accounted for in the calculation of ability damage. Weapons that have a higher speed have their damage increased when using abilities and weapons with a slower speed have their damage decreased when using abilities. Even though the Royal Crossbow has a higher damage rating than the Zaryte Bow, the two weapons hit nearly the same. This shows that the effect of speed is balanced, providing no advantage to slower weapons when only using abilities.

As shown by the pictures, the effect of offensive prayers does not do anything. The damage was the same with the prayer on as it was with it off. Even though the tooltip for Turmoil says that it increases strength, there was no damage increase, meaning it is not helpful for increasing damage. With this being the case, what is the purpose of using offensive prayers? This is clearly not correctly balanced.

Monster weakness became a huge part of combat with the Evolution of Combat. But to what extent does it provide benefits that make it worth using the correct style. To test this, I will compare fighting an opponent that is weak to my magical air surge attacks, and fighting an opponent with no weakness.

The effect of monster weakness exists but is very slight. There was an increase in damage against the dummy weak to air spells, but I would not say it is enough to make me use a monster’s weakness in combat. Keep in mind that this is only damage magnitude. From my own personal experience, I have found that monster weaknesses affect accuracy more than damage, but sadly I cannot show this in a picture. As long as a weapon has a higher tier than the opponent’s defense level, the gain of using the correct combat style is nothing significant. This is something that could use some work, but is not completely unbalanced.

From these tests, we have learned that there are some significantly unbalanced parts of the Evolution of Combat. The most notable are the effect of Prayers and the effect of combat stats. Right now in RuneScape, a player that is level 80 strength with level 1 prayer can have the same damage output as one who has 99 strength and 95 Prayer, given that they are using the same weapon tier. There is no reason to get extras for combat such as Turmoil and Overloads with the current state of the game, because the benefits of them are so tiny that they might as well not exist. On the other hand, Dual Wield is now balanced with Two Handed weapons, weapon speed is balanced, and the effect of monster weaknesses could use some work, but is mostly balanced.

There is a large amount of balancing that needs to be done to this combat system. The Evolution of Combat is far from being perfectly balanced.

Next month, we will do some testing on the Evolution of Combat after the changes that  were introduced recently