Those of you who know me are probably well aware of the fact that I dislike pures. They unbalance PVP game mechanics and ultimately unbalance the game entirely because their small, but quite vocal, voice is heard more prominently over the larger, but less vocal, voice of normal players. This makes Jagex change the game to be playable by unbalanced pures which more times than not ruins it or makes it harder for normal players.

The point of this article, however, is not to bash pures. Instead it is about a different kind of pure, a Slayer pure. You’ve heard of PKer pures, strength pures, defence pures, range pures, mage pures, skiller pures, and even summoning pures. Unlike those, which entirely restrict themselves from doing certain things, my slayer pure focuses on leveling slayer over other skills.

Now obviously there’s two ways of doing that, killing things, or using experience granting things such as lamps. I don’t like the idea of just using lamps and the like so my slayer pure levels his skills by doing tasks. I did get some experience to start by doing The Blood Pact and the Restless Ghost, which gave combat and prayer experience respectively. I received Slayer experience from Gunnar’s Ground, Myths of the White Lands, and Swept Away, but aside from that it has all been from doing tasks.

I decked him out with Iron armor and an Iron longsword since that’s the best he could wear. I chose the longsword because it can give controlled experience. This way he’ll level his melee skills evenly. I use a normal shortbow on rapid for ranging, and a staff for magic. I don’t use longrange or defensive casting because that would give me extra defense experience.

My first task, which was of course from Turael in Burthorpe, was for 33 goblins. I chose to fight the ones in the Goblin Village because they gave more slayer experience. I used combat potions to increase my attack and strength levels by 3 to bring them to 4. That made fighting the goblins much easier (though still a decent challenge). Since Combat potions cost 25 gp for 3 doses, it is a very efficient way to boost your stats(they give 10% +3 levels).

It was fun to gain levels so quickly. I hadn’t leveled that fast in over 7 years. I made level 4 Attack, strength, and defence as well as level 12 constitution on that first task. 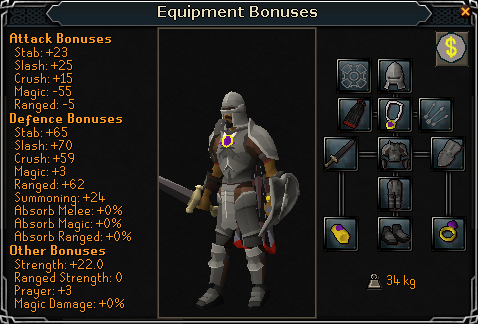 Here is a picture of my starting gear. Not much out of the ordinary except an Obsidian cape, Amulet of Glory(4), Combat Bracelet(4), and Ring of Wealth(4). These items really are not very hard for a low level to get, costing roughly 30k each. The bonuses provided by them however are tremendous at level 1. Those four items (three really because the ring doesn’t actually give combat stats) more than triple the offensive stats, are nearly half the defensive stats, and give more than double the strength bonus of a normal set of Iron armor. That’s a pretty significant increase when you think about it.

You can use the Equipment Calculator to see the exact differences.

Before long I was able to wield steel, then black, then mithril. After mithril the levels started to slow a little. My Slayer kept up well with my melee skills, being always 1-2 levels above until I reached level 30 attack, strength, defence. Then it slowed and now, at 42 attack, strength, and defence I have level 40 slayer.

Now I wear the following: 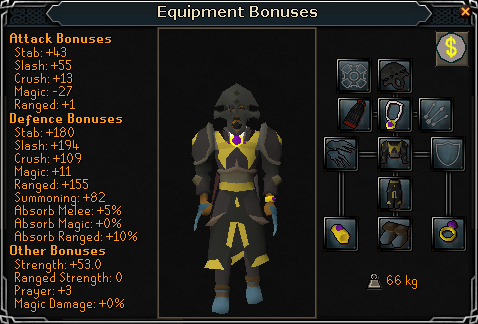 Surprisingly, the Elite Black armor costs only about 90k for the body and legs, and another 25k if you want the helm even though it gives slightly better defense than Runite (yes, even against the rune platebody). I didn’t know this before and I thought I would be stuck with the rune chainbody until I completed Dragon Slayer. With this Elite Black armour, not only do I have good stats without having to do a quest, but it’s also cheap and looks good. Nice combination there 😉

You might have noticed Rune claws instead of a longsword. This is another thing I did not know before: Claws have a controlled style. They also attack with the speed of a dagger. So I’m able to do good damage at a decent speed, while also having a nifty little special attack. The downside versus the longsword is that the claws do not allow a shield whereas a longsword does. The longsword also gives slightly higher strength bonus. It’s an interesting trade off. Ideally I would use a Rune Hasta(p++) because it attacks at the speed of a longsword, allows the use of a shield, and can fight controlled in any combat type.

Once I reach 60s all around I’m probably going to invest in some dragon claws, chain body, and platelegs. Then I’ll really be rocking it.

I started my Slayer pure, SkyrateStorm, in mid December of last year. I made him a member with the 6 months for the price of 4 deal. I have roughly 3 months left and hope to get him to at least 60 in combat stats and slayer. The goal of him was to see how well a character could do if they did slayer from square one. So far he’s been quite fun. Granted, he has not gotten very many good drops yet but that’s because he has not been assigned many slayer monsters yet. I imagine he’ll get some good drops before his time is up. I don’t know if I’ll make him member again after the six months runs out. I might if they do another special deal sometime.