Free for all, but not all for free

One thing that has puzzled me and always gotten on my nerves is the fact that Jagex touts RuneScape as “100% Free”. It is 100% free, but only to a point. That point is roughly 12.5% of Gielinor. 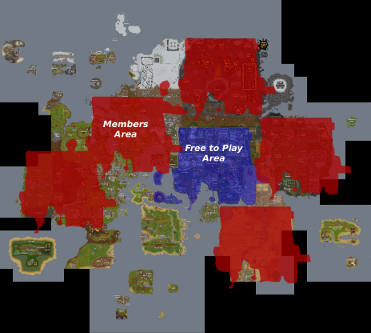 You can see 6 units here, 1 F2P and 5 P2P. We can fairly easily count all that unmeasured space into being roughly one more unit. When you add the remainder from that with the many member’s dungeons you get about another unit, for a total of 8, 1 Free, 7 Member. I count the wilderness as Members because there isn’t much for a F2P to do in it. If you want to be really strict we can count it neutral in which case the count is 1:6 for a total of 7. F2P still only gets 14.28%.

Why is this significant? For a game to be considered ‘Free’ (at least in my book) at least 50% of the content must be accessible by free players. That is clearly not the case in RuneScape. 14.3% free and 85.7% pay to play?

Now, I know what you’re thinking, “RuneScape has to make their money somehow!” True! They do! But do they really have to be so stingy to their free players? They force them to have advertisements while playing less than 15% of the game. When you look at other games that are free with a paid part that Jagex is trying to compete with you notice two things pretty quickly; The free versions are usually pretty large, and the free versions rarely have advertisements.

Take Lord of the Rings Online for example. You can start the game for free, earn turbine points while advancing your character, and later use the points you earned for free to buy content that is normally considered paid. BUT, even before (or if you don’t want to) buy anything with the free points you earned, you can still travel a good 70% of the world, train your crafting skills to over 70% of the max, and reach the max base level, which is 55. That’s still 70% of the max patched level of 75. All of this can be done, for free, without ever seeing an advertisement.

Now, I’m not trying to convince everyone to switch games (though if you’re still F2P you might consider the LOTRO style F2P instead). LOTRO and RuneScape are different games, despite Jagex trying to say otherwise. Runescape is a great game (some of you probably thought I would never say that), but Jagex could make RuneScape better and much more popular by increasing the free area.

I’m sure some of y’all are remembering Jagex’s claims of being the “Largest free to play game” right about now. But let me remind you of this: Those claims were made when bots were still rampant. Before the bot nuking there were always 100k accounts on, usually 160k. Now, at 4pm EST there are 83,496 players on. I just looked over the list of worlds and the majority of F2P worlds have less than 200 players. The majority of P2P worlds have over 500 players. This says a few things;
1st, that Jagex has a good steady flow of money with most of those 83k players being members (let us remember that 60k x $5 = $300k per month). That’s only how many are on right now, that does not count the weekend warriors and midnight gamers.
2nd, the amount of free players they are actually serving is pretty minimal, with the ratio being 2:5 on average (at this moment).

If the 2:5 ratio is accurate, than that means there is roughly 23.7k free players on right now. Granted, that is a fair bit of people. But not too much compared with the 59.3k members on at the same time.

So, if the majority of players are now members, how is Runescape still the “Largest Free to Play Game”? Well since a lot of the bots were F2P they added lots of free accounts. Jagex rarely, if ever, deletes accounts, they simply ban and reset them. Thus whenever a bot is stopped it’s simply banned, but is still counted as a free player. So if over the course of the Age of Bots Jagex banned 2 million free bots, that would add 2 million free players to their list. That’s quite a hefty amount of free players. Unfortunately, they aren’t players. When asked how many free players they have, Jagex can genuinely say, “We have 3 million free accounts.” However they don’t mention the fact that 2 million of those are banned bots and 500k other of those accounts haven’t logged in for the last 5 years.

Don’t get me wrong, RuneScape is a great game. It has its place. However, that place is not as a free game. When you take a few moments you can easily tell that the unpaid version of RuneScape is not only not free (you must pay via dealing with adverts) but also merely a demo (in the fact that you only get ~15% of the content).

I’ve been playing Runescape for going on 8 years. Over half of that has been as a member. I’ll continue paying $5 a month until Jagex pulls the last straw. I also just signed up a special secondary account with the 6 for the price of 4 Christmas deal.

Moral of the story: RuneScape is one of the best (not ‘The Best’) paid games, but its demo falls way behind others’ free versions.