Interesting title, no? I always seem to come up with (in my eyes) some of the most bizarre titles.

Anyways, this is referring to the RSSE, or RuneScape Stock Exchange. What is it? Well it’s a place to exchange stocks of course! When was it added you ask? November 26th, 2007. Where is it? North-West of Varrock off to the left of the Varrock Castle. I’m sure you’ve seen it, you just haven’t noticed it. It’s quite a grand stock exchange, in fact it’s so grand it’s sometimes just referred to as ‘The Grand Exchange’.

What’s that? That’s its name? Could of fooled me the way people use it like a stock market, trying to sell high and buy low. It’s a pity really that people get deceived into thinking they can make a profit by playing the exchange. True, there are a few rare instances where you can make some decent money but usually that A). Requires money to start and B). Requires you to know what you’re doing. Unfortunately most people have neither, yet still play the market.

I noticed this most recently with the addition of the Vine Whip. Now it in itself hasn’t been all that odd. When it was added it was valued at 25m and now it’s down to 11m – that’s not odd considering it was a disappointment. Had it been a very useful addition it would be at 40m right now.

The thing I noticed about this update actually first started happening 11 days earlier, on the 1st when Jagex released a Behind The Scenes for July. In the Behind the Scenes, as you all know I’m sure, Jagex said they were adding the Whip Vine which could be added to the very popular Abyssal Whip to make it poisoned and give it a better special attack. As soon as players heard that the Abyssal Whips would be getting an update they all thought, “Hey! This means after the update everyone will want to buy an Abyssal Whip! If I buy 5 whips now…the price will double when the demand increases! I’ll be rich!” only problem with that idea was this: Everyone thought that. These thoughts created a demand before the update was even released. Everyone was trying to buy Abyssal Whips so that they could resell them to everyone. Ironic, no? 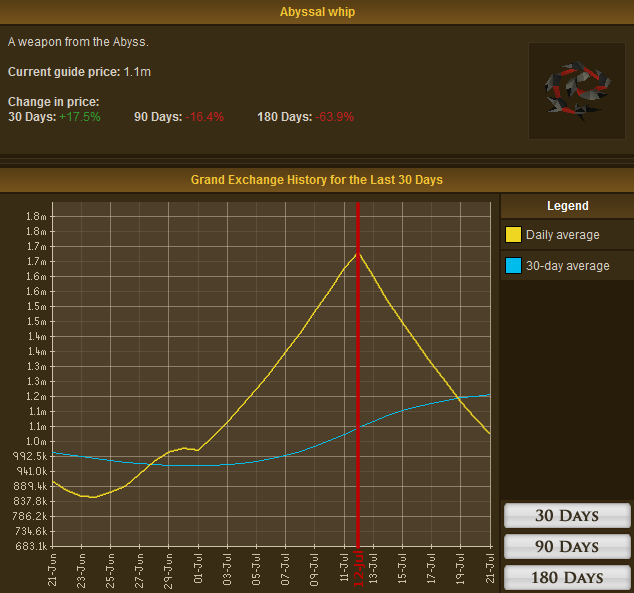 The Whip Vine was released on July 12th. As you can see, the Abyssal Whip plummeted beginning on the 12th. This was because of a couple reasons, A). The update had been released so people didn’t need to buy them to resell them anymore, B). Since the update was released it was time to sell their whips, C). This added up to no demand and a huge amount of supply, thus nose-diving the value.

This worry could have been avoided by taking one single fact into consideration before trying purchase any additional whips for resale. That fact is this: The majority of Runescape players who can use a whip already are, thus they already had an Abyssal Whip. The Behind the Scenes did not make any indication that multiple whips would be useful, so there was no reason for anyone to purchase additional whips.

The same basic principles are used in Merchant Clans and Pyramid Scams. In Merchant Clans, the leader starts buying an item, say 100k feathers, and the next day tells his second-in-commands to do the same. The day after that they tell the rest of the clan to start buying 100k feathers each. This now puts a huge demand on the market for feathers, so naturally the market zooms. Random people who have feathers make lots of money because they have none invested and were selling feathers before hand. 7 days after the start(or when he reaches his quantity, whichever comes first) the leader stops buying feathers and starts selling them. The next day he tells his second-in-commands to stop and start selling. 3 days later they tell the rest of the clan to stop buying and start selling. By now the leader has sold all his feathers to his second-in-commands and the other lower members of the merchant clan, anonymously. The second-in-commands have done the same thing, only they don’t know that they bought and resold some of the leader’s feathers as well. The lower members of the merchant clan spent the last 3 days buying the feathers of the leader and the second-in-command and are now scrambling to sell their feathers to a stagnant market. There is now a huge supply on the market but only the average(or possibly lower) demand. The lower members now have to sell their feathers at a loss just to recover some of their money.

See the picture? Only the leaders and innocents make any money. True, there are a few lower members which bail a few days in and are able to cash in their feathers while others are still buying. But most will continue buying until Mr. Big says to sell, and by then he’s already made his cash.

Whether anticipating an update or trying to participate in a merchant clan, most of the time you come out at a loss unless you sell at just the right time. This is where knowledge of the Market Game comes into play, as I said in the beginning. If you know what you’re doing you can anticipate what items will rise because of an update and you’ll sell those items a few days before the anticipated launch. Most game updates tend to happen on Mondays or Tuesdays and are occasionally on Fridays. I don’t really study update release dates but doing so would help increase the accuracy for resale dates. You don’t want to resell an item the day it will supposedly be wanted or after that day, you want to resell it before.

I’m not a Merchant Clan Leader and I’m not a Merchant. I’m not necessarily against intelligent Merchanting because it can be profitable, if you know what you are doing. If you don’t, you are more times than not in for an unpleasant and costly surprise.

If you have any comments I’d love to hear them. This has been written from a neutral view and I’d enjoy to hear what Merchanters and Anti-Merchanters have to say.