Beating Botters: Understanding to Fight Back

Runescape, as a long standing MMORPG (10 years, can you believe it?) has its share of problems, some more concerning than others. With its growing popularity, more and more people try to gain an edge by dishonest means, or at least means that are prohibited by the rules laid down by the Gower Wizards (Paul and Andrew) and were later expanded upon in more detail. The two biggest concerns for Jagex in terms of rule breaking are Botting/Macroing and Real world trading, as they directly influence the game world and especially the economy.
Now what exactly is a bot? A bot is essentially a script run in the background to control the actions within a game, especially for repetitive tasks (e.g. mining, fishing, woodcutting, etc.).

There are many kinds of bots and botters out there, both simple and complex bots, as well as serious and casual botters. Simple bots have extremely, wait for it….wait for it….. simple programming! All the program really does is move the mouse and click, if the camera is moved at all on the users’ end, it misclicks and won’t work. Complex bots on the other hand actually read the info from the applet and then make mouse clicks based on a logical progression that determines behavior. Below is a basic logical progression chart (i.e. a flow chart) explaining the essential workings of a complex bot. 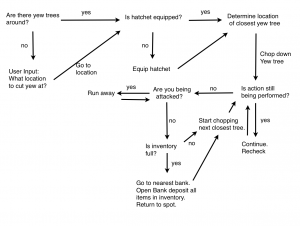 As there are 2 kinds of bots, there are also 2 kinds of botters, the casual kind and the serious kind. I define the casual cheaters as those that are really playing the game, but are just too lazy to work for a 99 or some other objective, they want max combat without working for it. The serious botters are those that will usually not only bot with one account, but with many at the same time (breaking 2 rules at once). These are many times out there to gain coins via resource gathering (like mining rune/pure essence) to then sell it on a coin-selling site.

Now let me clarify, botting is a serious offense regardless, it is cheating. It’s not the tame cheating like in Starcraft or Age of Empires with cheat codes, where the cheats are built into the game. This is more like cheating at a casino, you may get away with it for a little bit, but you will eventually get caught and the consequences are real. If you are caught botting, you can be temporarily banned and usually have skills rolled back, repeat offenders usually are permanently banned, and that hurts when you’re on an account that you already have the veteran cape for.

Botters are a major problem, the drive the prices of staple materials down to extremely deflated prices, making it hard for newer players to make a decent amount of money on basic material gathering like rune and pure essence, logs, lobsters and green dragon hides and bones. But we can fight back. Some of us are already doing so (you know who you are) in bot-busting sessions, and I encourage everyone to follow suit.

For those of you that want to help, the following is a list of some of the most frequent and populated botting spots in RS.

Just because someone is doing it, doesn’t mean they’re a bot, so be wary. Identifying bots can be tricky at times, but it’s usually relatively simple, so here’s a little check list to go through reporting anyone for botting.

Also, Skillers, don’t get yourselves confused with botters, so agian, a few tips for you:

Down with the bots!