The father of most ‘Games’ (which refers to any action, RPG, or strategy computer/video/console game) is, believe it or not, Tolkien. Yes, Mr. J.R.R. himself. When he wrote The Hobbit and The Lord of The Rings he wasn’t just writing bed time stories which turned into a fantasy world, he was writing an entirely new industry. Ofcourse Elves didn’t jump onto our screens overnight, it took many years.

It took about 20 years for Tolkien’s work to really branch off into a new industry. In 1974, Gary Gygax and Dave Arneson designed one of the most popular ‘board’ games to date, Dungeons & Dragons. Dungeons & Dragons introduced the idea of a game where the players would actually play the role of their characters. Allowing them to think, act, and re-act in almost in away which the player wanted. It was easy for players to visualize a fantasy world to play and live in when they had already read the works of Tolkien, who had built an immense world of realistic fantasy.

Dungeons & Dragons started the base of a progressional character building system, in the form of levels and ranks. There were other games which sprung up at around this time, however none were as detailed and thorough as Dungeons & Dragons.

About another 20 years later a now-extremely popular gaming company called Blizzard Entertainment came out with one of the most popular games of its time, Warcraft: Orcs and Humans. Warcraft was a real time strategy game where the players had to manage an economy and military simultaneously. The military had to protect the economy while also attacking the enemy. Though not the same type of game as Dungeons & Dragons, it was no doubt at least partially inspired by Dungeons & Dragons and Tolkien due to it originating as a digital version of Warhammer Fantasy, a ‘board’ game like Dungeons & Dragons, though published after.

Warcraft’s primary importance to Gaming history is as the precursor to the very popular and widely renowned World of Warcraft which was published 10 years later, in 2004. World of Warcraft has a visible influence from Dungeons & Dragons and Tolkien by the use of a progressional character building system, races, and classes. As in Tolkien’s Middle-Earth, players of World of Warcraft are on one of two sides, The Good side(The Fellowship in Tolkien and Alliance in WoW) or The Evil side(Sauron in Tolkien and Horde in WoW).

Going back in history a bit we find Diablo I, published in 1996, 2 years after Warcraft. Diablo was Blizzard’s, and for the most part the world’s, first step into single player progressional character building. In Diablo I players traveled through a dungeon (much like in Dungeons & Dragons) to seek a demonic enemy who was in some ways like Sauron. Players could only choose between three basic classes, Warrior, Rogue, or Sorcerer.

4 years later the world was met with Diablo II, another progressional character building game which added on to the Diablo I storyline. Diablo II brought with it more classes and monsters and for the first time both above and below ground combat and adventuring. This made it perhaps the most Dungeons & Dragons-like game yet. It didn’t have quite as much Tolkien though.

In 1998 Blizzard Entertainment led the way yet again, but this time with a futuristic real time strategy game called StarCraft. Modeled from Warcraft game mechanics and futuristic inspiration most likely accredited to Star Trek and Star Wars, StarCraft took the lead from Warcraft in the real time strategy industry by expanding game play as well as allowing for up to 8 players to play with or against each other simultaneously.

This is where World of Warcraft fits in. Blizzard now had enough experience gained from Warcraft, Starcraft, and Diablo I & II to create a Massively Multiplayer Online Role Playing Game, known as an MMORPG. As I said before, World of Warcraft has the progressional character building system and adventuring type like Dungeons & Dragons, but also has a Tolkienny feeling with multiple good and bad races.

But where does Runescape fit in you ask? Runescape was originally published under the name ‘DeviousMUD’. It used a relatively new system, the MUD(Multi-User Dungeon) system which allowed developers to use computer graphics to depict a world. DeviousMUD was released in 1998, though in 3 years it had advanced and was called Runescape. DeviousMUD didn’t have many skills and had a bad combat system, but this was changed with the release of Runescape. In Runescape players could level up different skills to increase their combat effectiveness as well as other characteristics such as woodcutting and cooking abilities.

Though not the best game on the market at the time, Runescape was one of the first to create a multi-user world where players could play together simultaneously. Only 3 years later, in 2004 (the same year World of Warcraft was released), Runescape 2 was released. This was a much more complex version of Runescape. All actions, from combat to woodcutting, were easier and more fun to do. Runescape 2 also had many more and more challenging quests.

Looking at how the industry has expanded since then, it’s fairly easy to figure out where a game originated from just by playing it for a few minutes. Does it have a progressional character building system? It probably came from Dungeons & Dragons. Does it have Elves, Dwarves, or Halfings? You can bet there’s some Tolkien in it. Is it based in the future with advanced technology and interesting races? It definitely has some Star Wars and Star Trek in it.

Throughout the Gaming Industry’s history you’ll find that most games can be traced to a book, movie, or TV show. This is because before computer, video, and console games, one of the most popular things to do was to read and go to the movies. Readers and viewers would imagine what they read or watched and (whether subconsciously or not) would start thinking of how something might’ve turned out in the movie or book had ‘this’ been different. As technology advanced, these people were able to put their thoughts and images into a digital world.

Below is only a small part of the Gaming Indus-Tree. In reality it’s so big that most computers probably couldn’t view it without it being shrunken to so many times smaller than it is that it would become illegible. 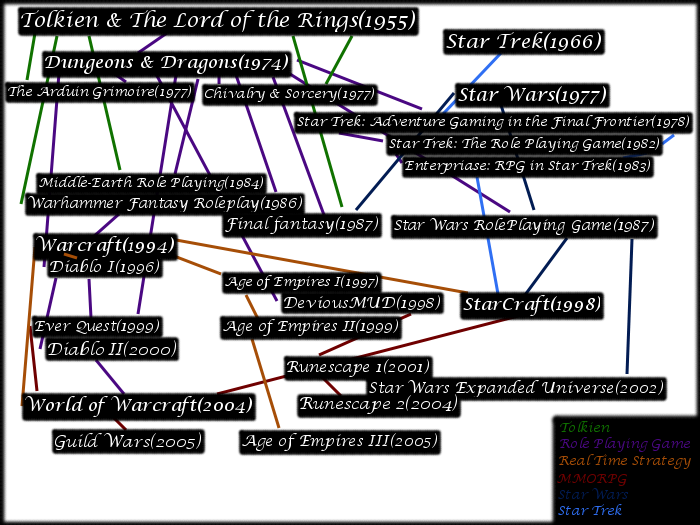 Now, how does this connect with my first article? As I said before, influences are passed on when one person is reading or watching another’s work. Such as Gary Gygax reading Tolkien’s Lord of The Rings. Once the second party learns additional skills (whether by continuously doing something regarding the first party as in my case where Runescape led me to learning how to write like I am now, or by learning another trade such as going to Journalism or Programming school) they use their new skills to try to recreate from memory the fun they had when they read, watched, or played the thing from the first party.

If you were to ask any of the creators or designers of the games I listed if they had any inspiration from any of the other games/books/movies I talked about I bet each one could note at least one which inspired them.

I hope these two articles have enlightened you at least a little about the good aspects of games and how games and media affect each other. I know I’ve left many games and media out but I’m sure you could fairly easily place those if you take a few minutes to think about them.

This article is filed under Gaming, Real World, Runescape. You can follow any responses to this entry through the RSS 2.0 feed. Both comments and pings are currently closed.