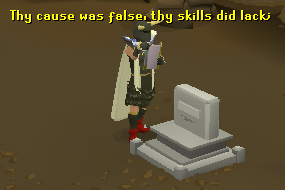 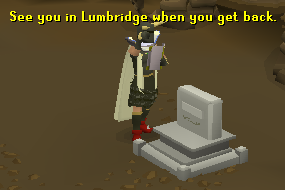 An all too common sight in this dark abode, but one wholly avoidable.

Now I’m no expert in survivatology, but in the time that I’ve spent fishing here in the Living Rock Caverns (some of which was spent researching them as well) I’ve learned a thing or two about how to outfit yourself to not only survive, but to be efficient as well.

You may have heard someone say, “Location is key” once in your life. Well they weren’t far from the truth. In fact when it comes to surviving in the LRC, location is key.

First off let’s talk about which world to be on. Yes, you might like staying on your native world of 132, 48, or maybe even 2, but that’s not the safest thing to do when in the LRC. The reason for this is because the more people there are mining or fishing with you, the less likely you as an individual, are to be attacked thus prolonging your life.

Secondly let’s talk about locations of ore (or ‘mineral’) deposits and fishing spots (or ‘shoals’). There are 3 Rocktail Shoals, 4 Cavefish Shoals, and 4 Mineral Deposits (2 Gold and 2 Coal) to the south right after you enter the Living Rock Caverns. These are the most popular places to fish and mine respectively. There are many other shoals and deposits through the cave but since there are rarely any other players at these spots it is more dangerous to use them.

Fishing in the LRC (Living Rock Caverns) requires a Fishing Rod, not a Fly Fishing Rod. Some people get this confused before their first time down and are sorely unhappy when they find out that only a normal Fishing Rod can be used because both normal bait and living minerals are bait.

If you are going to be fishing rocktails you will need a pickaxe to mine your living minerals. I’d suggest rune or if you can afford it, dragon. Since Living Rock Creatures require level 73 mining to mine the remains you probably shouldn’t be fishing rocktails with less than level 73 mining. If you really want to fish them without 73 mining then you won’t need to bring a pickaxe with you because you will have to buy the living minerals for around 426 coins each off the Grand Exchange. If you buy your living minerals then you should buy atleast a thousand or as many as you wish to fish as stated above.

Note: Buying living minerals reduces your profit by around 20% which is why level 73 mining is suggested. 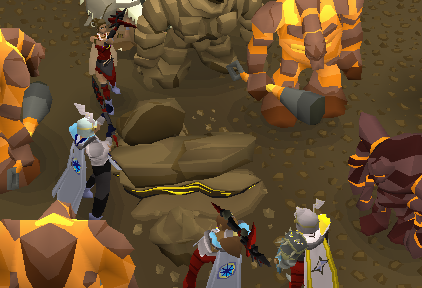 Mining is slightly easier than fishing because you don’t need any bait or fishing rod. This allows you to carry 27 at a time assuming you carry your pick in your inventory and are wielding a good weapon.

Concentrated Coal Deposits are denoted by the black line or vein going through them. The two best deposits are found south east of the entrance and almost due west of there. There is a third coal deposit slightly to the north east of the first one.

Concentrated Gold Deposits are denoted by the gold coloured vein going through them. The two best deposits are found further south than the first coal deposit and just south west of the entrance.

When mining coal it is a good idea to wear Varrock Achievement Diary armour 1 or higher as it gives a chance of mining two coal ores at once, increasing the amount you can gather per hour.

When mining gold it is a good idea to wear Varrock Achievement Diary armour 2 or higher as it gives a chance of mining two gold ores at once, increasing the amount you can gather per hour.

If you have level 43 magic or higher you can smelt gold ores without slowing your mining rate. To do this you’ll need some nature runes and either a fire staff (normal, battle, or mystic is fine but I’d suggest mystic, a lava or steam staff will also work) or a stack of fire runes. While mining use the Superheat spell on a gold ore and wait for the animation to completely play through. Once you start swinging your pickaxe again you can use super heat again. Using superheat too quickly will stop you from mining while superheating. Using the Superheat method is very useful as it removes the time spent on smelting via a furnace. The downside is that you must use nature runes.

Level 70 defence, attack, and strength is suggested, but not required. Additionally level 70 Constitution and atleast 43 prayer is also recommended.

Most of the people I see die here aren’t wearing anything or are wearing low level armor. Here’s a cold hard truth: If you are not able to wear atleast rune armor then you shouldn’t be here! I don’t care if you’re a pure who freaks over having 1 defence or just a less experienced player, having less than 40 defence is like running to the Jad without 37 prayer, you die fast. 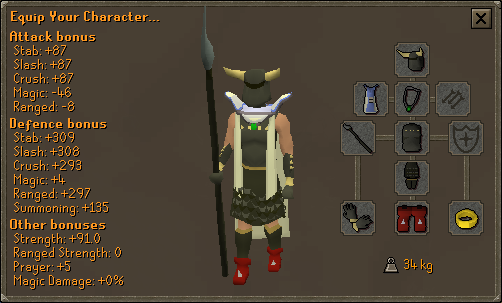 Now, assuming you’ve taken my advice and have at least 40 defence I would suggest full rune. However due to the level of the Living Rock Creatures I wouldn’t suggest even being down here without level 70 attack, strength, and defence. The primary reason for this being that it allows you to use Full Guthan’s Barrows armor. Guthan’s armor not only has great defence but also has a set special effect, life stealing. Occasionally when attacking any enemy you will steal life points from them equal to the amount of damage you dealt (indicated by the purple swirl going up from your enemy). This healing effect happens often enough most times to keep you alive if you’re mining, fishing, or just killing Living Rock Creatures.

An alternative which works well for those more skill and quest inclined is to bring the Enhanced Excalibur. The special attack of Enhanced Excalibur heals you for 40 lifepoints every 2 seconds for 10 seconds for a total of 200 lifepoints healed (the equivalent of a shark). It also raises your defence by 15% temporarily. If you’ve completed the Elite Seer’s Diary then it will heal twice as much over twice the length of time (40 every 2 seconds for 20 seconds). This special attack requires a full special energy bar and is good to use in conjunction with a weapon like the Abyssal whip. It takes 5 minutes for your special energy bar to fully regenerate from being fully empty(this is equivalent to 1 shark very 5 minutes).

Another good, but expensive, way to stay alive is to use the special attack of the Saradomin GodSword. Its special attack requires 50% special energy and heals half the damage dealt to your life points and restores 1/40th of the damage dealt to prayer. This has a minimum restoration of 100 life points and 5 prayer points assuming you hit the target (meaning so long as you hit 1 or higher). This is a great way for higher level players to restore health, however, due to the price some players may prefer Guthan’s. Another downside to this weapon is that it prevents the use of a shield which means a significant loss of defence.

The final efficient way of healing is to use a Bunyip or Unicorn Stallion. These are both good but I don’t highly suggest them because:
A.) If you’re fishing or mining it would be better to use a Granite Lobster or Lava Titan respectively because they give fishing and mining boosts.
C.) Bunyips only last 44 minutes and Unicorn Stallions only last 54 minutes, meaning you will have to refresh their timers fairly often.
B.) Refreshing any familiar’s timer requires another pouch of that familiar and a certain amount of summoning points. This takes up inventory space and extra time due to needing to go up the rope and restoring your summoning points at the mini-obelisk not far from the top of the rope in the dwarven mines.

If you’ve chosen not to use the Guthan’s barrows set I would suggest Dharok’s or Torag’s Chest plate and legs. Both Dharok’s and Torag’s give equal defence so pick your pleasure or just buy the cheaper one. Both the plate and legs give great melee and exceptional ranged defence, both of which are needed down here.

The Dragon chainbody and platelegs (or skirt for you ladies) also give good defence and don’t cost too much.

The Crystal Shield (Full) would be the best shield to wear if you haven’t spent an arm and a leg on a DragonFire Shield. This is because the Crystal shield gives the second best Ranged defence in the game and gives melee defence equal to the Dragon square shield(which is one of the best).

If you don’t have, can’t get, or don’t want a Crystal shield then I would suggest the Dragon square shield (if you’ve completed the Legends’ Quest). The reason I say Dragon square over Obsidian shield is because although the Obsidian shield has great ranged defence, its melee defence is lacking in comparison to the Dragon Square shield. Since most of the time you are in combat down here you will be receiving melee damage it is better to have the melee defence. Yes, the obsidian shield does also give +5 strength bonus but I feel the additional defence of the Dragon Square outweighs the strength bonus since you won’t be doing alot of fighting.

You might’ve noticed I didn’t mention the Chaotic Kiteshield. This is for two reasons:
1.) Only about 26.7k players have the level required to wear this shield, most of which won’t be mining here.
2.) I don’t think it is worth spending the charges of this shield here.

The Guthan’s or Torag’s helm would give the best defence for a helm though if you’ve just come down here for a slayer task a Slayer helmet (does not have to be a ‘Full Slayer Helmet’) would be best.

Amulet, cape, gloves, boots, and ring don’t need to be anything special because I don’t think there are any which give special bonuses here.

Note: The Amulet of Glory does not increase the chance to get gems when mining here because concentrated deposits do not have any gems.

That’s all I have to say for now…I think. If you have any thoughts or comments please post them. Don’t bother posting criticism as I’ll just see that it gets fed to a Living Rock Creature 😉 Just kidding

Oh, and one last thing, set your quick prayer to Protect from Missiles so that you can quickly turn it on incase you find yourself with low hitpoints. This allows you to run away from a Living Rock Striker without taking damage from its ranged attack.