The Satirical Six and a Half

“The more things change the more they stay the same.” I am sure that you have all heard that quote at least once in your life. However, if you are an avid fan of RSBANDB, then you most likely have heard it on the podcast, R!Update. There is a ton of controversy on the meaning of it, but I am pretty sure that if we thought about it for a while, that we would find at least the basic meaning.

Many things are added and changed to the game of RuneScape. Inasmuch, that maybe there isn’t much of the original game left. Through much sifting through posts and articles, I realized that there are actually several things left in this great fictional world. As a going away present, I present “The Satirical Six and a Half”. (The secret is that there is nothing satirical about this article.)

Throughout the game, there have been different waves of clans for different reasons. A clan that I once was in was the sole purpose of Pest Control. Another was for other mini-games, and then the PKing clans of course. In the couple of years, clans have been extremely supported with new gadgets here and there. Clans shall always stand in an MMORPG such as RuneScape. They may change the areas, such as from Dungeoneering to flax picking, but the spirit of clan hood lives on. Well, it lives if there is a spirit of clan hood.

The Grim Reaper has failed to clean his house again, and the Easter Bunny is as useless as learning the Klingon language. Never fear! The ghost busters are here. As every year brings another useless set of items, they were never for personal gain. The drop parties were, of course, removed. Nevertheless, the spirit of the evil, overpriced party hats are still in motion. The events at times can be extremely fun with a little spider buddy to help you out.

“Kirbster1995! I need your help!” Do these words ever get old and irritating? Of course they do! Will they ever leave me alone? Nope! The random events are the most shrunk-down game installment ever; however, their legacy lives on. While there are no more evil ents or rock golems to disturb your calming brick collecting, we still have the greatest and most disconcerting events left. Since I had an article of this previously, I won’t touch on it much other than the fact that the mime suit has mystical happenings.

No matter what, there has been, is, and will be the players that want something they can’t have. Those that are content with what they have tend to remain quiet. Now, there is just a small minority that has to rack up a ton of threads on the forums. (Who even reads the RuneScape forums? I just happened to look there, but became extremely sorrowful when I saw some of the players that haunt the boards.) Those threads are mainly rants that complain about one thing or another about the game. Fortunately, Jagex has shed some light that those ranters are actually the minority of the people.

Oh, and don’t forget the other player behavior in-game. For example, those weird guys that turns into a girl and get a “boyfriend”. I haven’t seen it in a while, but I still recall that happening. 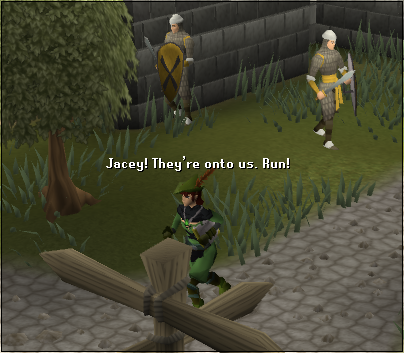 You can click if you want to. You can leave your friends behind, because if your friends don’t click, they aren’t any friends of mine. We have a little bit of addition of the function keys now in the game, but we still have the great clicking of the game. So, those who have played for five years probably have carpal tunnel. (Or perhaps I was just born to get carpal tunnel fast. Fortunately, I have magnet bracelets. :D) Now what has been changed about clicking? The fluidity of it has changed. Of course, there was nothing wrong with the mice, but the avatar of our characters move more gracefully through the world.

The progression of all things grows exponentially in the Universe. Some planets are completely useless with no life on it. Others have advanced or primitive civilizations on the planets. I refer to the Universe like the RuneScape world. I am not saying the Universe is incomplete, but some places in it are completely lifeless. RuneScape continues to expand without tying up the fabrics of quest stories, skill milestones, unbalanced game interfaces, etc. Some year, we will probably see the storylines ended, but there will be several more later on that will require another large amount of time to end. There could also have a high milestone reward for each skill, yet it is nowhere near this point. This will always stay the same.

Alright, so I had no intention of having a “half” of a section. Since I decide how long each section is, there technically is no way to measure a half. I know that these six aren’t the only things. If anybody can find some small ones, please let me know by commenting or messaging me in the forums. I would be tickled by the fact if I ever got a private message from time to time.

Also, I may note that this will be my last article. Sophomore year, as it might have been a very simple year for you, it is very time consuming into my schedule. I simply don’t have time for the Informer. Thank you for everybody that has read my articles and criticized or commented. The support has been helpful for not only the articles, but in my schooling. I will still be around RSBANDB and on RuneScape, but even with RuneScape I will be removing my membership. Farewell.