If you’re like many with an iPod Touch 1st generation, or the original iPhone, you’re out of luck when it comes to iOS 4. Well, at least officially. While porting iOS 4 was thought of, I think it’s pretty well regarded as a huge resource hog and shouldn’t be used even if it were to be offered for the older devices. That’s where jailbreaking comes in. You can get nearly all of the features offered by iOS 4 on all of the older devices (and it’s been around quite a bit longer on the jailbroken side) while breaking free of Apple’s restrictions.

With the latest review of the Digital Millennium Copyright Act (DMCA) in the United States, jailbreaking a device that you own is legal under US law. You’re even allowed to unlock your phone and move to a different carrier if that’s what you wish.
The following will apply to the iPod 1st gen with 3.1.3 and lower, though for newer devices and OS versions, please refer to the Devteam’s blog. Unfortunately Jailbreakme.com is no longer working, so a tethered jailbreak is required unless a new site is set up to exploit the already patched security issue.

Download OS 3.1.3 either through iTunes as an upgrade, or google around to find the correct version for your device. Be sure to back up (sync) your device pre-upgrading.

If iTunes offers to upgrade your device with the version you want, feel free to just allow it to. If you have your own IPSW file, plug in your device and press shift then the Upgrade button. Locate your ipsw file, and prepare for the upgrade. 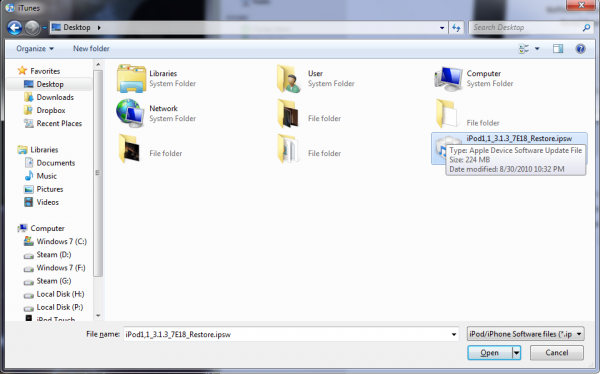 Your iPod will then be in a reinstall mode and will show the Apple logo and a progress bar underneath. Once the process finishes, you’ll have your new OS and all your music, apps, videos, etc.

For jailbreaking the older versions, we use Spirit to jailbreak. Close iTunes, and run the executable with administrator privileges to jailbreak your device. When your device reboots, you can use the Cydia app to customize everything about your new jailbroken device.
After upgrading, I’d recommend using legal options offered through Cydia and get:
– the PDF Exploit patch put out by the Dev team ( PDF Patch (CVE-2010-1797)
– OpenSSH (you’ll need this if you want to do the language removal talked about further in the article)
– Flashlight (The best normal flashlight app. Probably the brightest flashlight app you’ll find.)
– Five Icon Dock (5 icons in the dock)
– FivelRows (5 rows instead of 4)
– Five-Column Springboard (5 columns instead of 4)
– Winterboard (Change settings, such as background, opacity of icons, remove the lower dock, and more)
– SBSettings (use this by swiping across the top of your screen, and you’ll be able to turn on and off WiFi, Bluetooth, SSH, kill processes, 3G, take notes, & more)
– MobileTerminal (A terminal for the iDevice – Be sure to change the default password from alpine to something else)
Once you’re happy with everything, there is at least one thing I’d recommend doing. Using OpenSSH and an SSH client on your computer, along with this guide you can clean up the launch daemons on your iPod or iPhone to speed up startup and increase available resources on boot. You may also consider using this guide to remove excess language packs.
If you’re on the 4.X strain of the iOS, the applications languages, and launch daemons will still apply.

EDIT – http://jailbreakme.com/ is now working. You should be able to use the site if you’re jailbreaking anything up to 4.0, instead of using Spirit as mentioned previously.