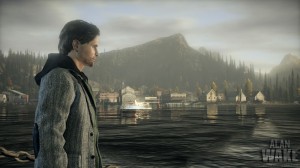 Alan Wake is the newest game from Remedy Entertainment which brought us the famous Max Payne series. The studio hasn’t came out with a single new game in 7 years. The expectations are high having many of us wondering if the studio will be able to bring us another enjoyable game. Luckily the studio has done it again. I was surprised to see myself enjoying playing Alan Wake so much and not being able not to put the game the down. The game follows an interesting concept trying to combine movie like cinematics along with book like narrating in to blend in together and work as a video game.

The story follows our main protagonist Alan Wake who has recently gone on a vacation to a small suburban town in the mountains under the name of Bright Falls. From that point on some things go wrong and we find Alan in under some bad circumstances when some of his stories come to life and his wife gets kidnapped. It would be extremely difficult to try to summarize any further considering that Alan Wake is a very heavy story driven game and giving even minor details might ruin the fun for you. Story remains the game’s most enjoyable aspect truly letting yourself to lose in this world trying to grasp every single minor details that Remedy gives us. I often found myself trying to collect as many manuscript pages which pose as one of the game’s possible collectibles. Manuscript pages show more light on the story and let a player get a better understanding of what is going on. It’s another nice touch which I haven’t seen since Bioshock where the game’s story line was driven heavily through audio tapes scattered around the levels. 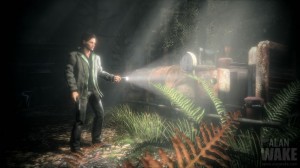 Alan Wake provides a more unique gameplay approach rather than the typical shooting games usually the light as the main force able to drive enemies away. Just by playing the game for couple of minutes you’ll quickly realize that the light is your best friend letting you restore health when walked into it or using to fight every single enemy in the game hence the expression in difficult parts you’ll often find yourself “heading towards the light”. On other hand I was not highly satisfied with the game’s gameplay mechanics. The dodging of enemy attacks can be a bit irritating when you finding yourself faced with multiple enemies surrounding you. Another main aspect which some gamers’ won’t enjoy is the fact that you constantly have to point your flashlight at enemies combining shooting bullets while at the same time making sure that you flashlight is full on batteries and your gun is fully reloaded. Some gamers might get turned off by this multi tasking, but it’s something that you’ll get used to quickly. 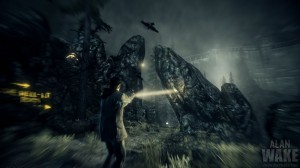 The game follows in episodic format providing us with 6 different and unique episodes which together can be completed roughly less than 10 hours. Although not as lengthy as other game’s on the market Alan Wake has some great replay value providing 3 different difficulty settings along with nice easter eggs like being able to watch spooky TV shows, listen to radio, and find hidden treasures. All game completionists will be looking in quite for a treat if they plan to completely get everything in the game. The pacing in the game works really well constantly keeping you interested and offering re-cap of previous events at the beginning of each new episode which I found to be a quite nice touch. Every new level you will often yourself in different surroundings by constantly grabbing your attention the second you might get slightly bored. 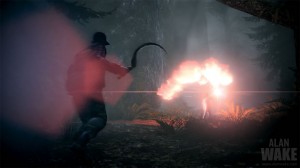 providing with top of notch voice acting when often at times I forgot that I was actually playing a video game. Some of my most memorable and loving songs are featured in this game. The first time I heard Harry Nilson’s Coconut I couldn’t help, but smile. The overall music tone sets the perfect creepy atmosphere which we come to expect from other horror games I usually found myself flinching and jumping from my couch everytime I heard “taken” moaning and the sound of axes flying towards me. Another enjoyable aspect of Alan Wake is defiantly the boss fights. Although it’s technically a bit vague calling some of the game’s most notable encounters boss fights, but they are certainly interesting and unique. Without going into any further detail you would be surprised to see the game’s final boss.

I found Alan Wake to be one of the most underrated game’s to be out this year. It might not appeal to everybody with its unique storytelling and gameplay mechanics, but if you are looking for something fresh and new then defiantly give Alan Wake a try.