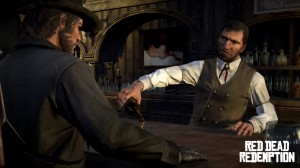 Oh the glorious Wild West. How much many of us came to love it from all the “spaghetti westerns” we watched, but how come the Western genre was barely touched in the gaming world? Well now it’s up for people at Rockstar to change that bringing their own vision and take on the Western genre in gaming. Rockstar brought to us “Red Dead Redemption”.

Red Dead Redemption is the sequel to the largely unheard of game on the PS2 and Xbox. Rockstar changed the formula entirely and showed that it is more than just “GTA with cowboys”. The game opens up with a really cinematic cutscene and introduction to our main protagonist John Marston who has been hired by the government to “deal” with the remaining members of his gang. From that point on the game grabs your attention and doesn’t want to let go until you see the final cut scene. The game introduces us with all the beloved and rich characters which we came to expect from some of the previous Rockstar open world games. Be it Irish, your typical Western no good for nothing drunk who manages to make an alliance with you during the courses of the game or Nigel West Dickens who is a salesman which offers many “magical potions” which just cure any disease or problem you might have with your health out there. Another quite memorable character worth mentioning and my personal favorite is Seth. A dirty, crazy, old lunatic who from the looks of it still doesn’t know how to properly use a shower is caught up with trying to find the map to a mythical treasure. The roast of the characters is enjoyable and something that will most defiantly make you more attached to the game. 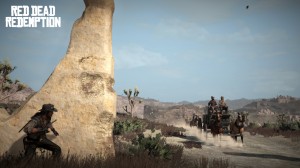 The world of Red: Dead Redemption is massive. It offers the player the same type of freedom which we came to love from Rockstar’s other sandbox games to fit best with the Western world featuring large landscapes from forests, mountains filled with snow, or enormously large deserts with plenty of gang hideouts. To me having the simple of idea of being able to explore this wonderful world and having such a robust amount of freedom on what I want to do in the game certainly scores as another gigantic plus. Besides having such a huge open world the game features perhaps one if not the best soundtrack I ever heard. Although the game does not feature the typical “radio stations” from GTA franchise, but it does play songs at important plot points of the game which come so unexpectedly yet amazingly enjoyable so when they do, it all comes together just perfectly. It’s one of those songs which you would want to listen to repeatedly after hearing them for the first time in the game. 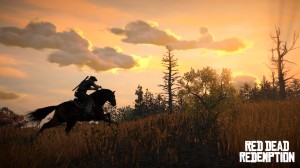 One of the large aspects of the game is obviously the gameplay. It has stayed pretty familiar to what we came to expect in the GTA franchise but adding a new take on it introducing the “Dead Eye” targeting system. At any point of the fight you can enter “Dead Eye” targeting mode by hitting the right trigger which slows down time and allows you to target any part on your enemy’s body. You want to shoot that guy’s hat off just to scare the living crap out of him? Be my guest. In Red Dead: Redemption it is possible. The game implements a good cover system which frankly with the game’s relatively easy difficulty you won’t be using that often. The mission structure in the game on other hand was quite enjoyable featuring lots of variety from typical escort, driving, shooting, or even racing missions. It would be difficult to get bored with all the different mission types Rockstar throws at you. 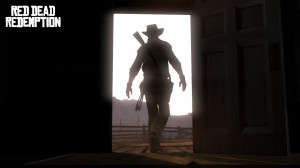 Obviously besides the main story there are plenty of things to do in the West. I found it so easy to get side tracked in the game just by about anything. From doing simple errands for the people of Wild West or going bounty hunting I found myself having a blast. For all the completionists out there the game will offer plenty to do and getting 100% won’t be an easy task.

Red Dead Redemption features a vast multiplayer mode which is pretty similar to GTA IV’s multiplayer. I sadly no matter how hard I tried didn’t see myself enjoy playing online that much as I enjoyed the single player mode of the game much more. Although the game does feature some unique multiplayer modes to keep things fresh and interesting it wasn’t something that I could see myself playing for a long amount of time.

The game didn’t come without couple of flaws. The most famous one being several glitches the game features which along the time could easily be patched and fixed. When I was playing one of the story missions where you had to follow a dog to the forest the dog simply stood at a single spot refusing to move anywhere forcing me to restart the mission. This is one of the examples I can give which you can possible encounter during the course of the game. But besides several glitches I was hugely disappointed by the game’s “honor system”. The honor system in the game works just like any other karma choices in other titles such as Mass Effect 2 or Fallout 3 for that matter. At least so I thought. I was excited when I first heard about it in several previews I read online. Now what can be more bad ass then riding around Wild West as an outlaw doing what you please without anybody being able to stop you or being your typical Western hero saving people’s lives and making the West a better place? Unfortunately Rockstar executed the system poorly. From the first second I boot the game up in my console I was determined to be the worst possible criminal the world can ever imagine. My hopes were quickly shattered as I progressed throughout the game realizing that the only way you can decrease your honor is by simply go on random killing sprees in towns or making some unimportant decisions in several side quests which are completely unrelated to the story. Nearly every single mission in the game rewards you with honor decreasing your chances on ever wanting to become that criminal we all deeply want to. Once again it’s something I wish Rockstar put more thought into. 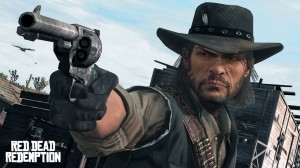 There was another aspect of the game which certainly ruined some of the fun for me and is the ending. I am not just talking about the game’s ending, but the missions which you have to go through before beating the game. Without spoiling anything or going into any deeper detail the missions felt out of place and the ending itself was delivered unexpectedly and in my own personal opinion disappointing.

Despite all the short comings in the long run I had seen myself enjoying the game. Certainly I would not go as far as to say that it has been the best game out this year, but it’s something that you should defiantly check out if you are a fan of Westerns or open world games in general so all you Clint Eastwood “wanna-be’s” (you know who you are) will have something to enjoy.