Well this should be the last article in the series. Hopefully by now you’re up to 59, and so I only need to go to 80 and you’ll be set. From 59 you can pick two patches that will get you up to 80 fast, so lets get into the training!

The first choice I’m going to talk about is going to cover the fast method to 63. At 63 you will be able to catch Red Chinchompas so you know why I’m going there first. Red salamanders are the fast way. Grab 4 small nets (because at 60 you will be able to lay 4 traps at a time) and 4 ropes and head off to the ZMI altar. Depending on the route you take, you should see where you can catch Red Salamanders. A little West, down the hill, is one spot you can catch them and it has enough trees so you can always have a trap set. Normally you can also have a trap set off (unless you are having a really bad day with catching them) and you should get to 63 fast. The other spot is at the bottom of the hill beside the Monks of Zamorak.

Either spot is just as fast but I would recommend hunting at the spot west of the ZMI altar entrance. Now unless your going to bring a long a lot of 1 type of rune, you are going to want to just release the red salamanders after you have caught them. You can bank them at the G.E. but it might take a really long time before all that you have caught have sold, and that’s just going 63, going to 80 is going to take even longer to get rid of them, so just releasing is easiest. If you are having fun at the grey chinchompas, and want to make some money in the process to 63, just stay there. Bank to get a 4th trap, so getting 63 will become faster. It shouldn’t be long until you get to 63 so once you get there, you are going to be moving around, depending on where you were training to get to 63.

At level 63 you can catch red chimchompas! Your going to hate their noise but you will like the money that comes from them. If you hunt these guys straight from 63 you are going to make ~20m with the current red chinchompa price. 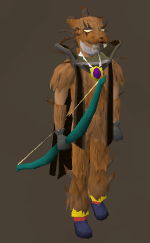 The above picture if what I was wearing when I was getting 99 Hunter. If you think back to Miscellaneous Hunter Training Part 2, you will remember that spined larupia are indigenous to the Feldip Hunting Area, so because they they are indigenous, wearing the Spined Larupia clothes will make catching them more likely. You may be asking what the Longbow is for, but those little red chinchompas like running all over the place so killing them is the only way to get them back faster then waiting for them to come back themselves. A shot or two is all that is needed to kill them, even with iron arrows. The necklace, cape, gloves, boots and bracelet slots can be whatever you want to have there. One thing I’m not that sure about is if a Spotted or Spottier cape will increase the catch rate of the red chinchompas so that might be something to look into. At 99 there is always something caught so I don’t really need to worry about if they are catching or not because most of the time they are. Really, the most important parts of your outfit are the Larupia Hat, Body and Legs.
Now when I am catching these guys my inventory will look something like this. 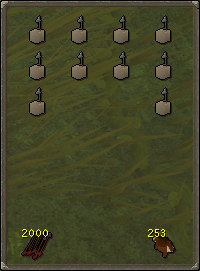 I have 10 traps because when you get stuck in a random, you never know how long it will take so you might lose some traps, and instead of running to the bank and possible losing your spot (if it hasn’t already been stolen) you can just place one of those traps down and you’re set back up. If you have the summoning level, Spirit Larupia (level 57 Summoning) or Arctic Bear (level 71 summoning) pouches really increase the number of red chinchompas you catch. If you want to invest in some Hunter Potions, those also help catch more red chinchompas. Now remember, this is the moneymaking method of getting to 80. It does take a while to get to 80 catching red chinchompas but you make a fair amount of money. However, if you want a faster method getting to 80, with making no money at all (well, a little from the random event rewards) then you are going to want to catch red salamanders (or stay there if you were already catching them to get to 63). Just keep your current inventory if already at red salamanders because once you hit 80, red chinchompas are going to be the thing to catch.

Now is where you start to power through the levels. At 80 you are now able to place 5 traps at a time. Just look above to see the set up for red chinchompas because I found that it works the best if you are powering to 99. You will only be able to catch about 100 per hour, but that greatly increases as you level closer to 99. First off, if you are using a longbow with arrows, don’t equip the arrows until you are going to actually attack the chinchompas because if you missclick as they are going into a trap, it won’t register as a caught chinchompa and you will have wasted a perfectly good chinchompa. The best spots to hunt would be here (best spot to hunt), here (second best spot to hunt), and the area around here (third best spot to hunt). During the day (EST) a German world will be a good place to hunt. Whenever I couldn’t find a world (and trust me, I tried almost every world) I would try out the other language worlds. Most of the time there will be no one there, in either of those 3 areas. The French worlds are more populated and since I got 99 Hunter before the Brazilian worlds came out I’m not sure if they are populated most of the time. Can’t really think of anything else besides watch out for the jerks that try to steal your spot. That is probably the most annoying part of the skill, but if you can get around that, then you are good up to 99.

I hope these articles helped. If these all had been together it would be way too big if I explained everything. Hope you’ve seen Shane’s post about how the RS part of the Informer is going to work. I’ll be going to be going into another skill next month. You can PM me on the forums or just post something in the comments if you have any questions and I’ll do my best to answer them. But until next time, Tim Out!