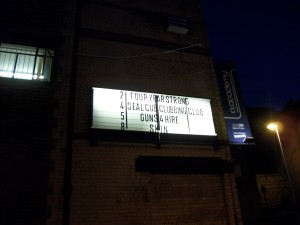 At the beginning of 2009, Four Year Strong were almost completely unknown here in the UK. Then they were selected to appear at the Slam Dunk festival, a English festival that has received comparisons to a scaled down Warped Tour. After a whirlwind year, a cover appearance on Kerrang! and the release of their new album “Enemy of the World”, Four Year Strong are big news in the UK. So it would come as no surprise that when Four Year Strong announced 3 UK dates that followed their Slam Dunk appearance, that I jumped at the opportunity to see such an amazing band that are already well established in the US, in a venue that holds a mere 400 people.

When first arriving at the setting for this gig, I wondered whether I’d got the wrong address. A small sign on the side of a warehouse read ‘Liverpool O2 Academy2’ and knew that I was at the right place. We were amongst the first in the line, with only a handful of dismal looking teenagers, smoking and sporting contrasting Four Year Strong or other similar pop-punk tees. After standing in line for a short while, word spread around the queue that the band we had all paid £9 to come and see (and may I say what a brilliant price this was) were sitting in the car park, twenty feet around the corner, and were due to come out for a meet and greet in a few minutes.

The group of teenagers, which had since swelled, turned from weary and slow to excited and buzzing. And then without ceremony or fanfare, a bunch of 5 normal guys wandered across the street, to stand huddled in the doorway of a martial arts club that faced the venue. It took the members of the audience-to be a good five or ten minutes to realise just who it was that had wandered from the rundown car park. Four Year Strong were quickly swarmed by groups of similarly excited guys and girls, although I would say the blokes looked giddier than the ladies. Meanwhile, Four Year Strong looked far from giddy. Although not overwhelmed, the word that sprung to mind was embarrassed.

Then at 7pm, the line started moving through the battered and abused door, up some steep stairs and into a very different, clean and modern bar area. I quickly began looking around to try and see where the stage was. In my peripheral vision, I saw a barrier, with a drum kit behind it. The stage was literally a floor area, barely raised off the ground and a mere three or four foot from where the adoring fans would have themselves crammed.

First up was a local band, My Emergency, who was replacing Fireworks (who accompanied Four Year Strong on the other two UK dates) who couldn’t be here. Their pop-punk was a good start to the night, with their music bearing resemblance to English stars You Me at Six. Although relatively unknown, they seemed to have gained a following through their short twenty minute set. So when they came to their final song, they announced that this was to be their last gig together as a band, and we were to be the last people to hear this song live. Now I have no idea if this was just a ploy to get the crowd going, or whether they were genuinely splitting following this gig. They didn’t look particularly emotional, nor did they leave the stage with any real goodbye so I’m inclined to lean towards it being a technique to get this crowd going, which it most certainly did. Upon further inspection of their MySpace site, it would indeed appear that My Emergency have split following this gig. A sad loss for British music.

Although they haven’t released any formal EP or album, you can view My Emergency’s work here

Next up following a brief interlude were The Wonder Years, a pop-punk outfit from Philadelphia, Pennsylvania. The Wonder Years were particularly enjoyable, which came as a surprise to me because I hadn’t previously heard a great deal of their music, and the material that I had heard had been fairly light, and slightly disappointing. The Wonder Years live are a different story, putting much more life into their music, and giving it a lift into upbeat, party pop-punk. This band were clearly much more well known, with the crowd whipping into more of a frenzy, completely enveloping the lead singer when he decided to lean into the crowd. Although less remarkable, their performance was slightly predictable, but that didn’t make it any less enjoyable. The Wonder Years made a good act to open for Four Year Strong, possessing a slightly lower tempo brand of pop-punk, similar to the tunes that are churned out by the headliners.

You can buy The Wonder Years’ latest album, The Upsides, here 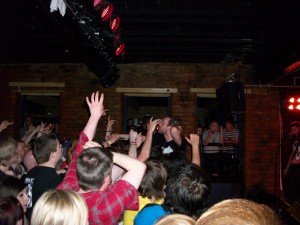 Following The Wonder Years was the headliners. The act everyone was here to see. The so called “saviours of pop-punk”. The room darkened and the famous Team America quote regarding various human genitalia and the activities indulged by their body parts. The band then took to the stage, to a chorus of whoops and cheers – the crowd were clearly excited to be seeing such potentially huge band in such intimate surroundings. They opened with “It Must Really Suck to Be Four Year Strong Right Now” which really set the tone for the evening, with catchy hooks and harsh yet melodic vocals – a trait that is sweeping the pop-punk genre. 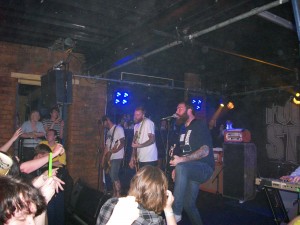 They quickly followed it up with older number Bada Bing! Wit’ A Pipe! which was met with a great reception. The set list read like a Four Year Strong’s greatest hits, peppered with songs like Maniac (R.O.D), On A Saturday, Catastrophe, Beatdown In The Key of Happy and Wasting Time amongst others. Four Year Strong reeked energy and enjoyment as they exited the stage. Having barely completely stepped off it, the band were quickly being summoned back to it with chants of ‘FOUR YEAR STRONG’. Re-taking the stage, they launched straight into The Take Over, although it was purely build up to the massive Heroes Get Remembered, Legends Never Die that closed this amazing concert. The energy, love, labour and pure dedication that Four Year Strong put into the performance showed that 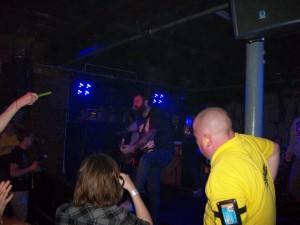 no matter what size the venue or crowd, they will always do their best to ensure that everyone in the room loves the music they have come to see. I would most certainly recommend you to go see Four Year Strong if they visit a town near you, because it will most certainly be a show that you will not forget.

You can buy Four Year Strong’s latest album, Enemy of the World, here

My friend Chris attended with me, here what he had to say about the gig:

“The venue was definitely the best one for gigs that I’d been to because you were literally inches away from the band. Although the walls and floor were a bit moist, the music was definitely pumping the crowd’s adrenaline”

This article is filed under Music. You can follow any responses to this entry through the RSS 2.0 feed. Both comments and pings are currently closed.