Welcome to all humans of that one human tribe in that one place where you had that one opportunity to read that one article that you clicked on a few seconds ago to get to mine.

Fletching is one of the diminished skills due to the ease of getting it to level 99. Yet technically, it still takes multiple days to achieve it. I would like to take this article and dust off the old treasure chest of fletching. I will just start off with the pros and cons and go from there.

Just as fishing and cooking are those skills that you watch episodes of Star Trek or something else, fletching isn’t any different. However, strings do only fourteen actions so I would suggest only doing such things during the bow creating part.
There are only three things involved with fletching: a knife, logs, and bowstrings. Each of which are fairly easy to obtain by either buying them or chopping them yourself. So it is a fairly simple skill to train for anybody. However, I have noticed several people requiring a knife. So, for any of you that needs a knife, I have a map of Seer’s Village with a knife spawn somewhere down below so you can find out. (I never can tell where these blasted images go when writing.) 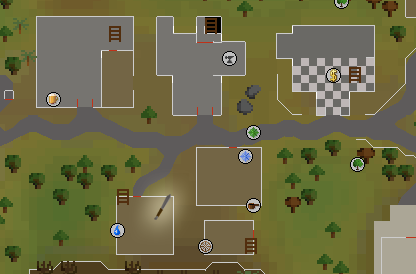 Although fletching is no money saver when it comes to buying all the supplies, it is indeed much cheaper than some skills like smithing or construction. The cost isn’t nearly as significant as buying several adamantite bars or mahogany planks, nevertheless I wouldn’t call it the cheapest skill like agility.

Well, during the time I received 99 fletching, it really hurt my wrist stringing all the bows. Fortunately, I didn’t use up several hours at a time to work on it or else I would have been diagnosed with a severe case of carpal tunnel.
Nowadays, we have a string-x option to string them all. While this may be a dream to your neck, I have always found it to be slower than the classic way of it. Or, as I would say it in the real world, “slower than Pangaea.”
Fletching really doesn’t have much purpose other than making a bow here and there when you just need a basic bow, or if you want to make over nine thousand arrows for your little magic shortbow that I don’t ever see anymore. *sob*

In all of the different ways that I explain below, they are all optional and really you can do whatever you want. Perhaps say that you start with 2,000 logs instead of the said 1,000 logs in which I would do. It really is your preference and I am not the type to demand you to do a certain way.

Okay so you are level 60 fletching, and you want to get level 85 quick and fast. You have 30 million gp to burn off here and now. By all means, go buy all of the materials that you would require. In order to figure it out, I suggest using the RSBANDB calculator.

Once you have created each completed yew bow, I suggest that you take out some nature runes and alch them all for more profit than the GE. However, when I say profit, the probability of getting more than what you bought it for is relatively low at the moment. Nature runes and bowstrings are quite elevated in price for the time being.

Instead of just getting the fletching experience, you can receive the woodcutting, crafting, and runecrafting for making all of the materials that you need. This may be a slow way to do it, but it is normally how I would approach things. This is mainly because I am too poor to buy anything else.

The previous two are just the basic of basics. Something I have learned to do, would be to buy the flax, the nature runes, but then cut my own logs. It is cheaper for me to do it that way, but it doesn’t require massive loads of work. Other ways involve just buying all the materials. Then just sell the bows.

You have heard many times that fletching is just a stupid skill that has no point. Well, firemaking and dungeoneering are the same way; they both have people that enjoy them but really have no use globally. I actually enjoy doing fletching, and I like to make things with wood. Hey, that is just me. I hope I got you to see a little different glimpse of fletching other than the common hatred I see all the time.