Recently someone asked if I could put more sleep into my articles, so today I’m writing an article entirely dedicated to sleep!

Ahh, open those eyes! Don’t you even think about closing them. Just because we’re going to talk about sleep doesn’t mean you can doze off and leave me here rambling.

Now, about sleep in RuneScape.

In the beginning of Runescape classic(RSC) it was possible to train skills constantly like we can do in RuneScape 2(RS2) today. It hadn’t always been like that though. In early 2003 Jagex was having problems with autoers and macro users abusing this continual training ability. Players could login in the morning and then set an autoer up before they went to work or school and when they came back six or eight hours later they’d have either lots more levels in certain skills or more resources or both. The autoer would continually repeat the process that the player would normally do when they were controlling it.

To curb these autoers Jagex introduced an interesting new idea, Fatigue. Fatigue showed up on the skills & stats page, though it wasn’t a skill in itself. 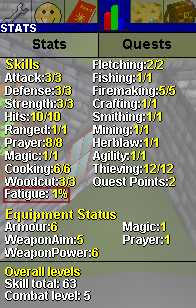 Doing almost anything in Runescape classic after this update would make your character gain a small bit of fatigue. Below is a list of some activities and their rate of fatiguing:

All the points would add up together to eventually reach a maximum total of 100% fatigue. Once you reached 100% fatigue you would no longer gain experience. It’s easy to see how fast fatigue could stack up. One would only have to do 33 laps at the Barbarian outpost to achieve 99% fatigue or spin 100 bowstrings for 100% fatigue. This prevented the autoers from raising skills quickly since not too long after starting a skill they would be fatigued.

To remove fatigue a player would have to go to almost any house in Runescape and use the bed there to rest. 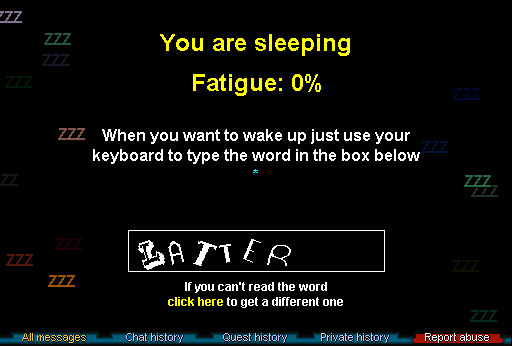 Beds would lower your fatigue pretty quickly which would allow you to return to skilling and gaining experience. Alternatively a player could buy a sleeping bag to use to rest anywhere, though these didn’t reduce fatigue as quickly as beds. To stop resting you would have to type whatever word showed below, much like modern day captchas used to stop auto-registers. Unlike modern captchas, however, which use random strings of numbers and upper & lowercase letters, the rest screen would use real words ranging from 5 to 9 letters long. Because the words were from a set library it was fairly easy for autoers to find a way around this.

Due to this and the fact that most legitimate players complained about the annoyance of the fatigue feature, it was removed with the release of RuneScape 2.

Now, a common question in Runescape 2 is:

“If we have beds and can yawn and have chairs and can sit down, why can’t we lay/sleep in our beds?”

That’s a good question. It seems like it would make sense to allow players to sit on or lay on their beds in their Player Owned houses since we can sit in our player owned chairs and even sit on the ground to regain energy faster. I think the main reason they haven’t allowed this is because some players would imply things against the rules when referring to the beds in their houses.

Here’s an interesting idea, what would RuneScape 2 be like if Fatigue was re-added? Can you imagine going through the fight caves and having to sleep in your sleeping bag half way through? Or chopping a few loads of logs or catching a few loads of sharks and then having to rest? When training agility you have to rest every 30 laps or so. You can only do one or two runs of Pyramid plunder before having to rest. Just fletching logs in the bank requires you to rest every hundred or so. Below is a list of a few quantities and times for Runescape 2 based off the fatigue charts of Runescape Classic.

It’s pretty easy to see how fast that fatigue would add up, so be glad you can’t sleep in RuneScape! 🙂