You also need to have the following quests done in order to start the quest:

Other News can be found here.

Cool and New things that came with this Release,

The spoilers list has not been shown yet on the main page (the quest was released on May 13th).

This is the final quest in the Fairy Tale quest series.

A bug happened that made the quest appear twice on a players adventurer’s log.

With this update, Zanaris was updated, but Jagex forgot to change the Fairy Shopkeeper, Lunderwin, Jakut and the Otherworldly being Irksol.

The log shortcut and the Mango Tree are the first HD graphics updates in Ape Atoll.

After the quest, there are hidden rewards that you can gain.

You can now obtain the Helmet of Trials and not have to do Nomad’s Requiem.

A bug occurs when using the Fairy Ring with the CLR (The new Ape Atoll fairy ring) code. Immediately after getting then activating a greegree would cause the player to get very stretched.

It’s been almost 4 years since A Fairy Tale Part II – Cure a Queen was released so hopefully you’ll remember the plot behind it. If not you will be briefly updated on what happened when you use the fairy ring to get to Zanaris (Future Note, I did this quest with Fairy Nuff’s certificate destroyed and coming from Edgeville into Zanaris).

If you’re going to Zanaris from anywhere outside of Zanaris (by that I mean a fairy ring) you will be teleported to a small area and Fairy Very Wise will confront you and then briefly update you on the current situation. To my knowledge if you’re teleporting anywhere from inside Zanaris you’ll be confronted by Fairy Very Wise when you teleport anywhere.

She will offer to teleport you to the Fairy Resistance HQ this one time but also cast a spell on you that now you only need to put in the final code when teleporting to the Fairy Resistance HQ. Go and talk to the Fairy Queen and she will tell you to talk to the Tooth Fairy. So go and talk to her and she will tell you to turn on the projector to watch a briefing. (WARNING: If you have problems with epilepsy, do not turn on the projector). After that briefing, you will need to watch another briefing. After that briefing, the Tooth Fairy will ask you to get her wand from her house north of the bank. You will need a tooth extractor to get into her house and that can be made by using a hammer on some secateurs. Use the fairy ring to get back to Zanaris and look for Gnarly north of the bank.

Use the Tooth Extractors on the door that Gnarly is in and head in. You will need to have at least 37 summoning points remaining to talk to Gnarly or else he will bite you for a little amount of damage. To get him to give you the wand you want, you will need to compliment him and his teeth. He will also want some milk after you have complimented him enough. There is a bucket spawn right outside of the house and some cows you can milk are just east of the wheat field. Heading back to give Gnarly his milk, he will tell you he wants to go with you to give the Tooth Fairy her wand and you can’t find a way around it. So head back, give Gnarly to the Tooth Fairy and you will get another briefing. This briefing will tell you how to kill the orks and what to do to get rid of the Fairy Godfather. With the tooth extractor in your inventory, head to the yellow flower directly south of you (depending on where you were watching the briefing) and wave to the Tooth Fairy. The TEEF will get to work and you will soon have one of your teeth removed.

Now while this article is getting a little long, not much more happens. You take some teeth, watch Orks whine, figure out a way to get rid of the Fairy Godfather and then finally get rid of him. The rewards are well worth it so here is the rewards scroll. The rewards will be explained more in my thoughts on the quest. 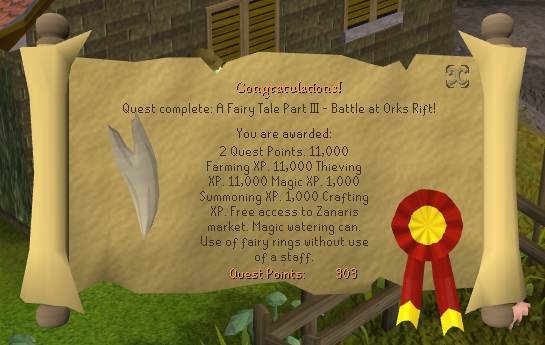 This was the awaited end along with update to Zanaris that everyone was talking about (at least all of the Farmers at RSBandB). The Magic Watering Can will get rid of a spot in my bank; however, I wish it was wieldable. Free Access to the Zanaris Market place is somewhere I have been once or twice so not really worth it to me. Being able to teleport without a lunar/dramen staff is without a doubt the best part of the quest rewards. No more need to remember to bring it, or if you died and you need to get back to where you were, one extra spot for some food. The Tooth Creature you can get after the quest is a nice pet. Easy to feed (bucket of milk) and seems to grow quite fast. You will also have the ability to talk to Martin the Master Gardener after the quest to have him tell you that he has talked to gardeners and they will keep your farming patches weed free. Do not forget about the hidden rewards. I am glad, but sad to see the Fairy Tale quest series end. It was a fun one to complete and its finally gotten rid of those orks that were making Zanaris their new home. Good job Mod Tytn H and Ingrid J, I really liked the quest, and I’m sure everyone else liked it. This is all I have for now, Tim Out!