Those who were playing last year will remember the Heir Splitting trouble when EB Jr. did not want to take his father, EB Sr.’s, job. Thankfully this year EB Jr. is not the brat he was last year. Unfortunately he still has not learned to operate the Factory like his father used to.

You will find the Easter Factory bunny hole in the place it usually is, South-east of the Crafting guild and North of Rimmington. Once you get there you will notice a small brown squirrel with face paint named Charlie. Talking to him will reveal that the Big E has again caused himself problems and now requires some help. Of course you can not just ignore the E’s problems, so once you bank all of the items in your inventory (Charlie will do a one time free bank, but only once) head down the rabbit hole. Easter Magic will make you the right size (and shape) to fit through the hole.

Head north once in the factory to a large room which you might remember from last year. In fact, if you did last year’s event you will notice almost the whole map is the same. Probably the first thing you’ll notice when you enter the room is the Ice troll named Easta Buni(Ee-stuh Buh-neh) talking to the Big E himself. Talk to either of these to interrupt the conversation.
You will learn of how Mr. Buni got his name and that he likes Rock Cakes.
You will also learn to avoid crazy caffeinated squirrels, especially if their name is Charlie.

Most importantly, however, you’ll learn that the Oven is broken and that EB would like you to fix it, so head on over to the oven(which is located almost directly outside of EB’s room).

Talk to the nearby Impling Manager to learn why the oven is not working. Grab the dirty components from the oven and then head a few steps north to the water tank in the wall and use each one on it to clean them. Once clean just use them on the oven again to put them back.

One odd thing I noticed throughout the whole event was that many NPCs used the word “butcher’s” instead of “look” alot of times. I don’t think this is purposeful but I don’t see how it could be a typo.

(Editors note: “butcher’s” is an example of rhyming slang, one of the many words used in the event by Jagex.)

Head back to EB once you’ve repaired the oven.

Like usual, there is more than one thing you have to fix. Next in line is the Egg-Painting Machine. Mr. EB says the Head Imp of Egg-Painting is out of paints and asks you to go help him(What we do for Easter!).

The Imp says the supplies are somewhere around here but they don’t know where, so he asks you to take a butcher’s around for them. The crate that the supplies are in is random for everyone. Some say it is always the second to last crate, other’s say last… me? I say it’s random. On my main it was in the last crate, on my secondary it was in the fourth. It does not matter where you find it, but once you do head back to the imp and he’ll unpack it and give you the items: red, yellow, and blue glaze, a color wheel, and a bowl. 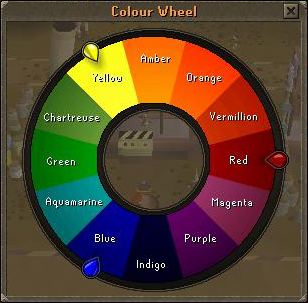 Once you have made three glazes the Head Imp will say you are done helping him and that you should report back to Mr. EB.

Upon return you’ll notice a little green dude (AKA, Goblin) named Phlegm Knee talking to the Big E about Red and Green somethings. After a brief share of pleasantries with the LGD you’ll tell Mr.EB that you’ve finished dying, er, working with the glaze imps, and he’ll give you the next task, training the Nut Sorters. 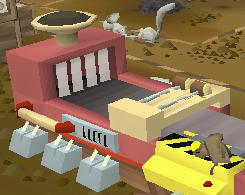 Head on over to Big Ben (no, not the great clock in London, the tiny squirrel in the cavern) and he’ll tell you how to operate the machine.

Now if you were here last year and have a decent memory, you’ll remember that we did this same EXACT training last year. I’m rather disappointed that Jagex completely duplicated part of their event. 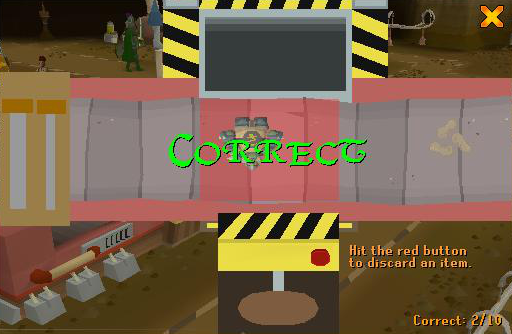 Once you are done training the squirrels and playing with Graardor plushies, head back to Mr. EB.

Now you learn that the goblin was ordering Red and Green Fireworks! The question is, why is the Big E selling fireworks?

Apparently our characters do not think that is important because they get directly to the point and tell Mr. EB that the training is done. Of course cleaning an oven, making dye, and training squirrels is not all you must do, there is always one more thing, and in this case it is being a motivational speaker.

Head on over to the Easter Bird (which lays eggs and is referred to as ‘he’ o.O) and try out your motivational skills.

After a quick lesson in the ABC’s of being an Easter Bird you’ll get him going again, so head back to Mr. EB.

HUH?! Where did HE come from?

Upon return to the Big E you’ll again interrupt him, but this time he’s talking to a hooded client, who is distinctly Elf-like. After a short session of eavesdropping the Big E will put you in charge of the factory, at least for now.

This is a game of resource management. You need 7 of each fruit cake, Tangy egg bred, and Nutty eggs. Making these requires a total of 14 of each chocolate, nuts, and fruit. There are many strategies to completing this within 15 turns so I’ll let you make your own.

Once you complete it talk to Mr. EB again. He and the hooded client will ask you to make the three final deliveries to Falador, Varrock, and Lumbridge. He’ll give you a delivery box and a delivery map. The map works just like the normal world map except that it has 3 added blue markings to denote where the tree couriers are.

This is the first time an in game item has been able to open a fully functional world map.

Once done return to the Easter Bunny for your reward. 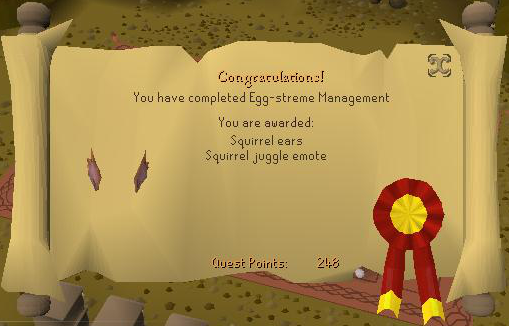 If you completed the Factory management in 15 turns or less then you can summon both Charlie and Fluffly for a few minutes every half hour. Neither squirrel is an actual pet like members pets because they do not have a summoning tab. They also disappear if you teleport or log out. If you did not complete the management in 15 turns or less you can return to the Easter Bunny and ask to manage the factory again. You can re-try this until the event is removed.

The Squirrel ears emote allows you to do some interesting things….

Overall I liked this event’s storyline better than last year’s but I disliked that most of the tasks were nearly exactly the same thing as we did last year.

Have a Happy Easter everyone!