The Constitution of Independence

I would like to constitute that this is in fact, a real article and not fiction. I would also like to represent all my regards to the death of the hitpoint skill, for the renewal of it, is called constitution. Good evening, ladies and gentlemen. I am pleased to present the latest addition to Runescape, the Constitution. In which case, it is not the most perfect thing in the Universe. Well, multiverses if you believe in new sciences saying that we weren’t necessarily created by the Big Bang.

With the multiplication of ten to everything, more damage is dealt in a higher rate. Or is it? You would think that by hitting 246, that you are only hitting 24, but the .6 is that much more and could add up in the long run no matter how small. Let me explain a little bit more in depth. Say before constitution, you get a 24, 15, 19, and 17 on a monster. After the update, you end up hitting 248, 143, 192, and 167. Even though some of the numbers are lower than previous numbers, you still kill the 75 (750) hitpointed, or shall I say constituted, monster.
The name, Constitution, flows with nothing I have ever heard of before. While it may take some time to get used to, it definitely is a better name than hit points. Although, it will collide with Construction when shortening it down to “con” so perhaps something like “cnst” will be used (although that abbreviation could easily be used for Construction as well). I’m not sure what will be used, but we, the people, will figure something to use.

Another thing that adds to the update is mainly for the OCD people like me that like to look at our stats interface and not have any defects in it. Since constitutional changes are moved to the left of my mini-map, I now don’t have to bother with the constitution skill since it doesn’t change at all. 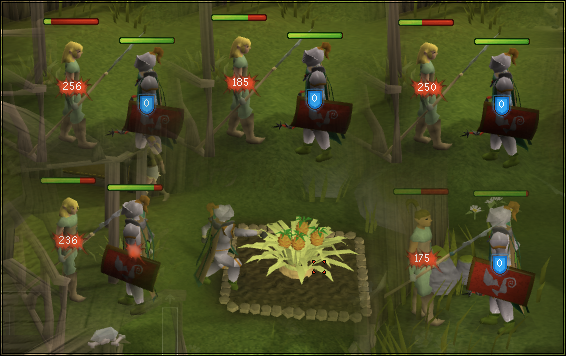 Well needless to say, this update wasn’t too necessary for anything. Perhaps it will help in the long run with future updates and the new skill, but it could have been changed when it does come along. It also confuses me badly with such high numbers.

I recall hitting over 100 in the anger quest was astounding, but now it is redundant and is too many numbers to compute. In several other role-playing games such as Final Fantasy or Fly For Free, there are huge numbers to deal with. However, in these games the numbers aren’t too important; the visuals are.

The biggest problem is most likely the complaining. Although it was needless and unattractive to high-level players it isn’t that big of a deal. I think that we just need to think of the old way and put a decimal point after the tens place. In that case, it will look like your doing it the same way as usual, and you could be dealing more damage in the long run.

Overall, it was an okay update. It was something that wasn’t too big of a deal and it just brings up the quote “Don’t fix what isn’t broken” more often. I will give it a 3 out of 5.1 just because of the name change. While it brought some more spice to it, it just makes it harder for the older generation to process things. It’s like taking a crowbar to our computer and telling us that this is how a computer should look like. This Constitution has now been broken.