You’re probably thinking I’m a bit late for advising people on what to do with their time, aren’t you? Well this article isn’t about what you should have done or what you should do next time, as I don’t know what activity would be the most efficient for you.

As I’m sure everyone knows, Jagex had an unexpected mistake with their Bonus multiplier which resulted in the first 10 ‘Super bonus’ hours being cut short by 3 hours. 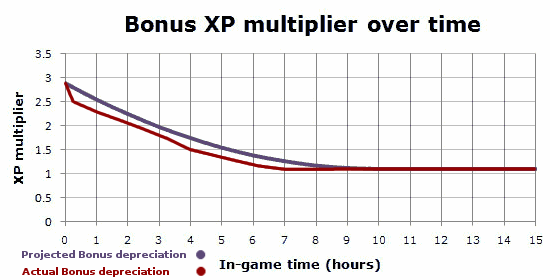 After 15 minutes the multiplier went down to 2.5, which as you can see wasn’t supposed to happen for an hour. This quick drop in modifier was quickly noticed by players who promptly posted on the Official Runescape forums. JaGeX looked into the problem and found that their formula was rounding a little faster than it was supposed to.

“From our checking of it it looks like our rounding functions are being a little overzealous. Since we are squaring some figures after the division, it means that this rounding is exacerbated a little.”
-Mod Fnord
Quick find code: 15-16-608-60568453

‘exacerbated’ Is an odd word to use because it means:
1. to increase the severity, bitterness, or violence of (disease, ill feeling, etc.); aggravate.
2. to embitter the feelings of (a person); irritate; exasperate.

That word describes the reactions of a lot of players very well, unfortunately. Just a few posts below Fnord’s post is a player asking for a rollback. The reason they didn’t do a Rollback is because there was really no point. The Bonus experience had only just started and I doubt Jagex had made a backup of all their players accounts right before it started. This means that a rollback probably would’ve knocked all account’s back to 12 hours prior(midnight GMT of Thursday). This would’ve caused even more trouble as players who had gained experience, items, or done quests during that time would be immensely angry. To put it in perspective of what the players could have lost, they may have been at the GWD and had gotten an Armadyl hilt, they may have just made a 99, or they might have just defeated Nomad or completed While Guthix Sleeps. A rollback would’ve removed all those accomplishments.

Now the question: Why didn’t they just fix it and -bang- good as new?

They couldn’t just snap their fingers to fix it because, though they knew what the problem was, it would take a fair bit of time (As Fnord said in a later post) to actually fix the problem, double-check calculations, and then update the game. This would prevent many players from getting ANY of the Super-bonus experience as some players were only able to get on Friday and the update with fixed experience probably wouldn’t be ready until Saturday. Doing this would also shorten the total time of the event since all of Friday would’ve been lost because they would’ve disabled the bugged bonus on Friday.

If Jagex had fixed the problem this way, some players would’ve gotten the extra 3 hours but many wouldn’t have been able to use this extra time.

“I believe that fixing it now could cause more problems. It’s probably safer that we leave it as it is, everybody gets the same rate and we use this as a learning experience. It’s a shame that those who calculated their XP in detail may have to adjust plans, but then that is down to player choice. Everybody is still getting extra XP this weekend.”
-Mod Mark H
Bottom of 2nd page.

“Yeah,
*hands raised*
My bad on this. The rounding of it wasn’t really apparent until now. My apologies to you guys.
It is only .15 at the highest amount, which isn’t a lot, but I know it can be significant.
We will be looking through it for next time.”
-Mod Fnord
Middle of 3rd page.

“We do test it all. But, as people are only too aware, no software is perfect, and even some bugs get through the QA process.
I raise my hands. It is my mistake.
Sorry guys.”
-Mod Fnord
Middle of 4th page.

“I think people deciding to be nasty at us is a little unpleasant. We did work awfully hard, and we responded within the hour to issues that have come up. And we have explained, with as much detail, about what is going on.”
-Mod Fnord
Middle of 9th page.

It’s unfortunate that so many players have been so bitter in response to this. None of them seem to realize that Jagex didn’t have to give them a bonus experience weekend. This could have been just a normal weekend.

Many players’ complaints were that they bought a certain amount of supplies because they had calculated exactly how many they’d need based on the chart shown in the Dev’s blog. They said Jagex wasted their time and money. Think of it this way: If Jagex hadn’t given us a bonus experience weekend then you would’ve spent more time and more money when you eventually trained that skill that you’re complaining about.

When you think of it there really is no reason to complain over this small bug.

Now the question: When is the next one?

I can’t say for sure, but I’m 99% sure there will be another one and it will most likely be later this year. Will it be F2P? Most likely, because so many people enjoyed this one (despite the few who complained). Jagex has also been improving their F2P support; they recently expanded the forums to more F2Ps and added a new F2P quest.

And now for some random useless trivia!

With the total times I got from members around RSBandB the average for this weekend was: 24hrs:56mins, or 8hrs:18mins:30s per day

The total levels gained by RSBandBer’s registered on the RSBandB Hiscores was: 399 or 133 per day

70% of that Summoning experience went towards the SKOTM.