Tricks of the Trade: Barbarian Assault Attacker and Collector

Welcome back. This is a continuation of my Tricks of the Trade series and Being a Barbarian Assault Attacker and Collector is what I am going to be talking about today. Since the Barbarian Assault update I have, maxed the Defender Role (with the help of Alex’s guide), completely filled my Penance Master horn, and maxed the Attacker and Collector role! Because Collecting and Attacking are so easy, I thought, why not make put them together into one article. It’ll make things much easier because they are so closely tied together, and they are simple roles. I’ll start by talking about being an Attacker, as it’s my highest ranked role, and it’s quite simple once you get the hang of it.

Since my last article I have updated my Barbarian Assault outfit. 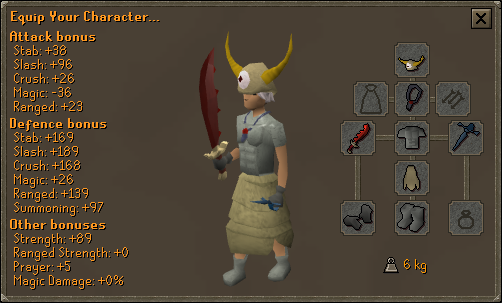 I decided to get this outfit for two reasons. 1, people will recruit me much faster if they see I have this outfit. And 2, it restores my prayer over time when I am wearing a Hat, Fighter Torso, Penance Skirt, Penance Gloves and Penance Boots. The reason I have the Runner hat is because I like the look, but since the last update, when have given back the hat’s bonuses that they had before so the Fighter Hat would be the best for being an Attacker, it gives attack bonuses. Anyway, back to being an Attacker. The bonuses that you for levelling your role is that you hit higher with each level up. Level 1 you hit your hit +1, level 2 you hit your hit +2, etc. So at level 5 you will hit 5 no matter what. The only time you hit lower than 5 when you’re maxed is if you’re doing the wrong attack or the enemy has lower than 5 hp remaining.

As Attacker your enemy are these guys,

You can use Magic, Ranged or Melee to kill them. If you’re 94+ magic Vengence will work on the Rangers and Fighters so you can cast it and have damage rebounded to your enemy. I would recommend staying on Lunar and use Melee (or if you have a high ranged level Ranged) to kill the Rangers and Fighters as it will be really fast. I normally go to Barbarian Assault with a Dragon scimitar (my main weapon) and a Dragon Dagger P++ and take out them that way. I start off with the Dragon Dagger P++ as long as the type of attack I need to do the Dragon Dagger can perform. F1 and F5 are going to be your best friends when playing. F1 brings you to your Inventory Screen and F5 brings you to your Attack Style Screen. The Collector and Healer also help, but if you have a second Attacker and they have low melee stats, you can send them to the Horn of Glory and have them call for you. Once you have killed off all of the Rangers and Fighters, you can help out the Defender or Healer. Either use the Egg Launcher and take out the Runners or Healers, or block the Runners from getting past so you don’t lose points for them getting through. Now before you post that you lose points when you use the cannon, you’re wrong. It’s a myth and it doesn’t happen. They’ll say that but don’t listen, it’s not true. Shoot away, unless your Defender tells you to stop as they want to get more points. Oh, I almost forgot the most important part. You call to the Collector. The first choice you get on the horn is to call “Red Egg”, then “Green Egg” and finally “Blue Egg”. Do that until the Queen and you’ll be fine. At the Queen your role is to put spikes onto the poisoned eggs you get from the Healer. On wave 10 you honestly don’t really need to care about calling to your Collector and worrying about what attack you are doing. You will get 80 points no matter what so take your time, but not too much time. Only 8 eggs are needed, so if your team doesn’t already know, remind them it’s only 8 eggs. Once you have put spikes on the eggs pass them to the Defender and if you have full hp, head over to the Egg Launcher and be ready to fire!

That’s all you need to be a Barbarian Assault Attacker. Now for being a Collector.

This role is the easiest to play. All you do it pick up eggs. The Attacker will tell you what to pick up and you reply with what kind of attack style they need to attack with. The bonuses for having a higher Collector level is that you can convert more eggs at a time. The collector dispenser will convert Blue Eggs into Green Eggs, then Green Eggs into Red Eggs. You also get a bigger pouch for carrying eggs, starting at 2 (level 1) and getting all the way up to 8 (level 5). There are really no tricks to getting a good score as a Collector, just make sure you don’t explode too many eggs. Just be a good caller and pick up as many eggs as you can and you’ll get a good score. Don’t be afraid to destroy the eggs. You won’t be prompted about needing to pick another up from the ground and you won’t be punished for destroying the eggs. When you get to the end you will just need to wait until the queen comes. Get 8 eggs then pass them off to a healer. Wait by the Healing pool or go by a lava crater to get the eggs once the Defender if done with them. Load the eggs into the Egg Launcher and have your team take out the Queen. There are 80 easy points.

Overall both roles are easy; you just need to get the hang of them. If I can get another article out this month I am going to be doing it on the ways to get level crafting. I hope this guide helps out. PM me on the forums if you want me to do a Tricks of the Trade article on something you want to see. I’ll do my best to cover all parts of it. But until next time, Tim Out!